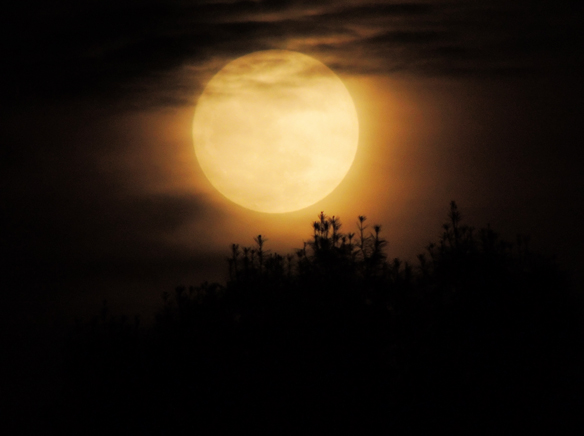 I’ve been a little loony over the moon for the past several years. I follow its stages and path every month, becoming almost giddy when it’s time for the full moon, finding a perfect vantage point to photograph its appearance. Just a few months ago, I discovered Wright’s Field out in Alpine, a pleasant wide, open field with trails leading out to big boulders and shrubby trees with views of the mountains. I kept that place in mind for future full moons.

I’ve been a little loony over the moon for the past several years. I follow its stages and path every month, becoming almost giddy when it’s time for the full moon, finding a perfect vantage point to photograph its appearance. Just a few months ago, I discovered Wright’s Field out in Alpine, a pleasant wide, open field with trails leading out to big boulders and shrubby trees with views of the mountains. I kept that place in mind for future full moons.

About 4:30 in the afternoon on New Year’s Day, I slipped away from the party at our friends’ house in Alpine and drove out to Wright’s Field. I was excited because the first moon of the New Year was to be a super moon; the lunar body would be at its perigee, its closest point to Earth. Normally, we see the moon from an average of 238,855 miles away. The super moon is roughly 16,000 miles closer.

As I approached Wright’s Field, the sky was dense with clouds, but I was still hopeful as there was still some light peeking out low on the horizon. Besides, a super moon exudes much more light than a regular one. I walked out onto the trail to a higher point as the sky filled with more clouds. Just as it was starting to get a little too dark for my comfort, I pointed the compass on my phone to where the moon was supposed to come up. I waited and walked around a little more, glancing back towards the mountains every minute or so. Finally, I saw three streaks of orange light appearing behind the bluish clouds.

It was getting much darker by then, so I made my way back down on the trail to my car, keeping track of the moon’s progress. Suddenly, the moon appeared nearly clear as day, obliterating the darkness around it. The clouds streaking across its face could not blot out the moon’s brightness. It was nearly orange in color—and it was ginormous. Trees looked like small plants underneath its glare.

Nearly an hour later, back at my friends’ house, I continued to shoot pictures of the moon as it climbed higher in the sky. Normally, the moon is simply a round disk as it rises higher, but this super moon was still so large in appearance that I could still see the Man in the Moon. My friends brought out their telescope so that we all could look through it. We oohed and aaahed at the sight of the craters on the moon. From one of the biggest craters, we could see lines running out from it from the impact of the meteor eons ago.

The year 2018 will be a good one to keep your eyes on the sky, as there will be several astronomical oddities taking place, the first one being a blue moon. Once in a blue moon means that a second full moon appears within a month. That will happen on Jan. 31. What’s more, it will also be a super moon, just like the first full moon’s appearance on New Year’s Day.

With good photography, the super moon on Jan. 31 will appear humongous, as did the one that started off this year. It is best to find a good vantage point for such a sight. Mt. Helix, of course, is one of the best. From high points in El Cajon, you will be able to see the Super Moon peeking above the mountains to the east. Wright’s Field in Alpine is a nearly perfect vantage point, but you have to wait a little longer for the moon to rise up over the mountains.

The moon will rise at 5:51 p.m. on Jan. 31, and the sky will be somewhat dark because the sun will have set at 5:20 p.m.  On the evening before, however, the moon will be 99.9 percent full, with the sun setting at 5:20 p.m.  Sufficient light will remain in the sky to enable you to watch the moon come up with a pink or orange tint if the sky is clear of clouds.

To make matters even more interesting, during the time of this full blue moon, a lunar eclipse will take place in which the sun, Earth and the moon are aligned, putting the moon in Earth’s shadow. The sunlight refracting through Earth’s atmosphere gives the lunar surface a reddish hue, an effect known as a blood moon. But here in San Diego and all of the United Sates, except for Alaska and Hawaii, we won’t be able to see that astronomical event.

For a truly good photograph of the full super blue moon on Jan. 31, a DSLR camera is most often recommended with a lens up to 600mm. A trick of professionals is to photograph the moon above a building, a city skyline, or even some trees.

It is also possible to get an extremely good image with a zoom camera. The rule of thumb for photographing the moon is the same as for a DSLR. Even more surprising, the smart phone can yield beautiful images of the super moon. It’s a matter of focusing on the correct light balance. Tap the screen and hold your finger on the moon to lock the focus. Then slide your finger up or down to darken or lighten the exposure. The mood of the moon changes with each light gradient.

If nothing else, just get out and see the first month of 2018 end with this history-making super blue moon.