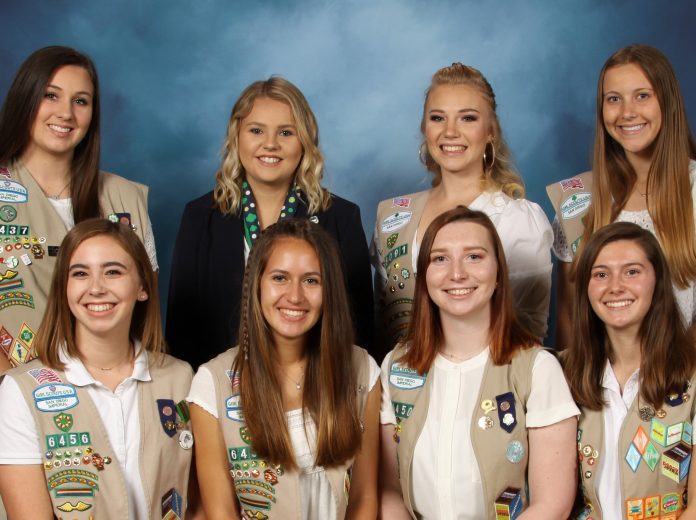 The Girl Scout Gold Award is the highest achievement in Girl Scouting, with just six percent of Girl Scouts nationwide attaining the ranking. During a recent ceremony,

Most of the honorees were in Girl Scouts for more than a decade.

The Girl Scout Gold Award is the highest achievement in Girl Scouting, with just six percent of Girl Scouts nationwide attaining the ranking. During a recent ceremony,

Most of the honorees were in Girl Scouts for more than a decade.

Participants gained new perspectives, breaking down barriers while developing empathy, compassion and patience for one another—skills to combat bullying, harassment, and suicide.

Her sisters, Michelle and Stephanie, were all in Girl Scouts, and their mother, Amy Fox, led their three troops. Fox was a member of Troop 6413.

Megan Lee of Troop 5079 also addressed the issue of bullying. When she heard that students at her former elementary school were having trouble getting along, she created a bullying prevention program.

A student at Grand Canyon University, she is a second generation Gold Award Girl Scout, and her mother, Tonya, was her troop leader.

Children in poverty-stricken Malawi, Africa cannot complete their homework after dark due to lack of electricity, so Amelia Sperry of Troop 6486 pledged to “Light Their Way.”

She inspired donations of solar-powered lamps by giving educational presentations to community groups and businesses.

Sperry is a graduate of Valhalla High School, and was on honor roll all four years of high school. Her mother, Laura, led her troop.

Sadie Neville and Sarah Mauricio were both former members of Troop 6456 and have been in Girl Scouts for 12 years. Neville’s mother, Gayle, was their troop leader.

Thanks to her leadership, the club was recently approved by USA Field Hockey as a stand-alone entity. She attends Helix Charter High School, where she is the captain of the varsity field hockey team.

When a soccer teammate was diagnosed with high-grade osteosarcoma, Mauricio noted a lack of awareness about the disease, particularly among teenage athletes.

Considering the importance of early detection for this type of cancer, she educated high school athletes and created care packages for cancer patients.

Mauricio is currently a student at Helix Charter High School, and has been the Club Soccer team captain for the past three years.

Megan St. John of Troop 6450 channeled her love for the ocean into developing workshops for middle school students on how they can make a difference in many ways.

The Ecology Club at Santana High School—her alma mater—will continue teaching her lessons in the future.

St. John attends UC Davis, where she is majoring in Wildlife Conservation.

As a result, participants gained the tools and skills they needed to unite their community in a safe, spirited, and responsible way.

West was a member of Troop 6276, and her mother, Sandra, was the troop leader. She currently attends California Polytechnic State University San Luis Obispo.

To foster better communication between her church’s deaf and hearing communities, Sydnie Brown of Troop 6091 taught dance and American Sign Language classes to preschool-age children. Her dance students later performed during a church service for a mixed group of hearing and deaf community members—bridging a language barrier, while engaging the entire community in meaningful, inclusive worship.

Brown is a 2018 graduate of Helix Charter High School. She is a third generation Girl Scout, and her mother, Jennifer, was an assistant troop leader.

Alice Dizaye, a former member of Troop 5294, let her love of airplanes guide her project. She worked with the San Diego Aerospace Museum to restore and exhibit planes and memorabilia.

Among the displays she worked on was a 1970s hang glider, complete with a mannequin female pilot.

Dizaye is a graduate of Santana High School. In her free time, she also volunteers at the Air Space Museum.

Girl Scouts is the world’s best leadership development organization for girls. Through programs focused on the outdoors, STEM, entrepreneurship and life skills, Girl Scouts prepares girls for a lifetime of leadership, success and adventure in a safe, girl-focused space.

All girls in grades K-12 and adult volunteers are welcome join any time during the year. For more information contact Ana Luisa Ponce, 619-610-0715 or aponce@sdgirlscouts.org.