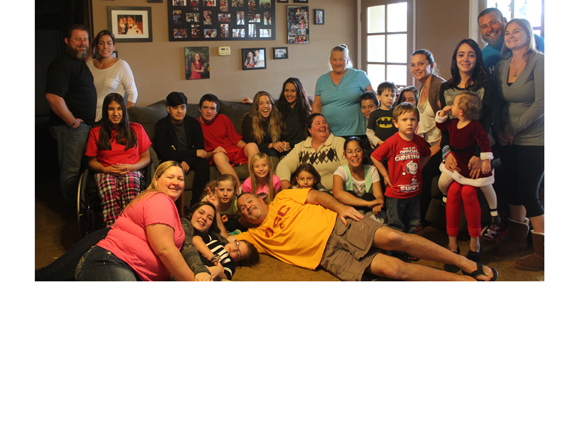 A very special fundraiser for a Lakeside man and his family is planned for Friday, Oct. 16 at the Lakeside VFW. Diagnosed with colon cancer in December 2009, Alex Morgan has made it his last wish to have his family together in Idaho for Thanksgiving. The fundraiser will help make that possible.

“I am so happy and hope to be well enough to make the fundraiser event,” Morgan said.

And why Idaho for his family Thanksgiving?

A very special fundraiser for a Lakeside man and his family is planned for Friday, Oct. 16 at the Lakeside VFW. Diagnosed with colon cancer in December 2009, Alex Morgan has made it his last wish to have his family together in Idaho for Thanksgiving. The fundraiser will help make that possible.

“I am so happy and hope to be well enough to make the fundraiser event,” Morgan said.

And why Idaho for his family Thanksgiving?

Idaho is wide open and peaceful,” said Morgan, who had wanted to move to Idaho, but his declining health prevented it. Idaho has been the family’s favorite place to travel.

Hospice has been coming for a month and half now for Morgan. Melissa Sargent said that while the past six years have been sad and difficult, her dad’s attitude helped both himself and his entire family gets through them.

“It has been a whirlwind journey,” said Sargent, who is the president and founder of Hearts and Hooves in Ramona.

Morgan has undergone three surgeries and countless chemo treatments. Since the initial diagnosis in 2009, the cancer has spread to his bladder, lung and throughout his blood.

“My dad has taken these last six years like a champ and always been positive and uplifting! He would joke that his week-long chemo he had to have a few years ago for many months was his girlfriend,” Sargent said.

Morgan has been faithful, though, to his family, married for 41 years to his wife Linda. She has been by his side during the whole battle with cancer. They have nine children, including six whom they adopted, with Sargent as the oldest adopted child.

“He has been there for each and everyone one of us and our children at a moment’s notice,” said Sargent.

“We have all called him and said, “Dad, I am out of gas,” and before we can ask, “Can you come get me,” he is on it. He has been our biggest fan in any and all of our ventures in life even if he did not 100% agree,” Sargent said.

Morgan is dedicated to his grandchildren, too, teaching them to drive “Bertha,” his Ford truck and showing them how to be the best they could be by giving 100% to what they do.

Sargent remembers how he taught her to be the best she could be. When she was 15 years old, Sargent desperately wanted a horse. Her father told her that if she wanted a horse, she had to get a job. So she began working at East County Feed and Supply and saved up enough money to buy the horse she wanted.

“Dad went with me and the trailer back to the ranch. He has always been my right hand man with training horses since then,” Sargent said.

Family members have all in different ways helped Morgan through his fight with cancer.  Sargent’s older sister has been back and forth from Florida, Virginia and Los Angeles to help as she can. Her brother and his family help with the yard work and visit often. Another sister and her family travel back and forth from Idaho constantly to visit Morgan often. Other out-of-state siblings call often and Skype.

Sargent’s sister Juanita Curtice, who is also married with two children, has helped get together their father’s dream for a fundraiser. She contacted two Elvis Presley impersonators for the ETA concert, benefiting their father’s holiday wish. The VFW donated the hall to the fundraiser, since Morgan is a life member.

“We both have a go get ‘em attitude and if we want something we work hard to achieve it,” Sargent said about herself and her sister. “We want nothing more than to be able to give our dad his holiday wish. My Dad would never ask for help, so we are.”

Curtice agrees. “My Dad has always been my Elvis. He is the strongest man I know. I love him dearly and cherish every single day I get to spend with him,” she said.

The fundraiser will feature dinner and a show for all adults and children. Tickets are $25 general admission.

El Cajon Police Department reaches out to the community in efforts...

Happening at your El Cajon Library