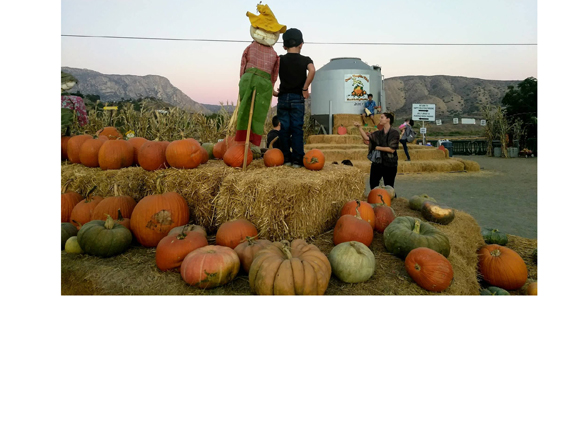 A couple of miles down on the El Monte Road in Lakeside, you are going to lose your cell signal and may have to rely on your observational skills not to miss the big metal canister on the side of the road functioning as a directional prompt to slow down your horsepower and turn left on the dusty country road toward the Van Ommering dairy farm. Did you know pumpkins are fruits, 90 percent water and have family ties with the Squashes?

A couple of miles down on the El Monte Road in Lakeside, you are going to lose your cell signal and may have to rely on your observational skills not to miss the big metal canister on the side of the road functioning as a directional prompt to slow down your horsepower and turn left on the dusty country road toward the Van Ommering dairy farm. Did you know pumpkins are fruits, 90 percent water and have family ties with the Squashes? Well, these are legitimate questions, because it’s Pumpkin Patch time and Oma’s dairy farm just opened for the season, charming kids and grown-ups alike with wild fun, hay rides and pumpkins waiting to be taken home, slashed, smashed, made into pies and decorated for Thanksgiving and Halloween. The farm is open from 10 a.m. to 7 p.m. Tuesday to Saturday, because “Sunday is God’s day and Monday is our day,” as per Brenda Van Ommering’s cheerful confession. She is one of the owners, wearing all orange, including the cute pumpkin earrings dangling softly on the sides of her year-around tanned face belonging to a blond, all-American beautiful farm girl kids mistake for a princess, because they believe farmers are all gruff and stuff. “I am actually part Dutch and I claim every little bit of that. You know, “Oma” means “grandma” in Dutch.” she says, laughing at the confusion. “ I didn’t grow up on a farm like my husband, but my grandfather had a dairy and I always wanted to be a farmer. So when I was five, I told my dad that I want to marry a farmer. And I did!” She points out lovingly to Dave Van Ommering who is securing the passengers for the last traditional hay ride of the day. The moon is already up, lightening up the valley and soon the little kids riding on hay and wooden horses or sliding down inside tunnels made of rubber may hear real coyotes up on the surrounding mountains and the barn owls in the old oak trees around calling for their own peers to play.

There are so many fun things for the kids around the farm. The excitement starts way before coming into the gate, when the animals are visible from the road. Petting the cows or the sheep and goats and llamas is one of the biggest attractions. There are several playgrounds with sand piles, pedal carts, a soccer field, a hay bale maze and a milk bottle bowling alley, the covered stage in the back where the kids can play dress up in costumes and meet Ana and Elsa and there is also a trampoline made of hay just perfect for the brave somersault survivors. Grown ups are having a blast on the soccer field kicking the ball or throwing the Frisbee and some happy moms could not let go of the tetherballs when it was their own children’s turn. But there it is, just across from the “Cow Country Café” snack bar, the wildest ride at the farm, voted as such by 5 years old Danielle, 10 years old Brandon and the two little girls belonging to the Martinez family who skipped dinner just to go up the cotton seeds mountain slide one more time (actually, twenty times) and roll down screaming with wild excitement. At least 15 feet tall, the slide is built inside a wooden barn where tons of cotton seeds are piled up to offer the ride of a life time. “We grew up in Texas, so we are familiar with farms and animals, but our kids don’t know much about it. They need to see a cow and know the milk is coming from a cow. I don’t think they realize they are rolling down a pile of cottonseeds, ” says Sasha Martinez, now living in San Diego. Her husband, Angel Martinez, loved to play Frisbee with their two daughters, here for the second time out of many more outings to come.

Angie Robertson from El Cajon filled up her van with five kids and only three are hers. The three teens are too shy to say more than they really had a blast here, but 10 years old Brandon is ready to hold the mic and give a presentation, he is so enthusiastic about his experience. “My favorite by far has to be the hay ride and hanging out with my friends.” Robertson is excited that the farm offers so many educational activities and wants to bring the kids back.

Little Danielle Stokes lives right here in the El Monte Valley with her 1 year old brother Darryl. She would slide down the rubber tunnels over and over again. She is happy Frozen Elsa recognized her since the last time they met. Her mother, Jessica Stokes, is thrilled to “have a working farm so close” and confesses, “My kids are at home here. This is a safe and fun environment and we will be back at least four more times until the end of the season. There is nothing better than supporting a local family owned business.”

Dave Van Ommering believes it’s a good thing to “see the kids being able to play outside and have interaction with the farm animals in our petting zoo, considering how much time they usually spend inside on their electronics now days.” The place is the busiest in the mornings when the schools are visiting and also during the weekend. Brenda and Dave Van Ommering are a power couple in Lakeside, well respected and supported for working so hard to keep the dairy afloat. Agro tourism was a choice they made to save the farm, not sustainable on its own due to regulations and new market trends. “The feed is very expensive, also the water, but we have a well. However, it would be different if we would have 20 extra acres of land to grow our own feed.“

What’s new this year at the Van Ommering’s farm? His wife is excited to announce they have “a brand new tractor pulled wagons ride now, instead of a hayride, but they are safer and bigger and red, plus they are covered. That was our big investment for this year.”  What’s in for the future? This is when her husband gets all enthusiastic about breaking the news of a new venture, in the books for a while and still in the planning stages, but much closer to completion. “ We want to build a creamery and call it the “Van Ommering Artisan Cheese Company” and make traditional cedar cheese, Gouda and possibly Brie. We hope to open in about eight months. If that happens, my oldest son, Johnny, who is 21 years old now, may come back to continue the family business. My youngest, Juliana, she is 12 and already likes to help her mom with the pumpkin patch.” The family has three employees and a poll of volunteers who help during their annual events.

Dave Van Ommering’s parents were Dutch immigrants and bought the land in the El Monte Valley four years after coming to America and working on somebody else’s farm first. “ They grew up on dairies in the Netherlands and had the American dream to have their own farm. They always had Holstein cows to milk and always sold to a cooperative,” explains Brenda Van Ommering. Her mother in law started doing farm tours in the early ‘80s when one school showed interest to visit the place and it grew from there. “My mother in law used to offer everyone her famous butter cookies, but I cannot bake that, so I give people ice cream cups.” Both the parents and the kids visiting are happy with this lovely tradition, on top of having a free pumpkin and a bottle of water included in the admission fee for the kids, which is $10 for children under 13 years old and $5 for adults.

Dave’s family and his brother Rob’s wife and five kids are the ones living on the farm now. The brother takes care of the dairy and fertilizer business, while Dave and Brenda are overseeing the agro tourism. Along with the pumpkin patch, they organize Oma’s Christmas Tree Patch in December, Behind the Scene tours for schools in the Spring and also the “Family Day” on first Saturday of June, during the National Dairy Month.

The Van Ommering dairy farm is one of the last four still standing in the San Diego County, after the temporary promising boom half way through the last century when there were over 130 thriving diaries throughout the county.  They are all gone now, due to urbanization. Why are the Van Ommerings among the last ones still standing though, despite the fact that they don’t use any marketing tool and have zero advertising for their events and still count in thousands of loyal and new visitors every year? It must be because of the Van Ommerings themselves and judging by the warmth, generosity and kindness they give and receive constantly, that may actually be the secret to have a successful business in the backcountry against all odds.

All orangey and with a fall season vibe on from the hundreds of pumpkins, Thanksgiving decorations and the scarecrows spread throughout the farm, Van Ommering family is opening their gates to all the other families in the county to celebrate the season by giving thanks and sharing the joy of spending a day out in the country with the people we love.

Involving the whole family can make a Halloween fun and safe...