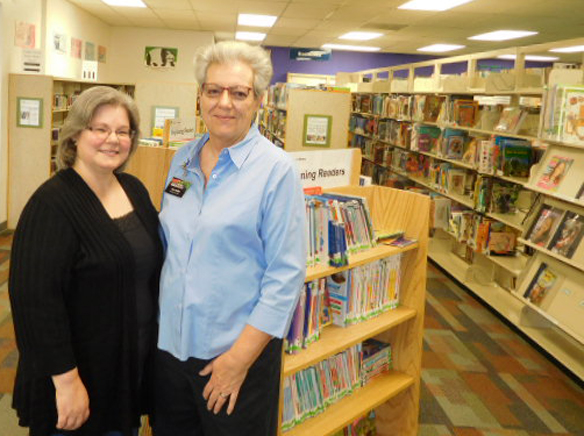 As attendance and circulation figures at Santee’s library continues climbing, a local nonprofit says it’s about time that the city builds a larger, more modern library.

As attendance and circulation figures at Santee’s library continues climbing, a local nonprofit says it’s about time that the city builds a larger, more modern library.

The Friends of the Santee Library, a nonprofit that operates a bookstore next door, formed a committee late last year that hopes to spur donations towards the project estimated between $15 million to $20 million.

Miller said for a city the size of Santee, with about 55,000 residents, should have a library of about 20,000 square feet. Recently built libraries in Alpine and Imperial Beach cost about $11 million and $9 million respectively. The former has 12,700 square feet, while the IB library has 12,000 square feet.

The Santee location at 9225 Carlton Hills Boulevard has been serving the community for 32 years, although the area has had a library for 101 years. The facility has only 9,300 square feet.

Cheryl Cosart, branch librarian for Santee, said over the last two years, the storefront has been averaging about 218,000 visits, with the monthly visits averaging about 18,000.

In terms of circulation, Santee ranks ninth in the county system of 33 branches, with some 547,000 items loaned out last year.

Yes, San Diego County now operates this library, but don’t look to that agency to assume all the costs, Miller said.

After meeting with County Supervisor Dianne Jacob on the issue, Miller said the likely solution would entail the county providing the land (it’s the biggest property owner in the city) and paying for the staffing and equipment, but not for the library’s construction costs.

The county said that it strives to work with incorporated cities such as Santee as partners, asking a city to assume the costs for the building while it provides all the books, equipment and the staffing for the facilities, Cosart said.

Government grants that were available for new libraries in the recent past, but those funds have apparently been exhausted, Miller said. “I don’t think we can count on any grant money early on,” she said.

That means to get a new library, it’s going to take donations, lots of smaller ones by residents, and hopefully, larger donations from wealthier individuals, the corporate sector, and the local business community.

The Build a New Library Committee formed in October has established a Go Fund Me account, a Facebook page, and created brochures and cards to get the word out about the project.

“So far, we have $103,000 in the account, which is mainly from book sales at our bookstore,” Miller said. A few snazzy looking donor boxes were built to collect donations at the bookstore and current library.

Building a local donor base is imperative if the new fund is going to attract larger contributors, she said. “The foundation for this effort is the people in this community and then taking steps from there.”

Once a sizable base of local contributions is gathered, that will encourage larger donors and the private sector to get involved, Miller said.

Cosart said the impact of a library is hard to measure but its value is undeniable.

“We’re no longer just a depository for books,” she said. “We’re more of a community center around which people build connections both with other groups and other people.”

“Our message is that libraries build communities. They are centers of learning and entertainment as well as providing a needed community space,” Cosart said. “And we’re the only cool zone in Santee.”

The latter benefits those residents who don’t have air conditioning in their homes during the usually unbearable summer months, and come to the library to get some relief, Cosart explained.

This isn’t the first time the Friends and library supporters tried to build a new library here. About 12 years ago, a campaign was launched and seemed to attract support from the local city council, but then, it went nowhere, Cosart said.

This time around, there have been discussions with local council members about combining a library with a new Sheriff’s station, fire station and city hall. Whatever the design, this is a service that deserves a higher priority, given how Santee’s population has gotten so much younger in recent years, Miller said.

“Having raised my kids here, I know there’s not a whole lot for kids to do in Santee,” she said, referring to teens. The local library is also hosting several programs geared to toddlers and preschoolers that are attracting higher numbers of young mothers, Miller said.

The effort that is now underway could take longer than Miller wanted to guess. “Do I think this is going to happen in three years? The answer is no….Going the route of attracting donors will take longer, and may be harder, but by the time we’re done, we’ll have earned our new community library.”