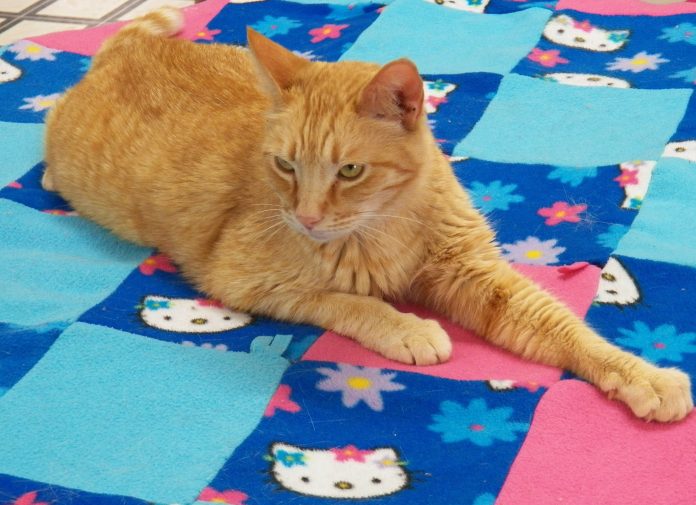 They say you can’t buy love…but you can adopt it! At least, that is what Friends of Cats, Inc. believes, so much so that they have made it their official motto.

They say you can’t buy love…but you can adopt it! At least, that is what Friends of Cats, Inc. believes, so much so that they have made it their official motto.

Hogan was a lead host at the nonprofit organization’s sixth annual spring fundraising event, dubbed Cinco de Meow. The fiesta benefiting homeless cats was held this year on Saturday, May 5, at the group’s El Cajon cat-care facility along Olde Highway 80.

Friends of Cats is a private, nonprofit organization dedicated to the care and well-being of homeless felines. The purposes of the event centered on raising money and awareness to support the group’s efforts and pairing humans with cats for adoption.

The gathering further showed off recent renovations, including an added laundry area and a remodeled hospital kitchen with stainless steel counters and sink, where special-diet foods can be prepared for ill and recovering felines. According to Hogan, the new kitchen cost more than $11,000, and plans are to continue remodel other aging areas among the facilities in stages.

“We are slowly catching up,” Hogan said. “And we are always looking for volunteers and donations. We say we are ‘no kill,’ and we mean it.”

Theirs is indeed a true “no-kill” facility, with cats euthanized only for compassion to prevent suffering if they are fatally ill. The El Cajon complex currently houses about 224 cats and kittens in a central treatment and adoption center building surrounded by four adjacent cottages, with 24-hours-a-day on-premises staff monitors. Sixty of the shelter’s feline residents were adoptable during the fiesta. About a dozen kittens being sheltered with their mother cats will be available for adoption when they are 10 weeks old.

A pressing need at the shelter is for volunteers to become foster parents for kittens. The organization further needs donations of laundry detergent and volunteers willing to launder cat blankets and bedding in the facility’s four washers and four dryers.

The group receives no government funding and, besides the income from fundraising events like Cinco de Meow, is reliant on donations and membership and adoption fees to maintain the shelter. Friends of Cats has 11 paid staffers and around 200 volunteers.

At intake, cats accepted into the care facility are quarantined until their health status is determined. One cottage on the grounds, called the Annex, is reserved for cats diagnosed with transmissible, potentially fatal diseases, such as feline leukemia and feline “AIDS.” Friends of Cats is seeking families willing to provide loving foster homes for these ailing, special-needs cats.

The group traces its origins to the 1927 formation of the Animal Rescue League, several San Diegans who bought animals in danger of being put down at the local pound, in order to shelter them until they could be placed as pets in good homes. The associated cat shelter was initially located in Pacific Beach, reorganized as the Maude Erwin Foundation for Cats (named for the cat-fancier founder) and moved to Chula Vista for a decade at mid-century. The shelter was relocated to its current site in eastern El Cajon in 1966, and then in 1968 was renamed Friends of Cats, Inc.

Adoption fees range from $100 for kittens, $75 for adult cats a year and older, and $35 for senior cats more than 10 years old. All cats for adoption have been spayed or neutered and microchipped for identification. And adopters must agree to keep the new feline family member living indoors and never declawed.

More information, including the hyperlink to live kittykam video feed, is also available at www.friendsofcats.org.

Love blossoms on day set aside for small businesses