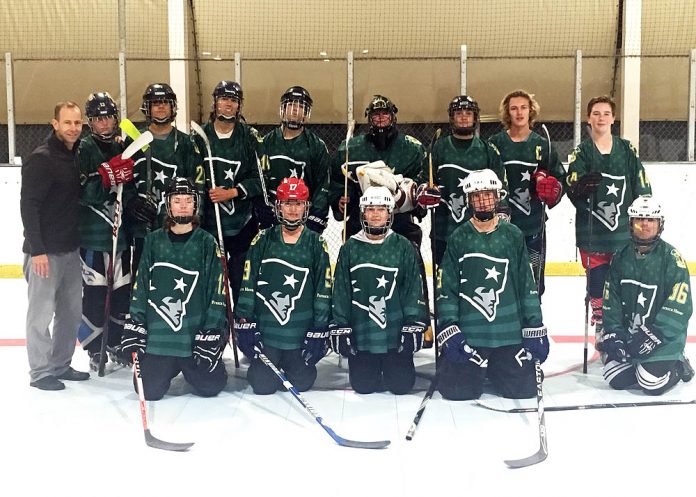 Patrick Henry High School’s first-year roller hockey team was just a dream in early September but on Nov. 30, that dream became a reality as the Patriots skated in their first CIF-Metro Conference game against the defending Kiwanis Cup champion Westview Wolverines.

The Wolverines won 13-1 but head coach Chuck Russell felt his team had still earned a victory in its own right.

Patrick Henry High School’s first-year roller hockey team was just a dream in early September but on Nov. 30, that dream became a reality as the Patriots skated in their first CIF-Metro Conference game against the defending Kiwanis Cup champion Westview Wolverines.

The Wolverines won 13-1 but head coach Chuck Russell felt his team had still earned a victory in its own right.

“It is amazing how strong the hockey community in San Diego is,” Russell explained. “Through the generosity and hard work of a committed group of students and adults, we have been able to go from two hockey players setting out a table on club day at their high school to starting a varsity program.”

The Patriots began as an idea at a dinner table conversation between Patrick Henry student Matt Russell and his father two years ago. The idea was further supported by his younger sister Jennifer, who signed on as the club’s treasurer and the elder Russell, who was later recruited as head coach.

The idea of fielding a club roller hockey team at the Del Cerro school wasn’t as far-fetched as some might have guessed. The fledgling club drew interest from 25 students, most of whom had never played roller hockey before.

But the lack of playing experience didn’t dim enthusiasm for the venture. In fact, there was more good news on the horizon. The Patriots received a boost when the Metro Conference granted them admission – and official CIF playing status — on Nov. 3 for the 2016-17 season.

It was suddenly time to roll.

The team’s roster would eventually take shape with 13 players – eight of whom had never touched a roller hockey puck before.

Brush-ups on skating took place at the nearby Skate San Diego rink in El Cajon courtesy of rink owner Joe Noris. Equipment donations were secured through friends and contacts of the elder Russell.

However, this isn’t to say the Patriots haven’t encountered their share of challenges.

“Since we are a first-year program, we do not have any returning players,” the Patrick Henry coach explained.

The Patriots rolled onto the court with five players who did have some type of hockey experience, however.

Both Matt and Jennifer Russell had played ice hockey since they were 3. Both have recent or current experience with the Anaheim Ducks High School Hockey League. Matt plays for the Poway Hawks while Jennifer plays for the San Diego Union Hawks junior varsity team in the expansive league that embraces teams as far away as Orange County and the Los Angeles area.

Elswick is a junior while Matt Russell is a sophomore and Lara, Jennry Russell and Daniels are all freshmen.

Matt Russell, assisted by Clinton Allen, scored the Patriots’ inaugural varsity goal with about three minutes remaining in the team’s season opener against the Wolverines.

“The kids had a blast,” the elder Russell said. “We only had two players who had ever played in a roller hockey game before. When we finally scored, everyone went wild. It's great to be a part of this league and we are looking improve on our first performance.”

With 12 underclassmen on the team, that should not be a problem. There is obvious room to grow.

All of Patrick Henry’s 18 regular season games are scheduled against teams in the seven-team North County League that is traditionally considered the strongest league in the 16-team conference. Games are split between the Escondido Sports Center and Skate San Diego.

The Patriots coach said the team’s focus will not be on wins and losses during the first season.

“Our expectations are focused on growth,” he explained. “Each week we plan to build on the successes of the previous week. Like any team in its inaugural season, we may struggle at first but our plan is to carve out a few victories as we hit the mid-point of the season. By the end of the season, we expect to be seen as a solid addition to the North County League.”

The Patrick Henry coach also hopes his team’s genesis is an inspiration to students at other schools who wish to start up a club roller hockey team.