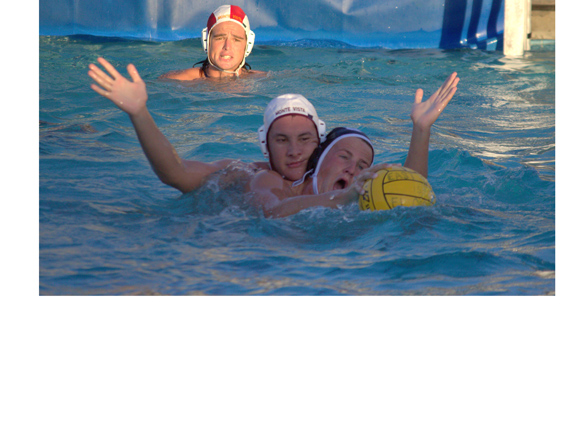 Boys’ water polo season is mid-current and the competition is choppy. In a non-conference game between Lakeside’s El Capitan Vaqueros and Spring Valley’s Monte Vista Monarchs, the clock made all the difference.

Boys’ water polo season is mid-current and the competition is choppy. In a non-conference game between Lakeside’s El Capitan Vaqueros and Spring Valley’s Monte Vista Monarchs, the clock made all the difference.

At the start of the fourth quarter, the steady volley of goals at El Capitan’s home pool climaxed in a 5-4 lead for Monte Vista. In the final eight minutes of the game, the lead was tossed back and forth as the score climbed to a gripping 8-7 victory for the Monarchs in the final seconds of the game.

El Capitan called a time-out with five seconds left on the clock but it was not enough to float on. Vaqueros attackers made one final attempt to score, but when the whistle blew Monte Vista swam away with their first win in league play this season.

“We’ve been kind of apart and playing as individuals but today was a good example of team play,” said Damon Newman, Monte Vista head coach. “We didn’t have subs today so we had guys playing all game long. When you have that kind of atmosphere and no subs, being a team is the only thing that’s going to get you through a tough game.”

Monte Vista graduated a lot of its veterans last season, which has been affecting the team, according to Monarch senior Jared Otjens. But, coming in at 1-3-0 in league play and 3-6-0 for the season, the Monarchs of the Grossmont Hills Conference are actually moving up in the world. Last year Monte Vista played alongside El Capitan in the Grossmont Valley Conference but this year they dove into the deep end with the switch to a more prestigious conference, and according to Otjens, the team’s tenacious goalkeeper, and the void of seasoned players has only been good for them.

“We’re getting better as a team,” he said. “We lost a lot of seniors last year so the leadership position has been completely re-assigned. I think we’re getting in step and all the pieces are coming together.”

Newman also does not seemed phased by the green on the bench.

“This year we’re just trying to find our identity,” he said. “And hopefully something will happen at the end of this season.”

“We did not play up to our potential and the other team played to theirs,” he said when the scoreboard went blank and the ripples in the pool began to settle.

The Vaqueros, 4-4 for the season, were disappointed to lose their first league game, but Sanchez said the season is young.

“It’s just a matter of a couple people making a couple key mistakes,” he said of the game. “It’s early in the season so we have the ability to change if everybody is willing to put their heads down and work hard.”

Vaquero senior Tristan Duncan said he was optimistic about El Capitan’s strengths, though not enough to help them pull through the win against Monte Vista, may prove to be what the Vaqueros need to get to playoffs.

“Conditioning,” he said with resolution. “We can keep up with every single team. I think we still have a shot.”

Endurance and teamwork could be the difference between a league title and the still pool surface come November.