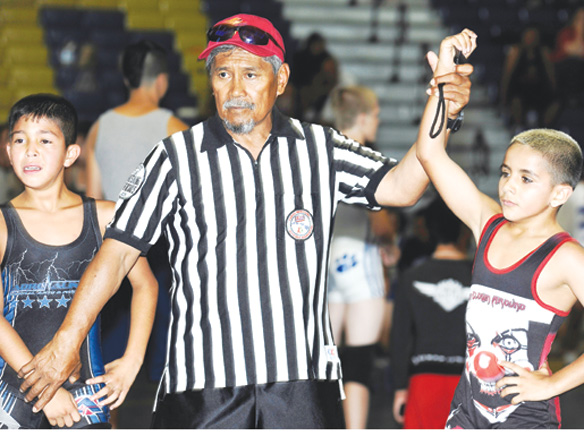 It was a large turnout to celebrate the State Games’ 25th anniversary, and a special ending for Scott Ullsperger and his son Jonas.

It was a large turnout to celebrate the State Games’ 25th anniversary, and a special ending for Scott Ullsperger and his son Jonas.

Ullsperger coaches wrestling at Mater Dei Catholic High School, the tournament host site. He coached his son, an incoming freshman at MDCHS, to a gold medal at this year’s State Games tournament.

“I love the sport and will usually stick around and watch the finals of any tournament I’m attending,” Scott Ullsperger said.

This time, the wait was paved with gold.

It was nearly 20 years before Ullsperger would reconnect with the sport when he was hired to coach the wrestling team at MDCHS.

The Crusaders took the mat for the 2007-08 winter sports season at the school’s new Chula Vista campus. Tagging along with his father at wrestling meets since then has been Jonas, himself a youth wrestler.

It was Jonas’ turn to shine at the 2013 State Games after winning his 108/118-pound Schoolboy Division weight class. The gold medal-winning performance obviously cemented a special bond between father and son.

Jonas won all three of his matches in a bracket comprised of six middle school wrestlers. He pinned his first opponent from Oceanside, then recorded an 11-4 minor decision against Luciano Parra from the Imperial Beach Predators and capped his first-place showing with a 6-2 win over Brendan Schaffer of Poway.

While Jonas was coached by his father at the State Games tournament, the younger Ullsperger was heavily influenced by coaches Jerry Matsumoto of the Chula Vista Badgers and Jacob Launder of the Granite Hills Eagles this past spring.

“We were hoping to have him be a CV Badger since the (Badgers) kids club was using the MDCHS room,” Scott Ullsperger said. “However, we live in El Cajon and the logistics behind getting him there were impossible to resolve. As such, he wrestled under coaches Eric Gritz and Russ Lockwood.”

Jonas has made significant progress since his first season on the mat when he failed to win a match.

“Jonas went zero for the entire season that year,” the elder Ullsperger said. “But he has never given up.”

Jonas has attended camps, clinics and competed in practices in wrestling rooms all around the county in an effort to improve. The results were admirably displayed on the mat at this year’s State Games tournament.

“He owes a lot to so many coaches who have welcomed him to their mats and have added a piece of themselves to get him to where he is now,” Jonas’ proud father said.

San Diego County wrestlers and coaches were well represented at the event, which featured separate youth and high school divisions.

The Mighty Mites finished the tournament with four medalists, including one champion and two second-place finishers.

“Congratulations to all wrestlers whose dedication to competition brought them to wrestle in the middle of summer,” the elder Ullsperger said.