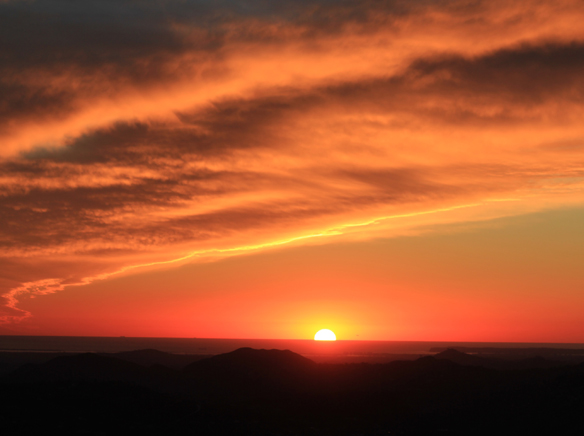 If you want to have a whole mountain mostly to yourself, with barely anybody on the trail, Viejas Mountain is the perfect choice in the East County San Diego. The trailhead is pretty hard to spot, but once you get to the wide unmarked parking place opening on the dirt road, look straight up to the right toward the mountain through the overgrown bushes and there it is.

If you want to have a whole mountain mostly to yourself, with barely anybody on the trail, Viejas Mountain is the perfect choice in the East County San Diego. The trailhead is pretty hard to spot, but once you get to the wide unmarked parking place opening on the dirt road, look straight up to the right toward the mountain through the overgrown bushes and there it is. At about 45 minutes drive Interstate 8 from downtown San Diego, Viejas peak could be seen from far away as an amalgamated strange shape of a broken triangle, but nonetheless beautiful, competing with Cuyamaca and El Cajon mountains for attention. Viejas Mountain is a sacred place for the Kumeyaay who used to come here in a pilgrimage at sunrise to perform rituals during winter solstice.

The hike is about three to four miles round trip, depending on how far you want to go. If you make it up the slippery, very rocky and pretty steep trail, you can either decide you had enough for one day and stop at the southern summit where the American flag is or go to the left and up another 80 feet of vertical gain to the very top where you are going to find a surprising construction – a wind shelter made of piled rocks in the shape of a horseshoe. Cheer yourself up, you just made it at 4,187 ft. above sea level and are now looking at what it was supposed to be an old Native Indian site. The legend says this was a Kumeyaay construction to mark the winter solstice, but the place was damaged in the 70’s and replaced with a rock wall to protect from the wind.

Speaking of the wind, it can get pretty strong here especially during the Santa Ana and there is not much forest left for protection, as the Cedar fire in 2003 left the area depleted. Now it’s overgrown with Manzanita, Chaparral, Yucca palms, Chamise and Ceanothus. At about two-thirds up the trail, the slope starts having mercy on the brave hikers and turns gentle, but not for very long. Brace yourself for the last part, which is straight up and gruesome. If you start early in the morning, then you have more chances to skip the heat and the direct sun, which is on the other side of the mountain during this part of the day. Do not attempt this during hot summer days and bring at least a gallon of water, you will need it. And snacks. And the camera.

After doing the victory dance at the top and taking selfies with the American flag, look around and during clear days you can see the Coronado Islands and all the way to the ocean. Take an inventory of all of the mountains you can spot and start with the majestic Cuyamaca Mt which is the second tallest in the county, then admire the outstanding El Cajon, see if you can guess which one is Palomar and which one San Jacinto all the way toward Palm Springs, and then say hello to the southern border with Mexico and spot Rosarito plateau in Baja. If you can. If not, remember there is at least one satellite orbiting the planet with ready-made pictures.

Dogs are allowed on Viejas Mountain. However, keep in mind the fact that the trail is mainly a washout and literally covered in rocks of all sizes, shapes and all degrees of sharpness. Sturdy hiking boots strongly recommended.

I didn’t make it to see the sunrise yet, but I witnessed one of the most breathtaking sunsets ever, with the whole sky enveloped in wings of fire and liquid gold and filigreed in purples and pinks and amber rolling over the world in a surreal embrace.

On my way up, I met the man who built this trail with his wife, several decades ago, by clearing up the vegetation and removing boulders by hand. Jack is now almost 70 years old and goes up to the summit every chance he gets, which he claims is several times a week. If he can do it, you can do it too! 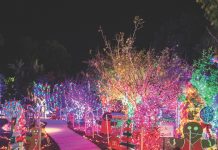 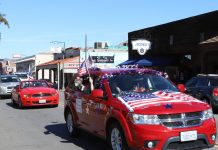