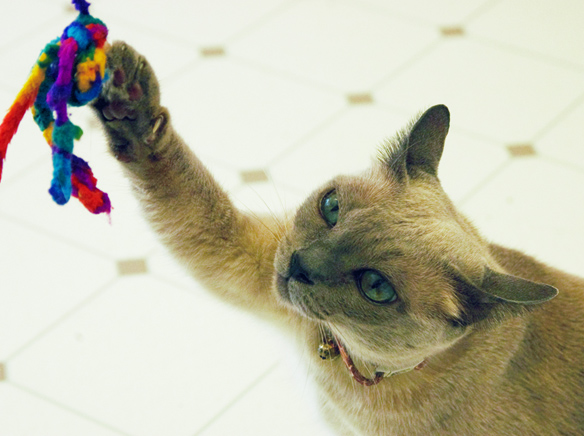 Last August marked the end to Nefertiti’s litany of health issues, which ran the gamut from asthma to sinus ailments to kidney failure–and in death, the 14-year-old took a big chunk of her caretakers’ hearts with her. Nef, a homeless Tonkinese kitten turned board-appointed mascot at El Cajon’s Friends of Cats animal shelter and placement service, rose above her illnesses from her first day at the facility in 2000. Notably, her natural friendliness led to her many public appearances on the venue’s behalf, and she had make serious short work of anything unfortunate enough to include strings in its design.

The rest of the facility’s 260 residents have it better than most. In the first place, Friends of Cats is a no-kill site, its paid staff resorting to euthanasia only as a final remedy for an animal’s discomfort. A $20,000 interior facelift, completed last September, has made life easier at the three-quarter-acre campus on Olde Highway 80, and refurbishments of the hospital and outbuildings are on the horizon. The nonprofit group operates on a $400,000 annual budget. Two veterinary technicians see to business as usual, with the neutering and more difficult cases referred to Steele Canyon Veterinary Clinic in Jamul.

County animal control officials estimate that hundreds of cats were spayed and neutered there during 2012. But cats can reproduce at an alarming rate, and the babies’ fates can make Friends of Cats’ comfortable confines seem a world away at first. Officials estimate that San Diego County is home to 1 million feral cats–about one animal for every three county residents–and the damage they inflict on public and private property may reach into the tens of thousands of dollars. Friends of Cats holds itself out as a diamond in all that rough, providing everything from extended care to the most efficient long-term solution to pet overpopulation.

Friends of Cats President Terry Hogan, who owns four cats, said the group found homes for about 20 kittens last month, typical for a Christmas spike and the hopeful little girls who fuel it (adoption season, he said, is at its height in late spring and early summer). He said that the other potential adoptees include three blind animals and a few Hurricane Katrina survivors, adding, “we only have about 150 adoptable at any given time. The rest are lifetime care, or since we’re no-kill, once they’re in the shelter, that’s it. They’re there, like Nefertiti. If they’ve got feline leukemia, feline AIDS, if they’re shy, feral, old, whatever, we have a facility for each one of the class of cats.”

Still, that doesn’t do much for the 1 million in the wild. Feral or not, cats can produce litters of as many as 12 at a time and can become mothers at six months; the result affects calls to county spay and neuter programs, which Hogan said were strained locally amid the Great Recession. Hogan said that stealth might affect the actual count as well.

“If you’re dealing with a real feral cat, nine times out of 10, you’re not gonna see it,” he said.

In any case, Hogan maintained, many factors mitigate the 1 million figures. Cats, he said, live only an average four years in the wild, while the domesticated animal lives three times that long and in rare instances reaches 30 years of age. Hogan is quick to add that entire litters are exterminated in as little as two weeks amid predation by the county’s sizable coyote community–“nature’s way,” he said, “of controlling the populations.”

“This is a very enlightened pet community. The Feral Cat Coalition does a lot of spaying and neutering—The Helen Woodward Animal Center, the San Diego County Humane Society, the county’s Animal Control Department; the Spay Neuter Action Project, many of the county’s shelters. They know about us, and we know about them. They talk to us, and we talk to them. And we have more volunteers from South County than ever before,” said Hogan. “I’ve been to the East Coast, and except for one really great shelter in Virginia, the places are horrible. It’s an extermination mentality about cats there. And I used to live in Hawaii. It’s bad there too, because there are no natural predators. It all comes down to spaying and neutering education, education, education, and this area’s shelters are doing a marvelous job.”

Indeed, the spay and neuter mantra is at least as old as Friends of Cats, which celebrates its 85th year in 2014. The group is a major player in that spirit as manmade and natural safeguards ensure a better quality of life for East County’s animals and the men and women who protect them.

For more information, including referrals on spaying and neutering, see friendsofcats.org or call 619-561-0361.

Low-impact cardio workouts to keep in shape and keep your heart...