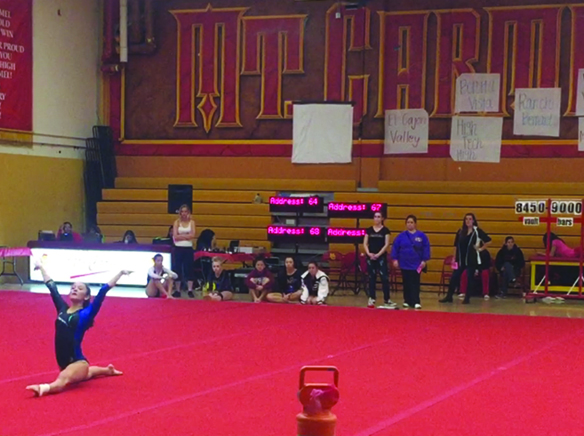 A year ago, El Cajon Valley High gymnast Karina Pulido had others things on her mind.

“I also play soccer—I am a left-side midfielder—so I was working to hopefully earn a scholarship to play soccer in college,” said Pulido.

A year ago, El Cajon Valley High gymnast Karina Pulido had others things on her mind.

“I also play soccer—I am a left-side midfielder—so I was working to hopefully earn a scholarship to play soccer in college,” said Pulido.

It is always interesting to note when the life of a high school student makes a sudden turnaround. Although Pulido maintains her soccer dream, she also became the first gymnast in ECVHS history to capture a CIF San Diego Section overall championship.

At the section finals held at Mt. Carmel High in Rancho Penasquitos on May 22, Pulido topped the field on two of four apparatuses to gain the compulsory all-around crown with a score of 38.800 points.

“I still can’t believe I really won,” Pulido said two weeks after winning. “It realty hasn’t sunk in yet.”

Pulido’s run included individual titles in floor exercise (9.800 points) and vault (9.675). And with her classroom work steadily on the upswing (a 3.80 grade-point average last semester), the future is bright when she enters her senior year in 2015-16.

“I was just doing so-so in school and in sports,” she said. “But that changed with my coaches.”

Pulido said the work of Braves head coach Mavi Richmond, who concurrently coaches the gymnastics team at district rival Monte Vista, plus assistant coach Marty Cortez for her improvement on the mat and in the classroom.

Only one other Braves gymnast has ever reached the4 top of the CIF gymnastics podium. Thirty years ago, ECVHS freshman Alicia Santana captured an individual event title by taking the optional floor exercise competition.

Three year later in a famous incident during her senior year, Santana was undefeated entering the 1988 CIFs, but after taking the floor event, she suffered a concussion during the vault. Santana High’s Eileen Maul instead took the all-around to help the Sultans to the team crown.

In the compulsory all-around, Marissa Miller of West Hills was second in the all-around (38.575) after gaining a par of second-place finishes in the vault and uneven parallel bars.

In optionals, Cahleay Scruggs from Santana was the floor exercise champion at 9.375, finishing fourth in the all-around (36.100). Melissa Palmer was eighth overall after placing third in vault.

The all-around champion was Carter Clatterbuck from the host Sundevils. The team title went to La Costa Canyon.