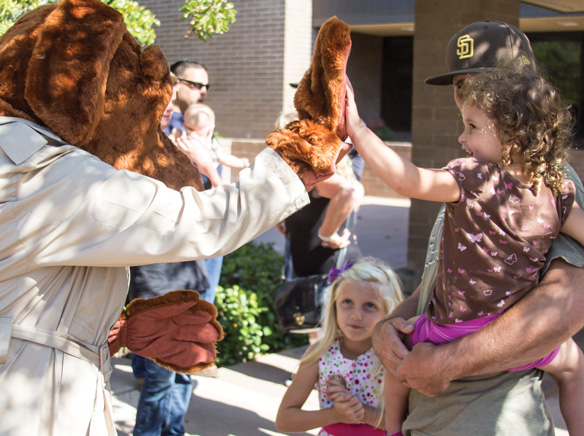 It takes a village to raise a child. In El Cajon, it takes a community to combat crime.

On Saturday, the El Cajon Police department put on a forum for residents of El Cajon at the Ronald Reagan Community Center in El Cajon to discuss the strides the department is taking to fight crime in the community.

It takes a village to raise a child. In El Cajon, it takes a community to combat crime.

On Saturday, the El Cajon Police department put on a forum for residents of El Cajon at the Ronald Reagan Community Center in El Cajon to discuss the strides the department is taking to fight crime in the community.

Members from a variety of resources including the Recreation Department of El Cajon, Neighborhood Watch, Citizen’s Patrol and Crime Free Multi-Housing spoke about a range of topics from the dangers of synthetic drugs to pedestrian safety and accident prevention.

El Cajon Police K9 unit and Special Weapons and Tactics team put on a demonstration of equipment and suspect apprehension. The event had at least one high-profile attendee, Mcgruff the crime-fighting dog.

El Cajon Police Department Captain Jeff Davis said the measures the city has taken in conjunction with the efforts of the community have made a major difference in crime in El Cajon.

“El Cajon was one of only two cities in San Diego that showed a reduction in overall Crime last year,” he said. “As much as we’d love to take credit for that, the credit goes to the community and the community-involvement with programs like these.”

Institute for Public Strategies Prevention Specialist William Perno discussed at length the issues the state of California and the city of El Cajon faces with the safety and law enforcement of sales and consumption of synthetic drugs, namely “spice” and “bath salts.”

“Spice” is an herbal mixture doused with synthetic chemicals designed to produce experiences similar to marijuana and are sold as “safe,” legal alternatives to that drug. “

Perno also said that law enforcement officials are finding it difficult combatting the use of these dangerous substances because of current laws. California Health and Safety Code 11357.5 outlaws the possession for sale of some synthetic substances, however possession of the substances for personal use remains unchecked.

“What we have right now is really a back door legalization of synthetic versions of drugs such as cocaine, meth, LSD, PCP and marijuana because possession is not illegal in the state of California,” he said.

Perno said the issue lies in the chemical makeup of the substance.

“This is just the tip of the iceberg,” he said. “It’s a difficult challenge to be able to control these drugs because they are not plant-based drugs, which are easier to control because of the plant-based products in them. These are synthetic drugs and you change one little molecule, one little formula and the name is different.”

Perno said these substances are have been turning up in gas stations and convenience stores and readily available on the Internet, vividly packaged and labeled with the intent of enticing children and young adults.

Leaders of a consortium of community involvement groups spoke to residents about the need for active participants in the law enforcement support programs in El Cajon.

“We’ve been able to give the police places and times where issues are happening in our neighborhood,” she said. “I think we make it more effective for the police department.”

Samantha Sheurn, coordinator of crime free multi-housing, a version of the neighborhood watch program designated for multi-unit complexes such as apartments and condominiums praised the efforts put forth by the groups to curb crime and vandalism in the neighborhoods. El Cajon Citizen’s Patrol activist Shirley “Texas Cat” Johnson agreed.

“Our volunteers are very dedicated people,” she said. “Every week we go, on Friday and Saturday nights, and patrol the neighborhoods of El Cajon. We are a deterrent to crime. We don’t try to be police officers we just try to be extra eyes and ears for them. If there’s something not right, we call it in.”

Community events, information about programs and ways to get involved can be found at the El Cajon Police Neighborhood Headquarters website www.elcajonneighbors.org.