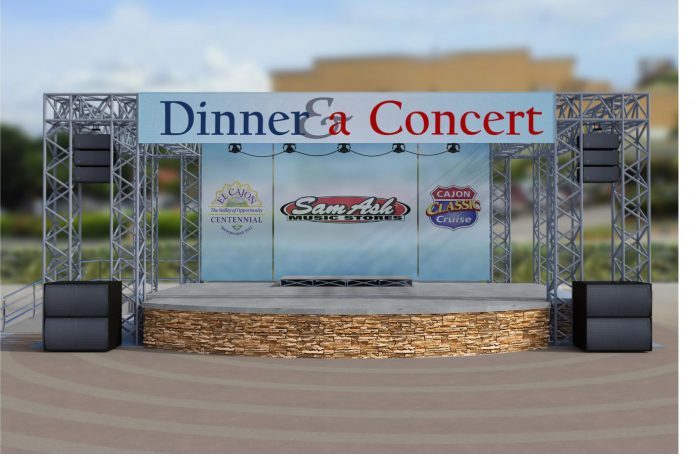 In the heart of downtown El Cajon, the Prescott Promenade takes center stage with the city’s car shows, outdoor concerts, farmers market, America on Main Street, Hauntfest, Holiday Lights on Main. It also serves as a meeting place for the community.

On Feb. 23, the El Cajon City Council voted unanimously for the Downtown El Cajon Business Partners to build a permanent stage at the Promenade. The stage will be owned and operated by the City, but Downtown Partners will absorb all the costs of building the new stage.

Downtown El Cajon Business Partners is a property based improvement district and all the people in that district voted to pay more on property taxes to fund the PBID. Downtown Partners CFO Cathy Zeman said the stage is a center for most of the activities that it helps hosts during the year, and the Partners goal is always to bring more people into the El Cajon downtown district.

City Manager Graham Mitchell said the City was approached by the Downtown Partners several months ago. The new stage will be city property, and a great asset to the city and the community.

“There is a cumbersome process in which the stage is assembled every time there is an event, and there are almost 25 events a year,” said Mitchell. “Someone is renting, assembling, taking down the stage, so the Downtown El Cajon Business Partners thought it would be a wonderful gesture to include a permanent stage.”

Mitchell said the Downtown El Cajon Business Partners has submitted building plans to the city which have been reviewed and improved.

“We are working out some final details, but we are at the point now where we thought it was appropriate to have City Council weigh in and accept this needed item,” he said.

Mitchell said the promenade is not only the heart of the city’s main events during the year, but also a common gathering place for the community.

“Many times, when something tragic happens in the Middle East many of our Middle Eastern community gathers here,” said Mitchell. “During the summer we had many protests, and the promenade was the location people gathered to express their opinions on a lot of different matters. This is the heart of many of our city events.”

Downtown El Cajon Business Partners Board President Daryl Priest said they have been planning the new stage area for a while and believes it is good for the city. He said the time-saving element of having to assemble and dismantle the stage on a weekly basis makes it worth the investment.

“We thought this would be a good community benefit for everyone,” said Priest. “We will build it correctly, put the power in, and it will not just be for us, but a community asset that everyone can use. We want to do a first-class job with something that is going to outlast all of us hopefully. When we are gone, it will still be there and still being used by citizens of El Cajon.”

Zeman said the total price of the stage is unknown right now, but the money is being used from its environmental enhancement funds.

“We are still getting bids for that and trying to utilize volunteers, services donated, and waiting for the construction insurance. After that we will have a better idea of what it is going to cost,” she said.

“When you have a stage that you have to put up every single week for a concert, pieces and parts get broken and we were spending $2,000 to $3,000 a year just replacing parts,” she said. “It is much easier for the people setting up the stage. They do not have to set up the stage. They only have to place the trusses, the lights. The people that help with this and many of our programs are from the East County Transitional Living Center.”

Priest said he hopes that the new stage will be completed by July and hopes that it can continue its Cajon Classic Cruise and Dinner and a Concert Shows.

Equestrians’ mourn the loss of one of their peers