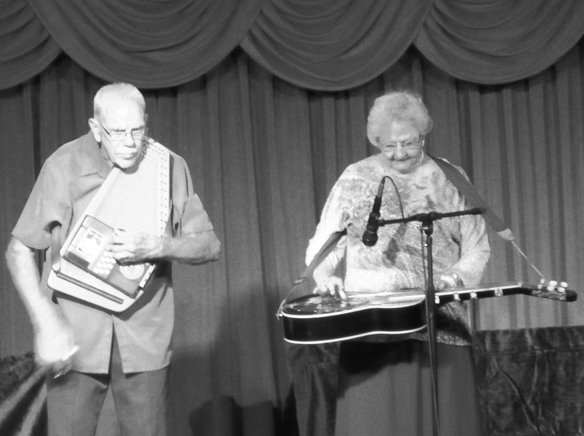 Lights! Cameras! Music! The Elks are known as a fraternal organization both for their charitable work to support children, youth and military veterans and for their friendly camaraderie ribbing fellow members.

Lights! Cameras! Music! The Elks are known as a fraternal organization both for their charitable work to support children, youth and military veterans and for their friendly camaraderie ribbing fellow members.

Who knew, though, that the local El Cajon Elks Lodge #1812 harbors many talented singers, dancers and musicians among its members? Well, the audiences who attended three weekend performances of the group’s annual charity fundraiser soon learned, if they didn’t already know, that the El Cajon Elks can put on quite a musical show.

The local Elks’ “Follies 2016” shows bore the title “Reel to Real,” taking music from movies as the basis for the artists’ interpretations on stage. From the high-energy opening number of “Viva Las Vegas,” title song of the Elvis Presley movie of the same name, attendees were on notice that the show would deliver fun and entertainment. The number featured show co-director Ron Harden doing his impression of “The King” amid a bevy of showgirls.

R.T. and Ina Denny brought country stylings and humor to the show, beginning with an autoharp and slide guitar rendition of “Lara’s Theme” from “Dr. Zhivago.” Ina took center stage soon after, to cover the Patsy Cline standard, “She’s Got You” — with the twist that at each mention of a memento from the lost love affair, Denny pulled the item out of her ball gown’s bodice. From the song’s “picture,” to “records,” “class ring,” and the “memories” of dirty socks and a pair of men’s undershorts, Ina Denny got them all off her chest. Later in the show, Ina joined R.T. as his assistant, using a pointer to highlight entries in the ancestry diagram explaining R.T.’s lyrical predicament in “I’m My Own Grandpa.”

An international flavor was brought to the show with Rosie Foss interpreting the traditional Japanese dance “Sakura Sakura,” inspired by film “The Geisha.” Laura Harden had earlier channeled Bette Midler singing “P.S. I Love You,” from “For the Boys,” as a tribute to those who served in the armed forces.  Laura Harden’s later solo number was a lovely version of “Como La Flor,” from the movie “Selena,” sung in Spanish. And Don Sauter delivered a beautiful showstopper, with his song and dance interpretation of “On the Street Where You Live,” from “My Fair Lady.”

The performances, in two acts, each running an hour, with a 15 minute intermission between, were staged in the lodge ballroom on the evenings of Friday and Saturday, February 26-27, and for a matinee on Sunday, February 28. Tickets cost $12 apiece. Proceeds were slated for charities the Elks support.

The El Cajon Elks Lodge #1812 is located at 1400 E. Washington Avenue. More information on this East County fraternal organization can be found by calling (619) 444-1812 or by exploring the group’s website at www.elcajonelks.net.