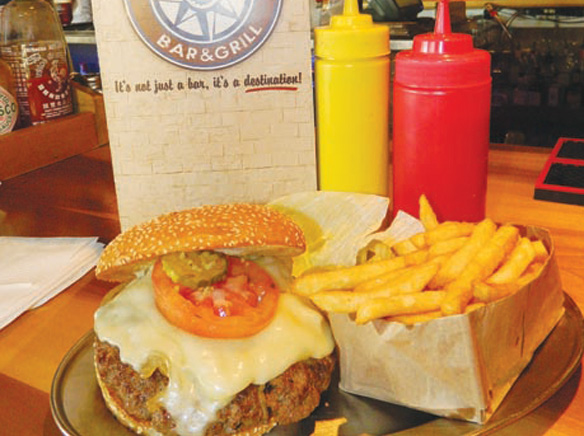 LAKESIDE — There is a brass bell that hangs by the door to the Eastbound Bar & Grill.

Satisfied customers who appreciate the food, service and adult beverages they’ve had ring the contraption as they exit.

The bell rings a lot.

That’s because Eastbound is a trendy new sports destination on the corner of Maine Avenue and Laurel in the heart of downtown Lakeside.

“Trendy” and “Lakeside” in the same sentence? The times really are a-changing, friends — for the better.

LAKESIDE — There is a brass bell that hangs by the door to the Eastbound Bar & Grill.

Satisfied customers who appreciate the food, service and adult beverages they’ve had ring the contraption as they exit.

The bell rings a lot.

That’s because Eastbound is a trendy new sports destination on the corner of Maine Avenue and Laurel in the heart of downtown Lakeside.

“Trendy” and “Lakeside” in the same sentence? The times really are a-changing, friends — for the better.

At least that’s what customers seem to think about this venue, judging by the crowds that show up for weekly special event nights.

Founded by three friends who played football at El Capitan High School, Jason Nichols, Ben Clevenger and Marco Rodriguez (along with Nichols’ wife, Ashley), the entire enterprise was deemed to be doomed from the start.

“Here we were, three young guys who knew nothing about starting or running a business, asking for credit and offering no collateral,” Martinez said.

And while it’s true that Nichols (often called the “Beast” by members of the Vaqueros) had helped with the family-owned Waterfront Bar in Little Italy, none had ever taken on an enterprise like this.

“At first, we would visit the Waterfront and soon began talking about opening something like up that near PB or Ocean Beach,” Clevenger said. “After college, we began to get more serious about it. We soon pooled our money and some investment funds and went hunting for a location.”
Armed with what they thought was a enormous amount of venture capital, the trio soon learned the harsh realities of real estate, and the high cost of retail rental property — even in a down market.

“We soon found out that our ‘enormous’ sum was nowhere near enough to get a place where we originally wanted to,” Clevenger added.
Thus, the story moves to Lakeside. And, to make a long (but interesting) story as short as possible, the trio purchase a building that had once housed a candle/antique shop, as well as a Mexican restaurant.

“The owner gave us a great deal, even though we had nothing to offer but our hopes and aspirations,” Rodriguez said. “We were able to move in, refurbish the place and open in February 2010, and we have been extremely busy ever since. It’s amazing the customer base that has accepted us into the community.”

Rodriguez’s mother even had to cosign for the initial loan. At first, she was reluctant, but in light of the venue’s tremendous success, she recently asked if there was anything else she could cosign for him.

One reason for the hubbub is the anti-bar feel of the place. It’s open, bright and airy — not like a typical tavern, which is kept as dark and secrative as possible.

The design brings a touch of Pacific Beach to the heart of East County, and that ain’t bad at all.

Another, is the friendly, attractive staff which strives to learn not just the customers’ names, but their favorite drinks and food, as well.

And that brings up the third reason for Eastbound’s success — the menu. Created mostly by Clevenger, the dishes range from large appetizers such as Chicken St. Tacos ($7.95), Jalapeno Black Bean Dip (5$5.95), the amazing Carne Asada Chipotle Cheese Fries (as decadent as it sounds for just $8.95) and, of course, the world famous Lakesliders (four mini burgers, grilled to perfection with onions, American cheese and homemade chipotle sauce and served on sweet Hawaiin roles, $8.95).

And while there is a wide variety of salads, sandwiches, breakfast and brunch items (Saturday and Sunday, 8 a.m. to 1 p.m.) and fresh, handmade speciality pizzas (from $8.95-$11.95) , the big attraction is the burgers.

Huge, half-pound montrosities big enough to sate the appetite of even this humber scribbler.

It’s no wonder Eastbound is currently competing with several other eateries in a San Diego best burger contest believe me, after you’ve had one of these dishes, though, you’ll discover there is no contest.

And I did not even mention the grand-daddy of them all: the EastPounder, which is TWO half-pound patties, bacon, American cheese, grilled onions, lettuce and tomatoes ($12.95).

Of course, all of these items come with french fries (hey, these guys aren’t Commies).

On top of all of this, the grill offers daily drink and food specials, sports viewing on multiple, large-screen televisions and Thursday night karaoke.
The next big event will take place on Saturday, March 17, a special St. Patrick’s Day blowout the likes of which has not been seen since Patty drove the snakes off the Emerald Isle. himself.

Platt College to host one night only premiere of award-winning ‘Cosplay...

‘The Heir Apparent’ promises a laugh