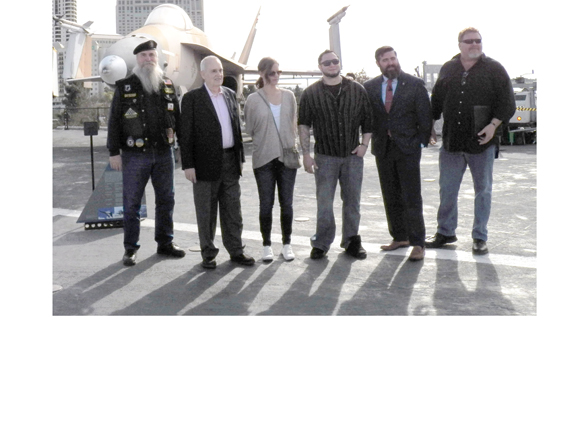 Military veterans from throughout Southern California converged on the USS Midway museum on Sunday, December 10, to host Denise Rohan of Wisconsin, first-ever woman to serve as National Commander for The American Legion. Rohan arrived in San Diego during travel around the country to visit the Legionnaires she commands for 2017-2018.

Military veterans from throughout Southern California converged on the USS Midway museum on Sunday, December 10, to host Denise Rohan of Wisconsin, first-ever woman to serve as National Commander for The American Legion. Rohan arrived in San Diego during travel around the country to visit the Legionnaires she commands for 2017-2018.

Rohan’s official event schedule in San Diego County began with a docent-led tour of the carrier museum in San Diego harbor, followed with a special presentation describing a promising new noninvasive, non-pharmaceutical treatment expected to alleviate common diagnoses for combat veterans. Known as transcranial magnetic stimulation therapy, this treatment has proven effective in relieving post-traumatic stress, traumatic brain injury, anxiety, depression and insomnia for a limited number of veterans who have undergone trial cycles of treatment. Supporting advancement of this therapy is a mission adopted for the current year by American Legion District 22, which is roughly contiguous with San Diego County.

Dr. Harold M. Koenig, Vice Admiral, USN (Retired) explained the likely dramatic impact of this therapy, “I’ve seen a lot in medicine, lots of changes. But I’ve seen nothing like the potential this has.” Koenig retired as Surgeon General of the Navy in 1998.

Ryan Garza agreed, “I call this a miracle treatment. This is the best thing that ever happened to me.” Garza served in the Marine Corps for 4.5 years, with four tours in Afghanistan. He was badly injured in late 2011, and subsequently lost his lower right leg in amputation. He also witnessed a close friend and fellow veteran commit suicide. “My life was absolutely miserable,” Garza said. He suffered anxiety attacks and could sleep at most three hours each night. Garza entered TMS therapy treatments recently, and said the effects were almost immediate. After his second day of treatment, he slept for eight straight hours. He could feel his anxiety lessening too.

Christina Sanders described similar results. Sanders was in the Marine Corps for four years, and she was injured by an improvised explosive device in Iraq’s Anbar Province during 2006. She was diagnosed with TBI and PTS. “When I returned, I was a different person. I was confused, not focused,” she explained. She began twice daily weekday TMS therapy sessions on November 14. Her sleep improved, as did her sensory perception. “I could feel and see better, see deeper colors. And I could see the results recorded in my EEG,” she continued.

Treatment is preceded by a baseline assessment EEG to determine problem areas in brain activity. Koenig offered a layman’s terms explanation of what the TMS treatment does, “When the areas of the brain are not all synchronized, not all on the same frequency, problems develop.” Koenig likened this condition to a mistuned radio, which sounds fuzzy and difficult to hear. Most of the patients treated only need a two-week course of therapy, preferably twice daily.

Chris Yates, American Legion District 22 Commander 2017-2018, explained how the local Legion decided to initiate this supportive collaboration. “What are we doing to help veterans? And what can we do?” he asked. In a brief interview after the TMS presentation, Yates elaborated, “At our December District 22 general meeting, we decided to adopt this as our Veterans Affairs and Rehabilitation program for the year. We had the opportunity to share the experiences of veterans who have had this therapy. And we’ve taken on a three-part mission to support TMS treatment. Our mission is to connect veterans in need with this therapy. The first part is raising awareness of the therapy among veterans. The second part is fundraising to pay for veterans’ treatment. More important than anything is to develop a resolution and move this within The American Legion to do whatever it takes to make this widely available, whether encouraging legislation to be enacted or urging FDA approval so that DOD and the VA will provide this treatment free of charge to veterans, and insurance companies will pay for treatments. That’s our mission.”

Yates was referring obliquely to the fact that TMS has received FDA approval as a treatment for depression and for migraines but not yet for other military-service connected conditions. Another related aspect of the local American Legion mission is to connect veterans with an upcoming series of clinical trials to be sponsored by UCSD investigating the effectiveness of TMS for those other conditions. The particular treatment is also more formally called personalized repetitive transcranial magnetic stimulation. Treatments are locally available through MindSet clinic services, located at 16918 Dove Canyon Road. More information can be found at www.mindset-hq.com.

After an eight year search, a daughter reunites with father