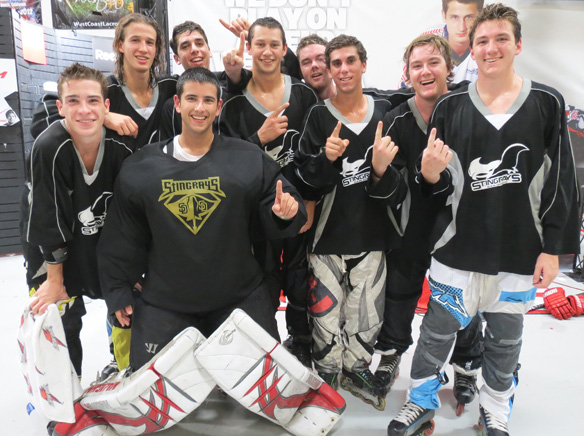 A whopping 380 teams competed at this summer’s Amateur Athletic Union/USA Roller Sports Junior Olympic inline hockey championships in Orange County and one East County skater, in particular, made his presence felt on the playing surface.

A whopping 380 teams competed at this summer’s Amateur Athletic Union/USA Roller Sports Junior Olympic inline hockey championships in Orange County and one East County skater, in particular, made his presence felt on the playing surface.

Baldwin clocked 101 mph on a radar gun in the hardest shot competition and timed 13.6 seconds in the fastest skater competition. Both winning marks were among the best ever recorded in Jr. Olympic Games history.

For his winning efforts, Baldwin came away with more than $1,500 worth of gear — skates, sticks and wheels.

Baldwin, who is planning to play for Grossmont College’s inline hockey team this fall/winter, said he was “thrilled” to be able to represent the San Diego Stingrays at the AAU Junior Olympics.

“Winning the U18-AA championship and two different skill contests was the highlight of my summer and it demonstrates that the Stingrays are becoming one of top roller hockey clubs in the country,” he said.

This summer’s AAU Junior Olympic Games took place July 11-21 in Huntington Beach and Irvine. The event proved to be an international showcase, with teams from 25 countries participating.

Overall, six of the eight Stingrays teams entered in the event medaled.

Stingrays program director Kristy and Ron Smith noted the program continues to grow and this year brought three new coaches into the program.

“We are attracting high quality players in addition to introducing some travel ice hockey players to roller hockey for the first time,” Ron Smith said. “As a whole, we have outstanding goalies who have helped us to be very competitive.”

Ragnar Relay race for Monarch School to help the future of...