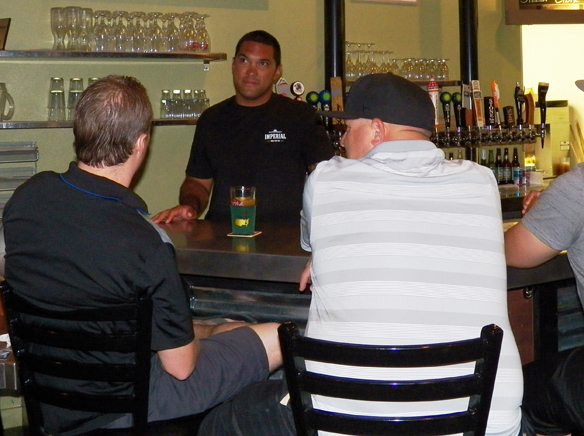 What’s a brand to do? A company can build a sound reputation as a quality business, and then watch customer tastes drift away, in changing times and competitive marketplaces.

What’s a brand to do? A company can build a sound reputation as a quality business, and then watch customer tastes drift away, in changing times and competitive marketplaces.

Boll Weevil restaurants, a 40-year staple in San Diego County’s casual dining scene, landed in that difficult spot after repeated bankruptcy filings resulted in dissolving the corporation by the end of 2008, leaving behind local franchisee-owned locations in Imperial Beach, Lemon Grove, Ramona, and on Clairemont Mesa in San Diego. In the midst of that brand-damaging turmoil, a trio of enterprising businessmen saw promise for reviving the traditional family restaurant chain in East County. Tom Walker, Victor Tongco, and Rick Hackley  partnered to purchase and reopen the Lakeside Boll Weevil, buying rights to use the name, and laying plans to expand the restaurant’s image and market footprint. Next, they added Lori Murphy as a fourth partner for the March 2013 opening of the much-reinvented Boll Weevil 53 in Santee.

A sampling of Santee’s Boll Weevil 53 brand shifting was on display at the Green Flash Tap Takeover, on May 3. Waiter and beer expert Cody Brown described the restaurant redesign as an independent conceptual model, upgrading the classic burger joint menu’s 20 available variations of half-pound Steerburgers with Tarantino meats and handmade burger patties. A gluten-free menu has been added. And about that 53? The restaurant offers 24 beers on tap and 29 bottled choices. Half the taps rotate each week, and the emphasis is on offering beers from Santee brewers such as Manzanita, BNS, and Butcher’s Brewing. Happy hour cuts prices any time San Diego’s Padres, Chargers, or Aztecs are playing. And a monthly beer-based event kicks the reinvention ahead to entirely different heights.

At Saturday’s event, bar manager-events planner Will Fox and Green Flash Brewing Company district manager Quinn Taubenheim selected a quartet of favorite tasters covering the brewery’s pours. East Village Pilsner is pleasantly refreshing, with a light toasty finish, a good choice for hot weather quaffing. The 30th Street Pale Ale is more complex, with floral and citrus flavor notes. Getting down to business is Road Warrior, an Imperial rye IPA that is clean, rich and smooth. The real challenger, though, was the notched-up Double Stout Black Ale, dubbed Serrano Chili Double Stout, for its lacing with the mildly sweet hot-spiciness of Serrano chilies, giving a bite in aroma and taste.

Lori Murphy, co-owner and manager at the Santee site, lives in Santee and says she and her partners “wanted to do something different” and also provide support to families in the community. She continues, “We serve great beer and great food.”

Will Fox, soon to be brewing for in-house taps, derives satisfaction from the remade restaurant, saying, “We have the best beer selections in the county here.”

The Lakeside Boll Weevil, in its companion reinvention, within the past month has added a Thursday night, all-you-can-eat fresh fish and chips offering, featuring hand-battered cod, lightly oiled, hot French fries, and homemade coleslaw. Unlimited, tasty fresh fish in East County at a competitive price of $9.95? The meal’s fish are locally caught, the batter and coleslaw made in-house from Victor Tongco’s grandmother’s recipes. The result is a deliciously light but substantial dinner choice.

Assistant manager Shilo Viau says, “Boll Weevils have been a traditional family restaurant, and we wanted to branch out. We added a steak sandwich to the menu, and every month we are adding something new and different.” She adds of the all-you-can-eat fish and chips night, “It has been doing really well, slowly building.”

Both sites offer local charitable groups 20 percent of proceeds from fundraising events. Boll Weevil 53 makes up “beer baskets” as a prized charity raffle item. The Santee Boll Weevil is located at 9621 Mission Gorge Road, Suite 101, contacted at (619) 334-5353. The Lakeside restaurant can be found at 9741 Winter Gardens Boulevard, reached by phone at (619) 334-1718.