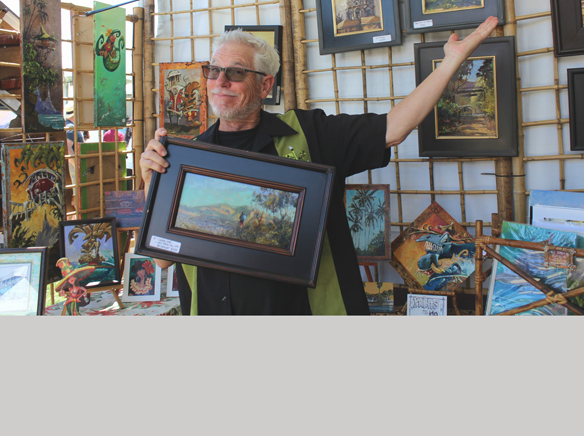 Witty lines like “Don’t ask me about soccer or the metric system” flowed from painter Norm Daniels. That wit is embedded in his art as well. Daniels was among 200 artists who participated in Artwalk -Liberty Station, which ran August 13-14, and showcased artists, musicians, businesses and food suppliers at San Diego’s Liberty Station.

Witty lines like “Don’t ask me about soccer or the metric system” flowed from painter Norm Daniels. That wit is embedded in his art as well. Daniels was among 200 artists who participated in Artwalk -Liberty Station, which ran August 13-14, and showcased artists, musicians, businesses and food suppliers at San Diego’s Liberty Station.

Daniels, 62, who grew up in La Mesa, describes himself as a “representational impressionist but not photo realistic” painter or “plein air” impressionist. He has had his work displayed in Surfer Magazine and has had his paintings in galleries in California, Hawaii, and Puerto Rico. Bird’s Surf Shed, Adelman Fine Art Boutique Gallery in Little Italy, McKibbin Studio Inc. in Laguna Beach are just a few of the galleries.

He graduated from S.D.S.U. and worked as an architect until several years ago. A Lacunar stroke, a stroke that results from occlusion of one of the penetrating arteries that provides blood to the brain’s deep structures, changed his life. He worked to regain his sensibilities and switched to only painting.

Areles Goodin, who visited his booth and has five of his paintings in her home, said, “He is very popular in the Tiki community.” Daniels will be showing his work at the upcoming Tiki Oasis 2016 this weekend at Mission Valley’s Crowne Plaza Hotel.

Fellow painter and east county resident Scott Palmer said “He taught me to paint loose and do the details after that.” Daniels and Palmer have been friends for years.

Daniels added a tag, “If I leave now I can make El Cap by sunset” to his painting of the east county landmark El Capitan. His paintings of East County are not the only marks he has left. His architectural work shows up in the houses he has designed in Poway and San Diego.

Daniels, a multi-faceted person, also participated in the 7 Day Hero project in Vietnam and went there to help in a leprosy colony. A yap strap which is designed as a simple wrist brace that allows those without fingers to gain some independence with the use of their hands allowed him to teach painting to the lepers.

But volunteer work aside Daniels’ surf art and plein art has put him on the map with others in the surf art community like Rick Griffin. Daniels cites Griffin has a major influence in his ocean art that also encompasses doing tropical art.

Daniels shows his work in 10 shows a year with Artwalk – Liberty Station being one of them as well as the upcoming US Sand Sculpting Challenge in Imperial Beach and others in Palm Springs and Southern California.

From dairy farm to pumpkin patch