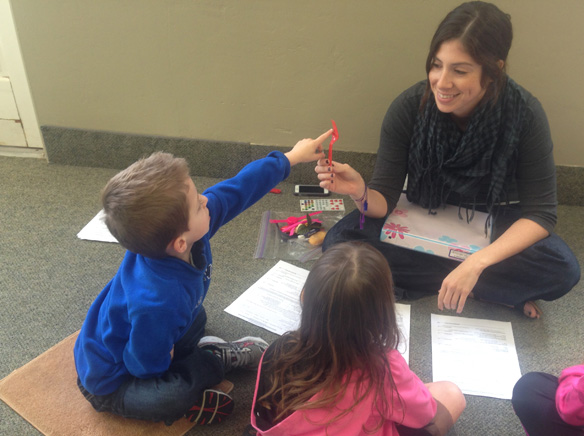 It took Todd and Dayna Hoff a year to get an autism diagnosis for their 2-year-old son. They wondered if it took them that long, how many other parents were struggling without resources. That was when they decided to help others by sharing their resources with other families to help them steer through the complex system of caring for children with Autism Spectrum Disorder. It was 2003, and the beginning of the Autism Tree Project Foundation (ATPF).

It took Todd and Dayna Hoff a year to get an autism diagnosis for their 2-year-old son. They wondered if it took them that long, how many other parents were struggling without resources. That was when they decided to help others by sharing their resources with other families to help them steer through the complex system of caring for children with Autism Spectrum Disorder. It was 2003, and the beginning of the Autism Tree Project Foundation (ATPF).

Ten years later, this grassroots effort has 14 programs that offers help and support at no cost to families throughout San Diego County and the Bay Area. Its mission is to raise money for a cure, increase community awareness and educate parents, educators and the community about the characteristics and needs of those with Autism Spectrum Disorders.

On March 1, Casino 4 A Cause (www.casino4acause.com), a fundraiser for the Autism Tree Project Foundation will be held at The Lake House at San Vicente in Lakeside. The evening of fundraising includes casino games, silent auction, prizes, gourmet hors d’oeuvres, craft beer and fine wine. Run by volunteers, ATPF provides all of its services through private donations, fundraisers and grants. It receives no governmental funding.

When ATPF began, the diagnosis of autism was one in 250. Now, with awareness and training that number is one in 50 school age children 6-17 years old.

Lisa Kaufmann, Autism Tree Project Foundation (ATPF) director of program development said that building long lasting sustainable partnerships with the community, educators and organizations like El Cajon’s AKA Head Start is essential in its core mission to get early intervention screening to all preschool children.

“On average, every year we screen 735 kids,” said Kaufmann. “Partnering with AKA Head Starts adds 1,200 children to that number every year. We would screen every child in San Diego County if we had the money. It costs $36 to screen one child.”

Kaufmann said the three-phase screening is free to parents and preschools and its focus is not necessarily on autism, but on developmental delays.

“We don’t use the word autism,” she said. “We want to screen every child the same way that they get their eyes checked or go to the doctor. Our goal is to go in, screen children and pick them up for any developmental milestones they are not reaching. It does not mean that it is autism. It could be a speech delay or something else, but it gets the child plugged into our community and its resources.”

The screening process, which is quickly becoming an international model because of its inclusive concept and early intervention success, is the work of Speech Language Pathologist Kara Dodds, ATPF Early Intervention Preschool Screenings director and Kara Dodds & Associates director.

Dodds said what is unique about this program is normally a speech pathologist will go to a school and screen about 10 percent of students. She said in working with ATPF, that she had to go back to the drawing board.

“With Phase 1, we have to train teachers and directors the red flags in communication skills,” said Dodds. “During that training, we talk about autism in how it deals with speech and language. We do not diagnose autism, but we are looking for those red flags that would warrant further evaluation.”

Often teachers and parents perceive red flags as a behavioral problem, she said. She trains educators what communication practices should look like at 18-months or 2-years-old and the difference between disorder and behavior. Dodds said with teachers and directors on board it gives her the ability to get every parent to sign a consent form, with no child singled out.

“We treat it like picture day,” she said. “This way parents are more at ease because for concerned parents it is a scary step to jump into. Are hope is to have this process published so it can be used in preschools everywhere.”

Dodds said Phase 2 screening is comprehensive. It looks at communications as a whole and with the information about autism “in the back pocket” and the knowledge of behavioral and sensory issues in children, the screening detects many issues other than autism. She said the hardest part is the follow up. Every child gets written results, a speech and language development chart and an area resource list with detailed information for parents on who to contact and what to say.

“We are shaving off a year in finding problems, and that year can really make a difference in changing lives,” said Dodds. “The relationships we have with schools, we have now had for years and it is part of their routine—and we keep adding new schools. We went from screening 10 percent of a school to screening 100 percent.”

AKA Head start services 1,174 children between the ages of 12-months to 5 years. Karen Morrissey, AKA Head Start disabilities program specialist said this partnership is unique, because her job is to connect families with services. With Dodds referrals, she can connect parents for further assessments needed.

“We are getting our mandated screenings done so we get in that legacy school, and next year they will get this screening along with our required screenings,” she said. “Now we are screening all of our children for speech and language in the first 45 days of walking in the door. It’s just amazing of all the things we are going to be able to catch in time to make a real difference. I am thrilled that I have an expert coming in telling me that a family needs a little more evaluation so we can make sure that this child gets all the services they need before they hit kindergarten. Early intervention is the key”

She said the feedback she gets from school directors and teachers is amazing. Many schools are now asking for this program wanting it a part of its routine. She said teachers are taking the education from ATPF screenings immediately into the classroom and learning to distinguish between behavioral issues and developmental flags.

“Some children will need help all their lives,” she said. “But with this program, we can change the lives of many others with early intervention.”

Kaufmann said this process is revolutionary.

“We pick up kids early, refer them for further evaluation and get them into therapy so by the time they hit kindergarten, they are not in special classes,” she said. “This is not every case, but it gives a chance to those that can be mainstreamed.”

Kaufman said once a child is screened and referred they are in the ATPF system and connecting families with the right programs is the first step.

“If you are a new family, you are like a deer in headlights,” she said. “You are trying to deal with what is going on with your child. You don’t know what autism is, where go or what support you need. If you know a child or have a child that you think might need screening or help, just call our office and we will get you plugged into one of our programs to help you somehow.”

ATPF offers parent mentor, USD football and baseball mentor, mothers and daughters, parent and child musical playgroup, advocacy, Autism FITT Club programs and more. It recently collaborated with Jet Blue, the San Diego Airport and the TSA for Blue Horizons for Autism. Kaufmann said it was a remarkable experience for many families because with many of the traits of autistic children, parents did not believe they could fly with their kids, but now they can.

Dodds said this practice flight from checking in to getting off the plane is huge steps in progress in practicing things most children with autism have trouble with.

“There are some standout things about autism,” said Dodds. “They don’t like change in routine, have sensory issues and in an airport there are so many things they have to do alone. Parents can’t go through screening with them, they have to take their shoes off, their bags are taken away and many of them do not like to be touched. If we can do this, show them what they are going to be doing it calms them down. It is another revolutionary step.”

For more information about the Autism Tree Project Foundation, its research and programs go to www.autismtreeproject.org.