The high school swim season seemingly picked up right from where it left off last March for the Granite Hills High School swim and dive team after sweeping visiting West Hills in a Grossmont Hills League dual meet last Friday.

The Eagles won the boys contest by a score of 134-49 and completed the sweep with a 118-62 victory on the girls side.

Final scores were not necessarily the focus, however.

“Being the first league meet of the season, our swimmers were happy to be competing,” GHHS girls varsity coach Cathy Elgas said. “We had some nice swims and are working hard to get better each week. We are hoping to break a few school records in the next couple weeks. The boys and girls have some quality freshman that add depth. It should be an exciting season as long as everyone stays healthy.”

The last sentence remains key to success amid the ongoing COVID-19 pandemic.

Last Friday’s contest at the Georgette Torres Aquatic Center took place under new health and safety protocols issued by the California Department of Public Health and the San Diego Section. Despite all the new rules and regulations, the meet retained a tremendous amount of atmosphere on deck.

It looked and felt like a regular high school swim meet, part of the “new normal.”

“Sports are vital for kids,” West Hills head coach James Searls underscored. “Finally having them back made it feel like they’re back in the real world. Seeing the smiles on their faces, seeing the success, it’s about time.” 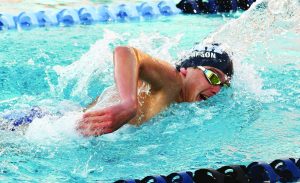 All either won individual events or were part of a winning relay team.

Kluge and Izzy Cox each won four events on the girls side of the meet while Keane, Thompson and Felio emerged from the water as four-event winners on the boys side.

Cavan Cox and Sapper both were three event winners.

Keane, Stinnett, Thompson and Felio stroked to victory in the medley relay in 1:46.04 while Cavan Cox, Stinnett, Johnson and Pennings combined to post the top time in the 4×50 freestyle relay in 1:38.32.

Thompson, Cox, Felio and Keane swam to victory in the 4×100 freestyle relay.

“We have some pretty young talent, which is exciting to watch,” Eagles boys coach Rhett Gaeir said. “Unfortunately, we don’t have the depth we have had in the past. But we feel we have the potential to win league. We’re just happy to be here.”

Both Gonzales sisters, who are actually part of a triplet delivery, have both committed to the next level. Camryn Gonzales will attend Grinnell College in Iowa while Jordyn Gonzales has selected the University of the Pacific in Stockton.

Both sisters have been swimming since they were 6.

Camryn was excited to announce her commitment to swim and study at Grinnell College.

“I look forward to continuing my academic and athletic career in a welcoming environment with supportive coaches and rigorous courses,” she posted on social media. “I can’t wait to be a part of the team.”

Searls said it took Obregon about a year to get the hang of competitive swimming.

“Late in his sophomore year he started working on his turns, once he got those down, he just took off,” the West Hills coach said.

Perry, Souttere, Garret Witt and Obregon finished second as a unit in the boys 4×50 freestyle relay in 1:41.07.

In the diving competition, 11 student-athletes competed, including nine from the host Eagles.

Granite Hills recorded the top two finishers in the girls dive card, with Isabella Kamahi placing first with 186 points ahead of Kelly Henderson with 177.10 points. West Hills’ Samantha Clifton was third with 128 points.

The Granite Hills pool was renamed last year after Torres, who was instrumental in getting the pool built, passed away from cancer.

Eagles soaring over the competition to kick off delayed football season