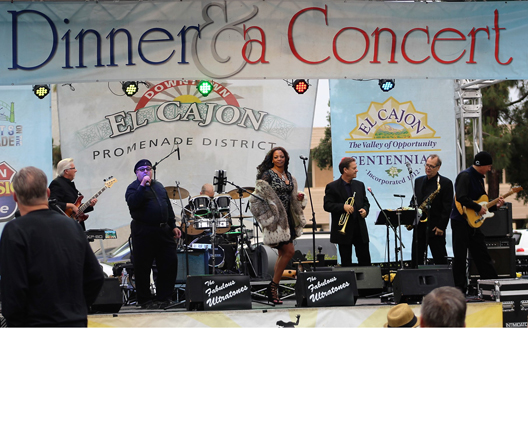 The Fabulous Ultratones kicked off the Downtown El Cajon Business Partner’s free concert series, Dinner & a Concert, on May 5 with concertgoers quickly filling up El Cajon’s Prescott Promenade with their lawn chairs.

The Fabulous Ultratones kicked off the Downtown El Cajon Business Partner’s free concert series, Dinner & a Concert, on May 5 with concertgoers quickly filling up El Cajon’s Prescott Promenade with their lawn chairs.

“We went to Humphrey’s on the off season and we had to have them” said Downtown El Cajon Business Partner’s (D.E.C.B.P.) board member Victor Zeman of The Fabulous Ultratones. The band played for their first time at Dinner & a Concert but has performed at Humphrey’s on a regular basis.

DECBP’s event coordinator, Alexis Frost said, “The concerts have been going on for 20 years. We get thousands that attend.”

DEBP board member and treasurer, Cathy Zeman, named the other new entertainers this year as Clay Colton Band, Out of the Ashes, Summer of Love, and Patrick Trampus.  Crowd favorites like Back to the Garden, with legendary guitarist Albert Lee performing with them on August 25, and other acts will perform until the end of the series on September 29.

Band leader of The Fabulous Ultratones, Bernard Sena, on his band’s flexibility “We have four different male vocalists and two different female leads.” Sena’s band does contemporary cover songs and can change from a DJ format for weddings and events to an 8-9-member band. They have been together for fifteen years. They will also be performing at the Summer Concert Series at Lake Poway.

A variety of surrounding restaurants were busy with diners but other options were also open via vendors like Lillia Sivilotti and her husband Mario Puente who offered Argentina-style empanadas and Alfajores cookies. “We are really excited to be here; this is our first time” said Puente.

Vendors like Kettle Corn, Delish Dogs, and Full Belly BBQ were other food or snack options for attendees but some brought their own picnic baskets or food filled coolers.

Alexis Frost highlighted the prizes available to concert goers among them as trips on DayTripper Tours, recliners, and other prizes. Check with the DECBP for details. Frost also highlighted the August opening of the new Courtyard Marriott – Courtyard San Diego El Cajon during her welcoming comments.

All the Dinner & a Concert series run from 6-8 p.m. on Fridays except for the yacht rock group, Laguna, which will be held on Thursday, May 18. For more information visit:  www.downtownelcajon.com.