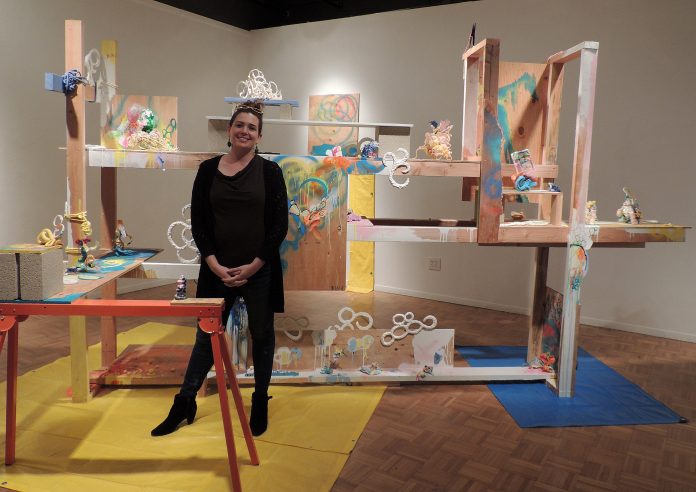 On International Women’s Day, March 8, the Hyde Gallery at Grossmont College had an opening reception for its double exhibit of “Don’t Hold Still,” an exhibit of tintypes and late 19th century photographs of women; and “Greater Than,” an exhibition of work by sculpture artist Sara Parent-Ramos.

On International Women’s Day, March 8, the Hyde Gallery at Grossmont College had an opening reception for its double exhibit of “Don’t Hold Still,” an exhibit of tintypes and late 19th century photographs of women; and “Greater Than,” an exhibition of work by sculpture artist Sara Parent-Ramos.

As soon as you walk into the Hyde Gallery, a tidy row of women’s portraits on tintype line the wall, with a detailed timeline above the photographs. The timeline, created by Gallery Director Alex DeCosta, gives dates and facts about women’s emancipation in stages, as well as the story of how women became involved in the art of photography.

The tintypes, from the private collection of Sandra Small, were co-curated by Suda House, Professor of Art and Photography, and Gwyneth Maples, Professor of Humanities.

Small had begun collecting the images when she was in college. She used to find the images for a dollar in thrift stores. Now they are harder to find and they are more expensive.

“My whole purpose for these images is to collect and save them and to have them put in a museum. The fashions, the faces are all history,” said Small.

The old-fashioned portraits show un-smiling women who were taught and told to hold still. Little by little, over the period of about 100 years, women began to take on their own identity. Much of her identity was formed when she got behind the camera, rather than in front of it.

“Photography was an accomplice to women’s liberation,” House said.

But by the 1950s, women had moved from image-makers and memory keepers to sex objects poised to help sell everything from cars to washing machines. That viewpoint is still going strong.

According to House, today is a good time for a woman to pick up the camera, record, speak up, take action, “and don’t hold still.”

In the other half of Hyde Gallery are the colorful, whimsical sculptures by Parent-Ramos, which sit on shelves and shimmy up the walls. In the center of the exhibit room is a large construction of plywood boards and a collection of amoeba-type sculptures that delights the imagination.

“I like to make little worlds in their environments,” said Parent-Ramos, whose parents are both biologists.

“We were always looking at things under the microscope. So a lot of my work comes down to looking at microscopic parts which I put together, and maybe break down again,” she said.

A degree in psychology furthered Parent-Ramos’s interest in the study of networks. After schooling in psychology, she studied ceramics. As a result of her combined studies, she considered more wholly the idea of collaborative work.

“I am always looking at communities and networks and study how they work together,” she said. “The title I gave to this exhibit, “Greater Than,” comes from the idea that the sum of its parts is greater than the whole.”

Parent-Ramos’s affinity for shapes and forms resembling bacteria shows up in bright and curious integrations of colorful shapes. Think cells, bacteria, protozoa and you get a picture of Parent-Ramos’s world.

“Simple forms can be profound,” she said.

The two exhibits will be available for viewing through April 3. Hyde Gallery hours are Monday-Thursday 10 a.m. to 6 p.m., except for Spring Recess in the week of March 26. For more information, call 619-644-7299 or go to www.hydeartgallery.com.