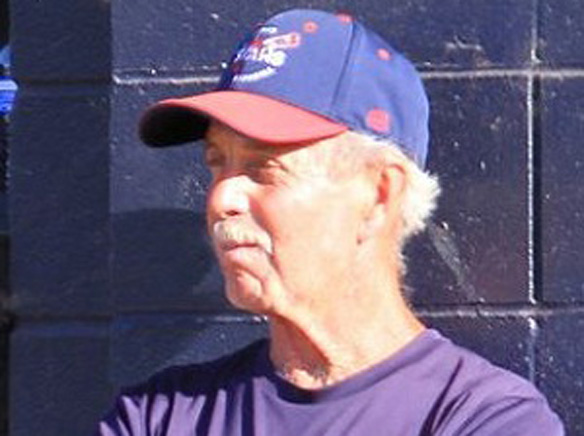 Semipro baseball rarely is a front-page item of interest, yet it’s been an important backbone for players to continue the dream to reach “the Show” and become a part of Major League Baseball.

One of the people facilitating such wishes is Santee resident Mickey Deutschman, the owner and field manager of the San Diego Stars semipro baseball team, which operates on a private ballpark located on the Barona Indian Reservation.

Semipro baseball rarely is a front-page item of interest, yet it’s been an important backbone for players to continue the dream to reach “the Show” and become a part of Major League Baseball.

One of the people facilitating such wishes is Santee resident Mickey Deutschman, the owner and field manager of the San Diego Stars semipro baseball team, which operates on a private ballpark located on the Barona Indian Reservation.

“It’s all about the game,” said Deutschman, who has advanced two-dozen of his players into MLB uniforms. “I’m just along for the ride, which has been a great one for me.”

Finding success right from the beginning—his 1984 ball club, then tabbed the Santee Stars placed fifth at the National Baseball Congress World Series—Deutschman achieved a major milestone with his 1,000th career victory in an NBC contest this past August.

With more than 30 years operating the Stars, which include countless NBC regional championships and national events appearances, Deutschman will receive his own notoriety as the newest member of the National Semipro Baseball Hall of Fame and Museum.

“All across the country, you only find a guy like Mickey once every 500 miles,” said Tim Turbin, curator of the museum, which opens its door in Evansville, Ind., in November. “The Hall began online 12 years ago, but we will open an all-brick facility over Thanksgiving weekend 2014. And Mickey is definitely a deserving member.”

Turbin know all about semipro ball, too, watching five members of his Evansville Outlaws reach the majors from 1992-95. Turbin’s staff has inducted some five dozen players and contributors to semipro baseball over the last decade, but now all will have a centralize location, similar to the more well-known National Baseball Hall of Fame and Museum in Cooperstown, N.Y.

When the Semipro Hall opens, Deutschman will find his name and likeness engraved on a shining square-foot piece of black marble and placed along side with the other inductees.

Official statistics are hard to obtain, yet his career mark of 1,003-553 could make “Mickey D.” one of the country’s winningest skippers.

“There was a time when there was no place to play except semipro ball if you couldn’t get signed with ‘organized’ or affiliated ball,” Deutschman mentioned about signing a pro contract with a minor league professional organization. “There were even very few adult leagues.”

“Now there are all sorts of options, so semipro ball has been slowly disappearing, getting replaced by collegiate teams (for amateurs) or independent leagues (for players out of college eligibility).”

Santana High coach Marty Nellis and Pete Jernigan founded the Stars in 1981. Three years later, Deutschman asked to become involved and within a year took control of the operation. The Stars moved to Barona in 1995, but are called the San Diego Stars when traveling.

“We beat Taiwan in a tournament in Palm Springs, and we once defeated Tea USA in Wichita at the NBC World Series in 1998,” recalled Deutschman, who has played against national a half-dozen other national teams (including Cuba when they were the world’s top-ranked team), including victories over Canada and Australia.

“We played a ton of ballplayers on their way up, ballplayers that had been released, and an awful lot of guys going all the way that used to play in the pros.”

“We had some really talented guys who played for the love of the game. It’s been a pleasure and a joy. Life-long personal relationships have been developed with the Stars, and I continue to hear from people who haven’t played for 10 or 15 years — it’s a fraternity.”

“I came out here from Illinois, where there was a lot of semipro ball, so when I first saw the Stars play, I recognized what it was and wanted to get involved. I’ve enjoyed the ride.”

Deutschman supports the Stars himself from proceeds from Air Santee and Temperature Control, his locally owned and operated heating and air conditioning companies.