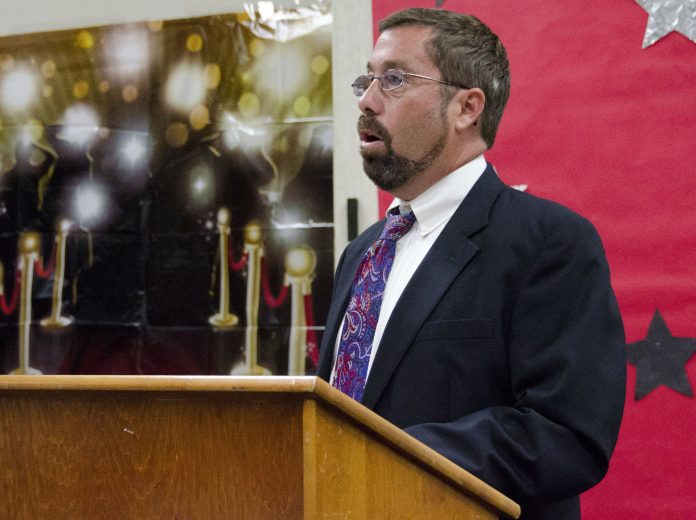 The June 13 meeting drew teachers, parents, administrators and board members from both Alpine Unified School District (AUSD) and the HCRS to discuss the legality and consequences of the charter’s location in Alpine.

The June 13 meeting drew teachers, parents, administrators and board members from both Alpine Unified School District (AUSD) and the HCRS to discuss the legality and consequences of the charter’s location in Alpine.

AUSD Superintendent Rich Newman said the HCRS is operating outside the law by setting up outside its parent’s district.

“The district must operate within the law and the unavailability clause, which Dehesa is claiming as the reason why the charter must remain in Alpine, is not a legal fence,” said Newman. “We filed a public records request with Dehesa and the Heights and have yet to receive a complete response.”

“We find it very disconcerting that the charter school determined that there were no suitable facilities to house its programs within Dehesa’s boundaries, even though there appears to be sufficient space at Dehesa here,” said Newman.

Newman encouraged the HCRC to put forth a good-faith effort to find alternative facilities in Dehesa and asked that the Dehesa board to take action to non-renew unless HCRC ceased all actions in Alpine.

“Alpine’s desire is to work cooperatively with Dehesa informally and without the need to initiate formal legal proceedings,” Newman said. “Should this matter be left unresolved, Alpine reserves all of its rights under the law to take any and all actions it deems appropriate to enforce them.”

Director of the HCRC Diana Whyte said that charter school had conducted multiple facility searches before choosing the Alpine location.

“I would like to officially ask Alpine to quit lying that we are there illegally,” she said. “There are no facilities in Dehesa that are even comparable to the size of the space that we lease.”

The Dehesa board voted unanimously to renew the charter.

“We have been in declining enrollment,” said Cindy White, president of the Dehesa school board. “We’ve been where you are, we do feel that frustration and we do sympathize. But we hear that they’re not even planning on sending their kids to your schools anyway, so I don’t get your end game with your threats and innuendo. To me, it seems like having the Heights in your community is good for your community. It brings in outside-of-Alpine dollars to your community.”

In addition to the legal grounds for a charter in Alpine, Whyte also said that the HCRC has performed very well academically.

“Our test scores have for the most part outranked any of the scores in our neighboring schools and in East County,” she said.

Founding parent and lead petitioner for the original charter Jen Hamilton said the HCRC has benefited both of her children immensely. Her oldest son just finished his freshman year at River Valley Charter School after finishing up eighth grade at the HCRC, she said, and he received all A’s.

“We actually had a River Valley teacher contact the Heights teachers to say what a difference their children make in the classroom,” said Hamilton. “This is one of the best charter schools in all of San Diego County and they say, ‘we can see a difference in your children’ and it’s because of the teachers.”

Hamilton said she also has a sixth grader with special needs and has been impressed with how her daughter’s needs have been met at HCRC.

“I know as a parent, living in Alpine, my children would not go to any other school in the AUSD. If the Heights didn’t exist, we would find another charter,” she said. “This is the best option for my children.”

“Off of Alpine Boulevard, you host a charter school where kids get to play, eat lunch and have P.E. in a parking lot — is that what’s best or safe for kids?” said Tompkins. “If you believe in the charter program and the seemingly dedicated and happy children that attend, and its continued success, then moving it to Dehesa campus will only enhance the children’s experience and truly be what’s best for students…Please put your students before your budget.”

Much of the debate centered around the budgets of both districts, to the frustration of HCRC parents.

Peel said that, during the suit against HCRC three years ago, she was continually harassed by teachers, parents and a now-board member of AUSD.

“A petition has been made from the Heights Charter Resource Center families in hopes that AUSD would hear our voices and understand that we will not tolerate the continued harassment from the district,” said Peel. “We respectfully present this petition in hopes to end the discord between HCRC and AUSD.”

Citing to the uniqueness of children and their need for individual attention, as well as the importance of supporting the whole child, the petition stated that HCRC parents chose the charter in the best interests of their children.

“We respectfully request that AUSD honor our rights as parents to choose where our children attend school,” the petition concluded.

Cheryl Irick, a teacher at Creekside Early Learning Center, said the issue is about more than the advantages to a few families.

“The location only serves to poach students from our district,” said Irick. “It puts money in your pocket, but it takes money from us and our students. As a neighboring district, it’s not a very neighborly thing to do.”

Irick said the Dehesa school board should be an example of integrity to their students by respecting their neighboring district and ending the unethical chartering of HCRC.

“It is a sad day when one public school district thrives at the expense of another,” she said. “We’ve gone from 20 teachers to eight teachers, and now two more excellent teachers will be leaving because of enrollment issues. This is Alpine Elementary, the heart of the Alpine school district. The issue is enrollment, much of which is lost to the Heights. I urge you to do the right thing for children tonight, not just for money for your district.”

But parents of HCRC said they were unhappy with AUSD’s treatment of their children.

Monica White said her son, who has severe dyslexia and attended Creekside Elementary, was underserved at his school in Alpine.

“He was let down each and every year,” she said. “He had a fantastic teacher but the special needs department was severely lacking, the superintendent was lacking, the support he needed was lacking. I didn’t go out looking for a different school, we were desperate.”

White said her son was also bullied at his original school in the Alpine school district.

“My son came back to me after being bullied severely for two years at Creekside, physically harassed, verbally harassed, harassed in the bathroom — it was unheard of,” said White. “The principle did nothing, the superintendent did nothing, his teachers did their best to try to help him but he suffered from that. After a year at the Heights, my little boy came back and I’m so grateful.”

HCRC parent Greg Fox said his son was also bullied in the Alpine school district. Fox’s son, while in sixth grade, had a bruised spleen from being kicked in the back, but Fox said the school did nothing.

“They said they would look into it,” he said. “They didn’t get back to us.”

Fox’s son just finished his junior year at Steele Canyon high school with a 4.03 GPA and named to the CIF all-academic golf team.

“What’s important here today shouldn’t be about the location of the school,” said Fox. “That’s rhetoric, that’s a ruse. They feel like, at this point in time, with that school being in that location, they are losing students. What they need to do is look from within.”

Fox said he was recently at an AUSD fundraising gala to raise money for $25,000 computers, but said nothing is being done about the school buses that are not in compliance. Fox also cited the raises that have been given to new superintendents while teachers are being cut from the schools.

“I found out today that the Alpine Union School district is losing 60-plus more kids to Los Coches middle school,” said Fox. “Why is that? It’s because they continue to have a culture where they don’t take care of business at home and, unfortunately, family and kids have to go elsewhere.”

CANDIDATES RUN TO FILL THE VACANT SEAT IN ASSEMBLY DISTRICT 79