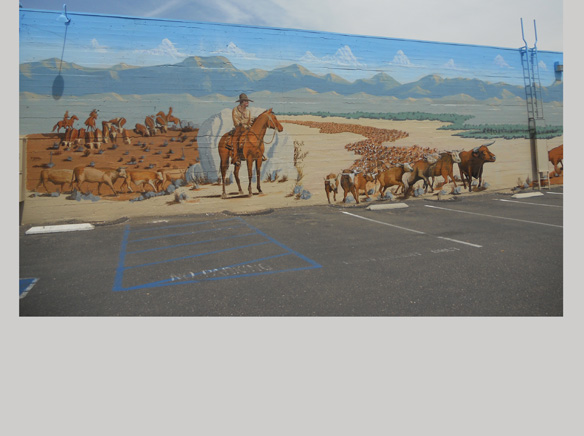 Lakeside artist, David Ybarra, created another slice of history with his latest mural, a cattle drive through Lakeside, during the Mexican era in California. It took more than a month to complete because Ybarra had to work in the blistering bright sun on some days and wait for the rain to let up on other days. Sometimes he even worked at night with lights shining on his work project.

Lakeside artist, David Ybarra, created another slice of history with his latest mural, a cattle drive through Lakeside, during the Mexican era in California. It took more than a month to complete because Ybarra had to work in the blistering bright sun on some days and wait for the rain to let up on other days. Sometimes he even worked at night with lights shining on his work project.

Ybarra said he first came up with the concept of the artwork when Pinnacle Peaks Steak House opened in Lakeside. He presented the idea to the owner of the restaurant and she liked it and thought it would be a good fit. He pitched his idea to the Maine Avenue Revitalization Association (MARA) and they set about raising money to get the job done. It took a couple of years for the funds to be raised, but finally they gave Ybarra the green light to do the work. Unfortunately the restaurant had closed down by then, so MARA wondered if they should continue with the project. The owner of the building, Steve Clapp, liked the mural idea and wanted to continue with the project, even though a different type of restaurant might go in that location some day soon. He is very happy with the mural.

MARA asked the artist to paint the mural with Lakeside landmarks, so folks would know that it was about the history of Lakeside, and he did—with El Cap Mountain in the background, the trees along the San Diego River that meanders through Lakeside, Lindo Lake in the distance, Mexican cowboys driving a herd of cattle, and the Estudillo adobe ranch house ruins. Ybarra said he got a real Bovine education on the anatomy of cows, since there were hundreds of them in the painting.

The history of Lakeside being cattle country can be found in the archives at the Lakeside Historical Society. According to Donald Harrison, the author of the book “Louis Rose, San Diego’s First Jewish Settler,” at the Society’s Gift Shop, Rose came through Lakeside on his way to San Diego in 1850. He was starving and chewing on his belt for sustenance. He came upon the Estudillo adobe ranch house. This was a huge cattle ranch during the Mexican Land Grant era. Mrs. Estudillo fed hungry travelers before they headed on into San Diego. An old photo of the adobe ruins can be seen at the History Center. This was in the days before Lakeside was purchased by El Cajon Land Company and split into sellable parcels of land for speculators and farms, before the town site of Lakeside was laid out.

Ybarra said he is looking forward to painting another mural, perhaps on the Agriculture Pest Control building across the parking lot from this one. He envisions a stagecoach and a train coming through Lakeside. He considers himself a sign painter and got his first job on Maine Avenue back in 1975. Looking up and down the street, his signs and murals are on at least 12 buildings, a fact to be proud of. He said his idea has always been to create old fashion signs in Lakeside’s Historic District. Even though he is a shy sort of guy, he does appreciate all the attention he gets from passersby, commenting on his talent and artistic work. He gave credit to his friend, Tracy McMillen, who helped with a lot of scraping, wire brushing and prep work to make the wall ready for his mural.