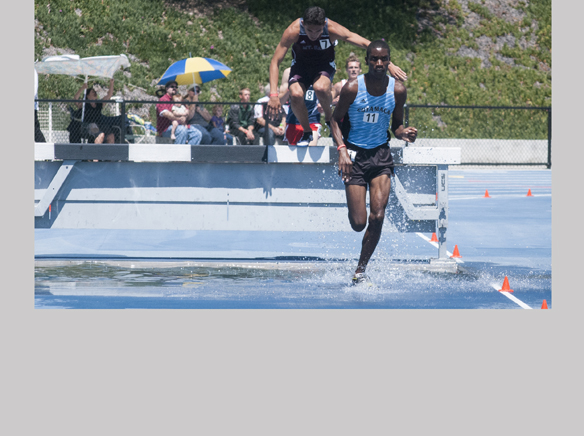 He also kicked off his left shoe.

He also kicked off his left shoe.

“This is the second time I’ve had my shoe fall off like this,” he said. “So going into it I just thought to myself, ‘I’ve got bigger things to worry about than my shoe right now.’ All that’s going through my head is let’s finish this and worry about my shoes later.”

Randolph, who graduated from Monte Vista High School in 2013, finished with a time of 9:42.83 – nine seconds faster than his previous personal best.

He also finished sixth after entering the race with the 11th best time in the field.

Fellow Coyotes sophomore Oscar Soto also finished sixth in his event, the 800m run, with a time of 1:55.18. Soto said he was energized by his teammate’s performance.

“Usually I don’t get to see the steeple run because I’m warming up,” he said. “But some of the races really pump you up before, like seeing Dane finish like that.”

Soto led the pack after the first lap of the two-lap heat, but he didn’t plan on it. He said he was in front because he started in the outside lane, which meant he started farther up the track to compensate for the longer curve.

“Since I was out in the ninth lane and I didn’t know who was around me, I just had to go. Just adjust to where I’m at and go with the flow.”

Sophomore Alex Templeton, however, had the best finish in the standings among Cuyamaca athletes. His 6-foot-9-and-a-half-inch high jump put him in a tie for second place in the CCCAA Championships, which were held at San Diego Mesa College.

“I was able to get a good night’s rest at home, not have to worry about travelling,” he said. “I competed at Mesa my first year … so to come back here kind of worked out perfectly.”

“I can look up – it’s my sky,” he said. “It’s not my track, but this is the home territory and the weather I’m used to that I always train in. This wind means nothing to me, this weather is the same to me. … there’s no better place to finish in.”

Freshman Sabrina Dozier took 12th in both the women’s hammer throw and discus, with throws of 40.35m and 35.38m, respectively.

In the men’s discus, sophomore Jovann Letuli took 10th with a 43.76m throw. In the fall, he was also an offensive lineman for Grossmont College and he will attend the University of Akron in Ohio on a football scholarship next fall. Templeton also played football for the Griffins in the fall as the team’s kicker and punter.

Though Randolph’s sixth-place finish may not seem as impressive as Templeton’s second-place spot or Giapa’s school record, but head men’s track and field coach Patrick Thiss said he was floored by Randolph’s improvement on his personal best.

“You’re teaching them that you’re either all or nothing and that’s not what we preach in the program,” he said. “… Winning’s great, but really it’s what you teach the kids along the way and what they take away from the track meet. Medals are great, but it’s the life lessons you learn in track and field.”

Individual sports like track and field, he said, are about pushing an athlete’s limits. If somebody else’s limits are higher, Thiss said, then that’s perfectly fine.

“Just because you’re not as good as another person, that doesn’t mean you’re not great,” he said. “You can only maximize what God gave you in ability. Find out how great your gifts are maximize them.”

With the personal best time, Randoph maximized his skill – as well as the life of his track shoes. He said he plans on getting new shoes in the near future, though whether he competes next year depends on where he transfers.

But even when he gets the new shoes, he said he would find a spot to keep the pair that wouldn’t stay on at the state championship.

“Great memories in these,” he said. “I could not have finished out a better track season in these shoes.