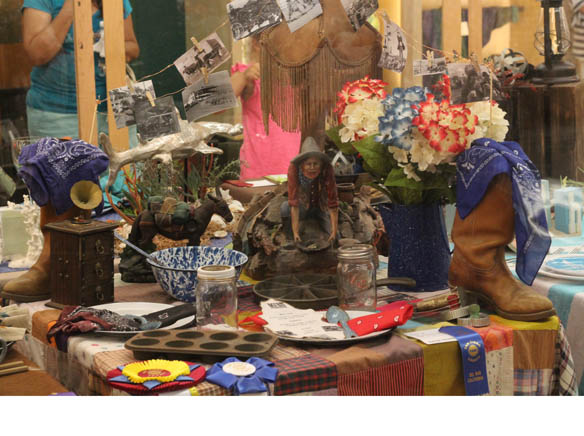 Most wanted in the West? Lakeside resident Giselle Halcott’s winning table decoration, at this year’s San Diego County Fair 2017, was wanted. So much so she won Best of Division, Best of Show, and a blue ribbon with a western themed “Where the West is Fun” table.

Most wanted in the West? Lakeside resident Giselle Halcott’s winning table decoration, at this year’s San Diego County Fair 2017, was wanted. So much so she won Best of Division, Best of Show, and a blue ribbon with a western themed “Where the West is Fun” table.

Nicole Merzi, Exhibit Rep II, for the fair said, “We had 880 entries in Home & Hobby with a total of 11,564 entries in all divisions.” More than 10,000 exhibitors participated this year. Merzi said to expect a transition for the fair’s tradition of printing its annual cookbook being “a virtual cookbook.”

In photography a number of East County residents, such as Carolyn Corless, of Santee, landed honorable mention ribbons. Terry Harp, of El Cajon, was just one of the representatives who won honorable mentions in the garden show competitions. Harp landed her ribbons in the container plants, cactus & succulents category. Dave Kingston, of Lakeside, won a first-place ribbon in the homebrew competition. Santee’s Michael Balazs won a second-place ribbon, another of several winners in this category.

Not all east county ties are from entries, former longtime Lakeside resident from ages 8-27, Jack Robertson, who now lives in Colorado, has been an assistant theme coordinator for the fair for 10 years. Robertson was manning the theme exhibit building, decorated with this year’s theme “Where the West if Fun”, that housed the gift shop, cowboy and Indian themed displays, and bar.

“Every year is a brand-new experience and different exhibits. This year East County’s Winchester Widows and Victorian Roses will perform, among many others, in line with the western theme,” he said.

Check the San Diego County Fair’s website for all winners in each division. Below are a few winners.

The fair runs until July 4. To access more information about the fair visit: www.sdfair.com.

Fundraiser helps Lakeside get one step closer to new library