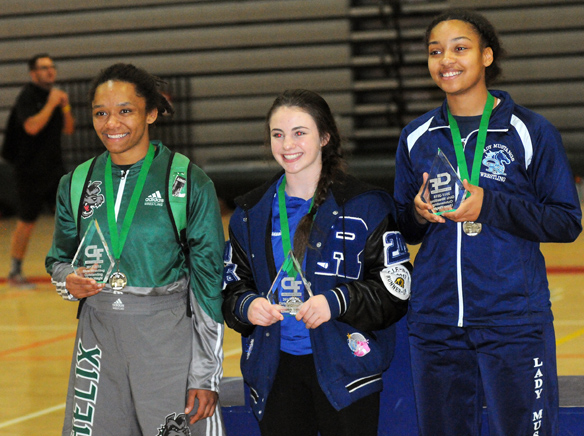 When the final whistle had sounded, three East County mat women had punched their ticket to the state championship meet Feb. 23-24 at the Visalia Convention Center.

When the final whistle had sounded, three East County mat women had punched their ticket to the state championship meet Feb. 23-24 at the Visalia Convention Center.

Lyng, who will be making her third appearance at the state meet, said her secret to success has been to never let up against an opponent — or herself.

“I never take a day off,” explained Lyng, who placed third at last year’s state finals. “I’m always doing something every day to stay active.”

A total of 221 wrestlers had preregistered for last weekend’s section finals. The tournament continues to grow both in numbers and caliber of competition.

The numbers tell the story in the growth of girls wrestling within the section. Wrestlers from 13 different schools won individual section championships this year while wrestlers from 23 schools will represent the section at the upcoming state finals.

“It’s come a long way,” explained tournament director Trevor Keifer, who coaches at High Tech High Chula Vista. “We started with about 60 girls and around 20 teams. We had 51 teams represented this year.

“The quality has improved dramatically. We used to see a lot of head-and-arm pins. The sport has gained more prestige. The program heads are starting to show up. We’re seeing bigger teams.”

Girls competed in 14 weight classes. The top two finishers in each weight class qualified to compete in the upcoming state tournament.

The top four girls in each weight class at the section finals received medals.

The 118-pound championship match featured an all-East County matchup between Nunez and Steele Canyon’s Toren Dunbar. Nunez (17-5) won by an 8-4 decision to secure first place in her weight class.

Nunez, who upset top-seeded Victoria Bjork of Westview by a 6-2 decision in the quarterfinals and finished the tournament with two pins, couldn’t hold her emotions at the final buzzer. But they were tears of joy.

Dunbar opened the tournament with three pins to meet Nunez in the final.

Lyng, meanwhile, turned in one of the most dominating performance at this year’s tournament with four pins in as many matches, including three in less than one minute.

Lyng, who has never been pinned, opened the event with pin times of 35 and 23 seconds. She pinned Montgomery’s Lelani Pompa in 1:26 in the semifinals before pinning Westview’s Kira Satnick in 43 seconds in the championship round.

Lyng improved to 19-2 with the 4-0 CIF tournament showing. One of those losses is to Loomis Del Oro’s Candice Corralejo, last year’s state champion.

Lyng feels she is a different wrestler this year, however, and will be out to prove it at the upcoming state finals.

She capped this year’s showing at the section finals by earning the Most Valuable Middle Weight award.

The section finals format for girls wrestling includes a match for a true second place.

Girls who lost their matches in the finals got a second chance to qualify for the state meet by meeting the consolation bracket winner for second place.

Steele Canyon’s Dunbar continued in the tournament following her finals loss to Nunez. Dunbar drew La Costa Canyon’s Cora Johnson-Woessner in the true second place match, with the winner guaranteed a berth in the state finals.

Dunbar officially was awarded third place in the weight class.

Baker secured her state-qualifying berth via the true second place match, although she did it from a different route.

Baker lost by a 45-second pin to top-seeded Karolina Valenzuela in the quarterfinals but battled through the wrestle-backs with four consecutive pins, including two sub-minute pins, to emerge as the consolation bracket winner.

Baker then advanced to meet San Diego’s Dulce Patino, who had lost by a 2:13 pin to Montgomery’s Larissa Vasquez in the finals.

Baker defeated Patino by a 12-4 major decision to secure the true second place and a coveted state-qualifying berth.

If a true second-place pairing features a rematch from a previous round, the result from that previous round is used rather than having the opponents re-wrestle.

Buel had previously lost to Otay Ranch’s Aylin Salas by a 6-3 decision in the semifinals.

Gordon had previously lost to Hoover’s Angelica Bautista by a 3:46 pin in the semifinals.

Thus, both Salas and Bautista were awarded second place and a trip to the state meet.

Buel and Gordon both successfully wrestled back to win the consolation bracket in a bid to qualify for the state meet.

San Pasqual, which field wrestlers in all 14 weight classes, won the team title with 148.5 points. Otay Ranch, which brought eight wrestlers to the tournament, finished second with 115.5 points.

The boys individual wrestling championships will take place Feb. 17 at four sites around the section. Wrestlers will be out to earn a spot in the following weekend’s San Diego Masters state qualifying tournament.

The state finals are scheduled March 2-3 in Bakersfield.