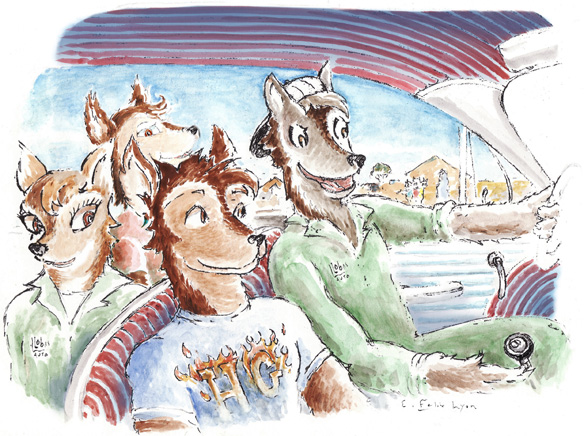 It is never too late to do what you always wanted, and author Jim Miles proved it with his children’s book, “Max and the Lowrider Car.” Miles was a clerk for Charles Schwab and a teacher, where he spent time doing what he’s always loved. A knack for telling stories, especially to children. An enthusiast for the literary and illustrative genres of animals, Miles is a follower of the furry fandom subculture and POGO comic strips. These things plus a little inspiration from wine labels and classic cars, Miles developed an idea for a series of chapter books about young, canine characters in fictitious world “Hound’s Glenn.”

Penning under the pseudonym Tonton Jim Miles’s first book in the “Hound’s Glenn” series, “Max and the Lowrider Car” is told from the point of view of fifth graders, the summer before sixth grade begins. It’s a story of belonging among friends, Miles said, with characters that have intense curiosity.

“The name Hound’s Glenn came from looking at wine labels. I thought of this place called Hound’s Glen where hounds live but wolves moved in and they all got along fine,” he said.

After the passing of his wife, Miles moved to a small mountain town, but ended up back in San Diego where he  was raised and went to high school with Ed Roxburgh.

They maintained their friendship over the years, similar to the friendship displayed in Max and the characters in Miles’s books. Miles told Roxburgh, a lifelong artists and scenic designer, what he was imaging for a book series, and the idea became more tangible, especially since Roxburgh knew a publisher named Linnea Dayton.

“Max and the Lowrider Car” was published in 2013 and the next book in the series, “Harold and the Hot Rod” will be released in June 2014.

Loyalty is one of the main takeaways, according to Miles.

“Friendship mostly is the theme,” he said. “I didn’t want to make anything dangerous, no supreme evil. It’s a whimsical world where they have to endure silly things and misunderstandings. And it’s a very settled world that they live in. This guy shows up with this customized car, they’re fascinated with it and want to build more. That means they have to go on a little quest.”

That car, Numero Uno, is based on a 1949 Chevy that is part of a classic car club Miles has seen and admired. In the first book, Max and his friends, a group of male and female protagonists run across other animals, where there is potential for strife.

“Important birds who they insulted,” he said. “Which leads to bad feelings but no violence. They don’t have a police force.”

“Max and the Lowrider Car” is a fun, fanciful journey for young readers to live in. The interactions and adventures that take place in the book mirror contemporary childhood experiences in a safe, positive setting.

Without the illustrations of Ed Roxburgh, (E. Felix Lyon), this book would lack the color and images that bring the story to life. Roxburgh, a resident of Lemon Grove.

“We have a lot of fun,” he said. “I’m more of a set and scenic designer. I’ve been a professional artist pretty much my whole life. By hand is my experience.”

By hand, by heart, or by luck, the “Hound’s Glenn” series has much to teach children as well as adults.

Miles has read at the Lemon Grove library, and Roxburgh instructed to aspiring artists. Book one is available through Barnes and Noble online and Amazon.com.

Janis Ian performing at The Magnolia