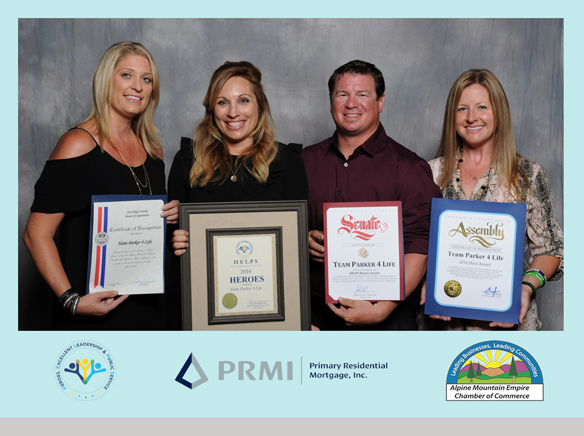 Chamber Executive Administrator Mary Rynearson welcomed everyone to the celebration of heroes, community partners and organizations, and small and large businesses.

“We are proud of everyone in this room for all that you do for our communities and your heroism,” Rynearson said as the program began. “If we are not making someone else’s life better, then we’re wasting our time.”

Virginia Christman and her husband, Dr. Ron Christman, were among the heroes honored. They have spent decades maintaining and sharing the culture, language and traditions of the Viejas Band of Kumeyaay Indians. Virginia Christman gave the traditional Kumeyaay dinner blessing. “The Alpine Chamber of Commerce and the Kumeyaay have a long history together,” Viejas Tribal Chairman Robert Welch told the crowd. “We want to perpetuate that.”

Community Organization Recognition was awarded to President Tom Myers of the Alpine Historical Society and his wife, Judy, who also helps the organization.

The Kiwanis Club of Alpine earned the Community Organization of the Year award for its community support programs and services.

Named “Citizen of the Year” for his many Kiwanis and other endeavors, Dan Foster presented a Hero’s Award to veteran Bill Ridenour. Ridenour has worked to add the names of almost 70 military veterans to the Alpine Veterans Wall of Honor.

Nica Knight, who supports the Mount Laguna area in many ways, and Team Parker 4 Life, which helps children with cancer, earned the same Heroes recognition.

Bobbi Brink, founder of Alpine’s Lions, Tigers & Bears animal rescue preserve, and Sam Diego, who helps child cancer patients and families, were named Humanitarians of the Year. Brink couldn’t attend because she was on another road trip to save animals.

“We all have the power to give back,” Diego challenged everyone.

Everyone stood to applaud long-time community activist and educator Al Haven when he received his Lifetime Achievement Award. Haven continues to fight for a high school in Alpine.

“Albert Haven is an original and a true hero by any standards,” said Mistress of Ceremonies Carolyn Fisher.

The Chamber Ambassador of the Year Award was presented to Chamber Director Darryl Bush of Keller Williams Realty.

Alpine Boy Scout Troop 105, which provided the flag color guard and pledge of allegiance, earned the Youth Organization of the Year honor.

The Beautification of the Year award went to the Alpine Woman’s Club, which owns and maintains Alpine’s pioneer Town Hall building.

Publisher Vonnie Sanchez of The Alpine Sun presented the newspaper’s Newsmaker of the Year Award to the Alpine Library Friends Association. The association raised $460,000 for furnishings for the new Alpine Library, now nominated for an architectural “Orchid” award.

Special Recognition Awards were presented to businesses and individuals “who have demonstrated a passion for their communities” —- Alpine Beer Company; Bree Rowand of the Kylie Rowand Foundation; Kimberly Bowley; Sue Roff and the Back Country Land Trust of San Diego County.

In addition to her sparkling emcee work for the event, Carolyn Fisher accepted recognition as spokesperson for the Marfan Foundation. Fisher is an award-winning world arm wrestling champion and motivational speaker whose son suffers from the painful Marfan’s joint disease.

Area pageant queens added glamour as well as assistance during the evening’s opportunity drawings, auctions and presentations. Center pieces were sold to earn money for the annual local students’ trip to Washington, D.C.

“The tradition of the Alpine Mountain Empire Chamber recognizing community members was taken to a new height,” Jeff Campbell of Jeff Campbell & Associates said later. “Every person who was deserving and nominated was recognized. My table (of attendees) was so enjoyable that we all went out to a party afterwards!”