Nestled in Spring Valley on Troy Street, in normal times, Cali Comfort BBQ is bustling with BBQ and sports fans alike. Owner Shawn Walchef opened Cali in 2008 in the middle of a recession and over 12 years built a community that reaches far beyond the small town. With its slow grilled BBQ and sports bar vibe, Walchef said that this business is far more than just a restaurant, it is a community.

While preparing for a great day of sales on St. Patrick’s Day, the COVID-19 epidemic in full throttle, suddenly all restaurants had to close doors to patrons and quickly move to pickup and delivery services. Although Walchef saw this coming, March 17 turned out much differently than originally planned.

“We had to lay off 27 on St. Patrick’s Day [retaining 28 employees],” said Walchef. “Which is the most difficult thing I’ve ever done since owning this restaurant for 12 years. Not just telling everybody. But telling them so abruptly. But our thinking was that the sooner that we notified them, the quicker they could get in line for unemployment so they could actually get paid while they were not working.”

To keep the restaurant running during a shutdown, Walchef said they were fortunate that they already had systems in place for ordering online with a mobile friendly website, a large social network and a community built over more than a decade.

“Doing to-go ready was a priority for us digitally was important,” said Walchef. “So, it wasn’t as difficult for us as other restaurants that don’t have that set up or have food conducive for doing take out.”

Something Walchef didn’t see coming due to the coronavirus is the ability to have cocktails on the go. And this has been a popular pull for its customer base.

“That has been one of the most successful things that we have done. We asked our fans that have been coming to our restaurant for the past 12 years what would they want us to serve,” said Walchef. “This biggest response was our fishbowls, a sharable cocktail, Mai Tai. margarita, special martinis that we’ve packaged in way that they are sealed and when you order food online, they take it out with a container, they get a fishbowl with it and a little duck and they get to enjoy a virtual happy hour with their favorite drinks at home.”

Walchef said over the years, Cali Comfort established incredible partnerships around town. One of them, the San Diego Gulls. On April 9, the San Diego Gulls Foundation coordinated and purchased 800 meals and delivered them to Sharp Chula Vista Medical Center.

“They partnered with five restaurants, us being one of them, and they purchased 150 meals from each restaurant,” said Walchef. “Once we posted that on social media, another $600 was donated, so we delivered 210 meals down to Sharp in Chula Vista just to thank them. It went to all the different departments in the hospital including the ICU and COVID wards. It was very welcomed by all the hospital staff.”

Walchef said celebrating 12 years during the coronavirus really gives you a perspective of how the restaurant business has changed. But also, more importantly, it has taught us how the community has embraced Cali Comfort over the years.

“We’ve made it a point to do as many community events as we can, not just here in Spring Valley, but La Mesa, Lemon Grove, Santee, Central San Diego, Chula Vista … you name it,” said Walchef. “If someone has asked us to do it, we made it a point to give back whether it was a church, school, fire department, a local charity, Little League. Now that we are in the position that we are in, we are very lucky that we have a community that wants to support us and is engaged with us on social media. That is a blessing that we have.”

Walchef said other restaurants don’t have the tools that they do, with a vast community to come out and support them during the shutdown. “So even if they are open and good for to-go, if you don’t have the communication piece now in 2020 on Facebook, Instagram, Twitter, YouTube and Yelp,” he said. “If you don’t know how to use those platforms it is very difficult for people that are staying in their house and you need some business.:

In 2017, Walchef started a weekly YouTube show and podcast to have conversations with other business owners. Not just in restaurants, not just in BBQ, but people in digital media,  entrepreneurs he admired, to have a conversation. What were the failures that they had on their entrepreneurial journey, successes, and also what do they see coming in the future and how the digital landscape changing their business. Walchef said it is a “top of the mind” conversation that covers a myriad of topics, depending on the guests.

“These are the kinds of conversations that we wanted to have every week,” said Walchef. “We’ve been able to do that with some incredible people that I thought I would never be able to interview. From David Meltzer [sports entrepreneur and author] to [former Chargers] Nick Hardwick, Heather Myers (Channel 8), Tabitha Lipkin (Fox 5), Ugg Founder Brian Smith.”

Walchef said they work so hard to build our businesses. “So having a podcast that is on demand is giving people a chance to have a seat at the table, with fascinating guests whose life lessons can help other people no matter where they are in the world,” he said. “Not just in the restaurant or BBQ business. We have people that listen from Norway, Australia, Canada that just want to improve their lives and do that to the best of their abilities.”

Walchef applied for both the Economic Injury Disaster Loan and the Paycheck Protection Program (PPP). Although approved, it didn’t get funded, because it ran out of money. With the new federal stimulus bill might change that.

“Right now, we are approved again, but until we see the money in the bank account, we don’t take anything for granted. We are still exploring all options,” said Walchef.

Visit calibbq.media for take-out orders and links to its social media networks. 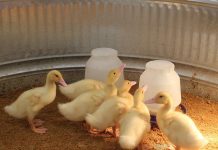