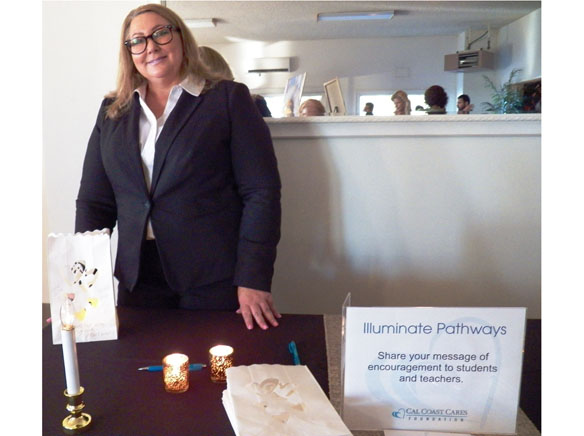 The organization’s dedication to serving students and educators has continued throughout the enterprise’s history, even as the company evolved. The credit union has provided student scholarships since its inception, and teacher grants were added with awards initiated three years ago. A particular focus of the awards has been scholarships for youngsters in the foster system, who experience unique financial challenges in pursuing education. Foster youth have a 50 percent dropout rate in high school. Only 10 percent enter college, and only three percent graduate.

“The financial need for foster youth is real. We really want to grow this year after year after year,” Lane informed attendees during the short formal program.

The money distributed benefits recipients throughout the community, including residents of East County during 2017. Student scholarships of $1,000 each were awarded to Karsyn Swift from Steele Canyon High School, who plans to attend the College of Idaho, and to Sharayah Moore from West Hills High School, planning to attend Azusa Pacific College. Teacher grants this year went to Santee educators for a varied mix of projects. Betty Grable, a sixth grade teacher at Santee Elementary, received $1,930 for the Sphero SPRK robots project. Fifth grade Santee Elementary teacher Molly Maloy, was awarded $954 for Breakout EDU kits. Joseph Kearney, who teaches fourth and fifth graders at Santee Elementary, was given a $1,300 grant for kits to teach coding and robotics. The credit union further sponsors four annual scholarships for students at Grossmont and Cuyamaca Colleges.

Cal Coast Credit Union has 160,000 members enrolled in Greater San Diego and Riverside Counties. The financial institution has over 600 ATMs in San Diego County, with branches in Santee, La Mesa and El Cajon. The foundation is set to add community members to its board in coming days.