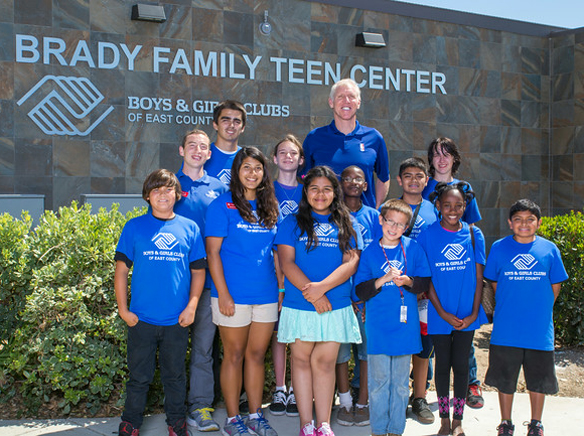 The Boys & Girls Clubs of East County (BGCEC) has announced more than $5.6 million has been raised towards a goal of $9.4 million for its fundraising effort called the “La Mesa Capital Campaign” that includes construction of a new 25,000-square-foot clubhouse on the campus of La Mesa Arts Academy, previously known as La Mesa Middle School.

The Boys & Girls Clubs of East County (BGCEC) has announced more than $5.6 million has been raised towards a goal of $9.4 million for its fundraising effort called the “La Mesa Capital Campaign” that includes construction of a new 25,000-square-foot clubhouse on the campus of La Mesa Arts Academy, previously known as La Mesa Middle School.

Higgins also said approval for the new clubhouse has been received from the California Division of the State Architect (DSA), the governing body for construction on public school campuses. “We have met the stringent requirements and now we’re shovel-ready from a permitting standpoint,” he said.

The BGCEC’s La Mesa Capital Campaign includes funding for the new clubhouse on the west end of the middle school campus as well as renovations completed last year to an existing teen center also located on the middle school’s property, plus an endowment to operate both facilities.

“Of the $9.4 million goal for the capital campaign, we have received total pledges of $5.6 million plus an in-kind donation in grading services valued at about $200,000,” said Higgins. “So, we have about $3.7 million remaining.”

When completed, BGCEC officials said both the Brady Family Teen Center and Brady Family Clubhouse would serve up to 400 children a day, ages 5 to 18.

Roughly one third of the $9.4 million goal for the La Mesa Campaign came from Ron and Mary Alice Brady, owners of the Brady Companies, a La Mesa-based construction company specializing in metal stud framing, drywall installation, doors, frames, and acoustical ceilings. In 2014, the Brady’s pledged $1 million to renovate the existing teen center, which was renamed the Brady Family Teen Center, along with $2 million to help build a new yet-to-be constructed clubhouse to be called the Brady Family Clubhouse.

Mary Alice said, “We are so very excited, grateful and proud to be part of this effort that will impact young people for future decades. We are very blessed for the opportunity to be part of the team.”

The previous renovations to the Brady Family Teen Center on the middle school campus included an exterior face-lift and interior upgrades, including flooring and carpeting, new furniture, computers and a security system. The existing teen center, opened in October 2006, is a popular home-away-from-home for La Mesa’s 11-to-18 year olds.

The new 25,000-square-foot Brady Family Clubhouse will be the largest of the six Boys and Girls Clubs of East County. The clubhouse will feature a learning center called The Academy, a full-service kitchen and nutrition center and Little Rascals area for 5-to-7-year olds, plus a 10,000-square-foot Bill Walton Gymnasium, named after the La Mesa native, Helix High graduate (class of 1970), former professional basketball player and current broadcaster on National Basketball Association (NBA) games.

Chairman of the capital campaign is Steve South, president/CEO of EDCO Disposal. “We are appealing to everyone in the community to become involved by adding their name to the Brady Family Clubhouse,” said South. “We believe this new clubhouse will be a game-changer in our community.”

South said donations range from $500 to become a “builder” on the donor wall to $300,000 to fund a game room or playground for young club users. A donor’s name on a an outdoor play structure will run $100,000, while $30,000 is being requested for either a check-in counter, set of outdoor bleachers or a director’s office. Sponsoring a backboard or a scoreboard is $20,000, while purchasing office furnishings or equipment for the nurse’s station is $10,000.

“The new clubhouse will be a catalyst to help change the entire western La Mesa area,” said La Mesa Mayor Mark Arapostathis, who also is a co-founder of La Mesa Arts Academy and the director of theatre arts at the school as well as director of Peter Pan Jr. Theater and C. Hook Theater. “When the doors open on the first day, the impact on our youth will be tremendous.”

Brian Marshall, superintendent, La Mesa-Spring Valley School District, said, “Our district’s partnership with the Boys & Girls Clubs of East County and its after-school programs is beneficial to everyone in the community. Adding a clubhouse to the La Mesa Arts Academy campus will enhance the education of our students.”