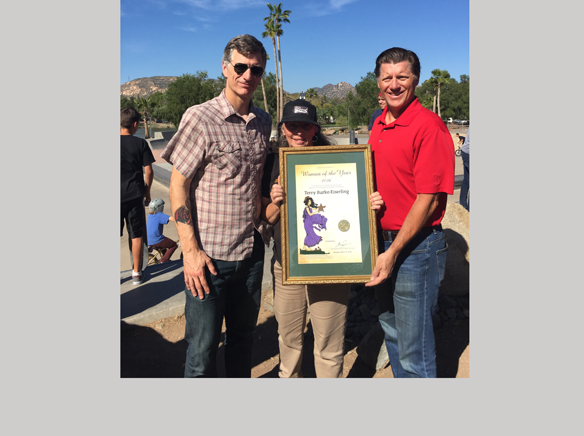 Assembly Member Jones, R-Santee, honored Terry Burke-Eiserling as the 2016 Woman of the Year for the 71st Assembly District during a special ceremony at the Lakeside Skate Park on March 25.

Assembly Member Jones, R-Santee, honored Terry Burke-Eiserling as the 2016 Woman of the Year for the 71st Assembly District during a special ceremony at the Lakeside Skate Park on March 25.

“One of the best perks of being a Legislator is having the opportunity to publicly recognize amazing individuals who spend their time making District 71 a better place. I am proud to represent such an incredible constituency, made up of people like Ms. Terry Burke-Eiserling of Lakeside,” said Jones.

Jones said he was first introduced to Terry when he was working to pass AB 1146 last year. Burke-Eiserling had been a force behind the construction and opening of the Lakeside Skate Park, and was committed to challenging the liability speed bump the park was facing in regards to other wheeled devices being allowed to use it. While Jones was busy passing the bill through committee in Sacramento, Burke-Eiserling was rallying troops in the skate community to send support.

“Little did I know the depth at which this woman operated,” said Jones.

Jones came to learn that her passion for her community and the youth who reside in it runs deep. Every Wednesday afternoon, she gleefully dawns her “Skate Mom” hat and volunteers at the Lakeside Teen Center, investing in the lives of our youth, getting the kids involved and invested in their park. She spends her weekends attending skate competitions, where she boasts about her park and her “kids”, and continues to drum up donations for the park selling lanyards and stickers.

“I personally had the pleasure of witnessing her interaction with these youth and was touched by their admiration and respect for her,” said Jones. “She demonstrates care and respect and it is reciprocated by those she influences.”

Burke-Eiserling’s love of community extends beyond the grounds of the skate park. Whether watering the trees on Winter Gardens Blvd. or picking up garbage around her beloved skate park, she has a reputation for seeing a need and going above and beyond to see it gets met. After working closely with the Lakeside Sheriff’s department and county to close down a drug house next door, she organized a BBQ at her home to thank the Lakeside Sheriff’s Deputies and the County employees for a job well done.

Burke-Eiserling continues her incredible influence throughout the district as a member of the Lakeside Women’s Club, Lakeside Garden Club, Lakeside Collaborative Coalition, Lakeside Teen Center, and the Friends of the Lakeside Library, where she is currently helping to raise over $100,000 for equipment and supplies for the future library.

“We in the 71st are incredibly blessed to have this magnificent woman in our district and I am pleased to honor her as 2016’s Woman of the Year,” said Jones.

Changes to TransNet tax under review, funds may be repurposed