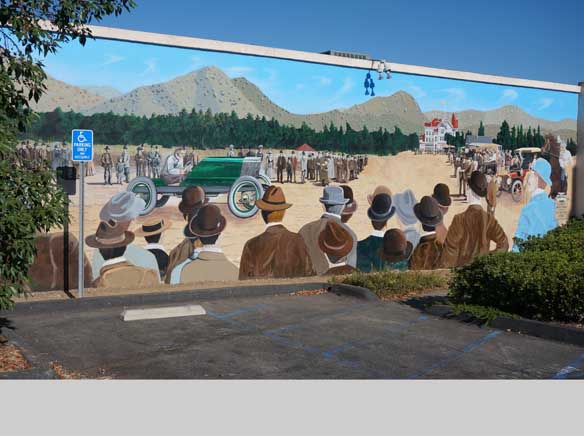 If enthusiasm were donuts, Joel Scalzitti would surely have a Baker’s Dozen.

Scalzitti is the man who is bringing Mary’s Donuts to Lakeside. The much loved and well known Santee donut shop will soon open a second store in Downtown Lakeside. That announcement has brought a lot of excitement to the community.

If enthusiasm were donuts, Joel Scalzitti would surely have a Baker’s Dozen.

Scalzitti is the man who is bringing Mary’s Donuts to Lakeside. The much loved and well known Santee donut shop will soon open a second store in Downtown Lakeside. That announcement has brought a lot of excitement to the community.

Scalzitti was born in Chicago. His family moved to San Diego’s east county region when he was about six years old. He grew up in La Mesa, but has been a Santee guy for most of his adult life. Joel’s father Augie owned and operated a barbershop for years on Carlton Hills Boulevard, where he taught his son the trade. Joel said many of Santee’s elected officials and community leaders frequented the shop. He listened and learned a lot about politics and local issues. He felt he was privy to the pulse of the community and was fascinated by it. Someone suggested he run for the Helix Water District and in 2000, Joel was elected to the Board of Directors. However, Joel was removed after a little controversy as to whether he lived in the district. He tried again unsuccessfully in 2008. Finally in 2012, Joel was reelected to the Board. His district covers parts of Lakeside, including Lake Jennings and the El Monte Valley.

So how did he go from the barbershop to the water district to donuts? His father Augie was a friend of Mary Hennessey, the owner and operator of Mary’s Donuts since 1984. Mary asked if Joel could “help out” with the business. Turns out he could and he became her right-hand man. This was when the shop was still at its original location on Mission Gorge Road.

The closure of the original Mary’s Donuts earlier this year is still a sore subject. Suffice to say the land was sold and the donut business evicted. They opened the new store less than a mile away.

Scalzitti had it in the back of his head to open a second location and he wanted to run it. When Mary’s moved, they were going to operate both locations, using one as more of a wholesale operation for large orders and possibly even delivery. When the original site closed for good, the second store idea was put on hold, until Joel was driving through Downtown Lakeside recently.

He saw a vacant old factory building for lease at the corner of Maine Avenue and Laurel Street. Something about the address – 10101 – reminded him of maple bars lined up with donuts in between. “The location grabbed us,” he said with a smile.

As luck would have it, the building’s owner was inside at the time and he stopped to talk. Turned out the building and location was just what Joel had in mind.

That old building dates back to 1910, when W.D. Hall built it and opened the Lakeside Hardware and Lumber Company. In 1914, the new owner put the town’s very first gas pump there – Red Crown Gasoline for 21¢ a gallon. By 1950, the building housed the Lakeside Builders Store. In more recent years, the site has seen a number of businesses come and go. For him, it is a good fit.

So the next big question is: when will Mary’s Donuts open in Lakeside? The answer is frustratingly vague: “soon.” The development is still in the County permitting process. Then there will be some upgrades and construction at the new site. But Joel has most of the equipment needed already on hand. He is now searching for bakers – a skill he has discovered is hard to come by.

“We are striving to do exactly what we do here (at the original Mary’s) – a mirror image,” he said.

Quality control is very important to Scaltzitti. He also wants to be a good neighbor; he has already joined the Lakeside Chamber of Commerce and reached out to several similar businesses in the area.

Interest has been readily evident. When the new store was announced on Facebook, Scalzitti said they received over 60,000 views in the first four days. There is much talk around town as well. Many see the coming of Mary’s Donuts as more proof that businesses can be successful in Downtown Lakeside, something neighboring the Eastbound restaurant (just across the street) can attest to.

These are exciting times for both Scalzitti and Downtown Lakeside. He says he is impatient, but is taking the time to make sure he gets it right. He is very dedicated to Mary and her vision. The community will soon appreciate that.

A new masterpiece in Downtown Lakeside in the works

At the other end of Downtown Lakeside, David Ybarra is at it again, which is a good thing. The Lakeside resident and unofficial town artist is upgrading a past masterpiece.

In 2000, David was called upon to decorate the east side of the building at Woodside and Maine Avenues. His depiction of early Lakeside called forth some of the most iconic references in the community’s fascinating and storied history.

The mural faces the site of the long gone Lakeside Inn, a spectacular Victorian hotel built to lure people to the town in 1886. The Inn drew tourists (many of whom arrived by train) for over 30 years before being dismantled. Its most flamboyant owner, John Gay, created controversy by fencing off nearby Lindo Lake, claiming it to be part of the Inn. Then he built a 60-foot wide track around the lake. In April 1907, the newly constructed racetrack hosted its very first automobile race. None other than Barney Oldfield piloted his “Green Dragon” against Bruno Seibel’s “Red Devil.” The San Diego Cuyamaca and Eastern railroad scheduled special excursion trains to transport folks – as the roads then were both few and of poor quality.  The event drew the largest crowd ever to come to Lakeside (for the time). The San Diego Union of April 22, 1907 reported that Oldfield set a new speed record of 70.3 mph at the Lakeside Racetrack.

Both the track and the Inn were gone by the end of 1920. The park was opened back up to the community (after a lengthy lawsuit) and the Inn was closed because of waning profits and then demolished.

David’s mural focuses on Oldfield and his car, surrounded by the many onlookers of the day, with the Lakeside Inn prominently at one side. The historic Boathouse and the Old Community Church tower (now the Lakeside Historical Society headquarters) can also be seen.

The mural had been suffering in recent years, worn down by the elements, so the Maine Avenue Restoration Association (MARA) stepped in to hire David and finance the repair work. The colors are again rich and eye-popping. It is truly one of David’s best works and a fine representation of one of the most historic moments in Lakeside.

“A Christmas Past” sets a different mood for the holidays

Fashion for a cause