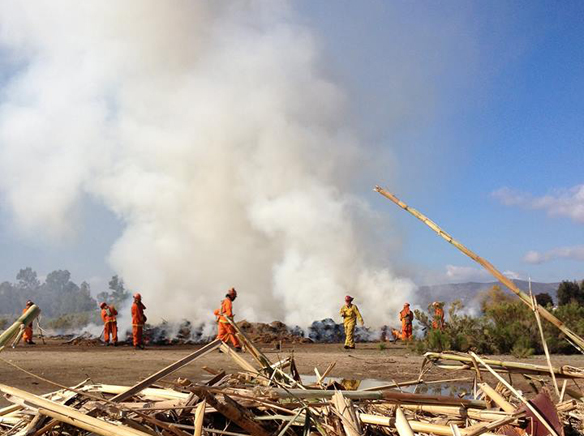 Arundo–An invasive plant that looks similar to bamboo, it grows in streambeds, and rivers and is highly flammable.

Arundo–An invasive plant that looks similar to bamboo, it grows in streambeds, and rivers and is highly flammable.

The Cedar Fire of 2003 brought to the attention of Cal Fire and our Local Lakeside firefighters, just how flammable this plant is in our dry countryside. Flames rushed up the dry streambeds choked with arundo, which acted as a wick to quickly burn homes and many outbuildings.

With that horrible scenario in mind the Lakeside River Park decided to take on the task of removing arundo from the streams and watershed in and around Lakeside. They first started with their own 100-acre piece of land along the San Diego River, which is between Highway 67, Mapleview Road and Riverside Drive.

They hired Cal Fire, a state agency, which had the young men in orange jumpsuits, working to cut down and haul away the invasive plants. These young men are actually low risk inmates who are serving time for non-violent crimes. Keeping them busy is a part of their education and job training to fight fires and become better citizens.

Christina DeLeon, who is the arundo control manager at the Lakeside River Park, said this project is in partnership with the San Diego River Conservancy and grants to fund it have come through them.

Her job is to contact the landowners along the creeks and try to get them interested in having their arundo cut down and hauled away. She mails or calls them with information about the removal project.

“At first they are reluctant and some are shocked that we get grants from the state so it is a free service we offer, they usually go for it…if they don’t have to pay,” said DeLeon.

To DeLeon’s surprise some property owners don’t want the Arundo removed because it is their privacy screen. Those properties are not cleared but DeLeon warns them about being fire prone.

Last Mother’s Day a large fire broke out in the Los Coches Creek along Old Highway 80 in the Johnstown area. Smoke and flames filled the air, as the arundo burns very hot. One homeless camper lost her life in the fire. Other people who lived in trailers nearby had some damage as well.

Amy Huie, who is the field supervisor for the Lakeside River Park, works directly with the “boots on the ground” crews. She said they usually consist of 15-20 young men. This year they removed 15 acres of arundo in Los Coches Creek. They have also removed some in the Lake Jennings Road area of the same creek. Huie said, “Recently a fire broke out in the Lake Jennings Park Road area and our Lakeside firefighters said it was a lot more manageable because we had removed most of the fuel.”

The Cal Fire crews have chainsaws to cut down the arundo. They also have a large chipper to cut the plants into 2×2 inch pieces. Sometimes the chips are left to be used as mulch.

Most times they put the plants into two huge dump trucks that are filled many times a day and hauled away to the River Park land for further mulching or a controlled burn. Removal of arundo can only take place from Sept. 15 to Feb. 15 because bird-breeding season puts a stop to the cutting of habitat.

This year 2,700 cubic yards of chipped Arundo were hauled away for the River Park’s disposal.

In the future they hope to work with Green Leaf Power of Mecca, who will use it to produce electricity, arundo would be a renewable source for energy.

Woman re-sentenced 26 to life for killing of stepfather