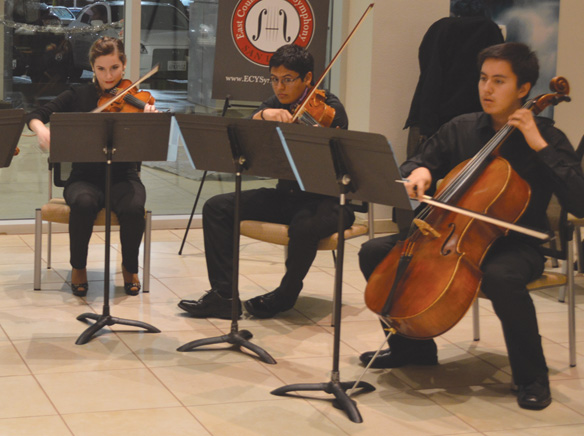 Soloist Troy Bui, eight years old, stood just taller than the height of the piano as he played the violin in front of a crowd. An 11-year-old and 10-year-old followed him, dressed in their best, with a waltz by Brahms impressing the audience gathered at the Joan Kroc Center on Wednesday, Nov. 20.

Soloist Troy Bui, eight years old, stood just taller than the height of the piano as he played the violin in front of a crowd. An 11-year-old and 10-year-old followed him, dressed in their best, with a waltz by Brahms impressing the audience gathered at the Joan Kroc Center on Wednesday, Nov. 20.

While most youth plug in to media and listen to music very different than eighteenth-century symphonies, the young members of the East County Youth Symphony (ECYS) are getting educated and cultivated in classical music with professional instruction by Alexandra Keegan and her team who founded the ECYS in 2007.

The ECYS has two symphony orchestras, a concert band, chamber orchestra and beginning orchestra division for younger musicians. After the three soloists began the evening, a group of beginning students set up on the stage for six short songs.

The emcee for the performance, Tia Robinson called them “our babies, it’s their very first year.” Young and small enough to endearingly be referred to as babies, the children on stage with violins, reading and playing their music with mature focus composed themselves like anything but babies. Its conductor was Kiersten Smith, their teacher at ECYS. Smith was followed by the Beginning Chamber Orchestra, which included many of the first year students.

Diego Guerra, a 15-year-old musician who learned under the tutelage of Keegan, and has taken to composing, conducted the Beginning Chamber Orchestra. Guerra was a natural as conductor before the young musicians, many of them standing physically shorter than the instruments, which make up their orchestra. Once the “Half-Minute Waltz” and “Ode to Joy” played by the Beginning Chamber Orchestra hit the audience with familiarity and resonance, the age of the performers did not matter. The beginners of ECYS made music that evoked unity and happiness to those who were listening.

Everyone in the audience applauded and smiled broadly after “Ode to Joy”, the family and friends of the performers easy to identify with large bouquets of flowers in their laps to give to the musicians, post-performance.

Second-grader Grace Douglas is one of the beginning, first year students that plays the violin and has attended two sessions with ECYS.

“We are getting so much out of the experience, including some mastery of basic music and the violin but also practice and teamwork,” said her father, George Douglas. “Also, events [like the concert] get her used to stage performance and expose her to some culture, and shows what people are capable of when they work hard and come together.”

Hard work is the only way it happens—the Beginning Chamber Orchestra practices two to three hours every Saturday morning at Cuyamaca College. The Advanced Orchestra took the stage after the Beginning Chamber Orchestra. Conducted by Keegan, a native of Ukraine with two M.A.’s and twenty-three years experience, the orchestra with many older children performed Beethoven’s Symphony No. 3 “Eroica” (Italian for heroic).

The venue capacity felt irrelevant, the age of the performers was not a factor. The early nineteenth-century symphony the Advanced Orchestra performed filled the Kroc Center with recognizable elements of developing professional musicians.

The appreciation for the work of the great composers was evident in the appearance, the tone and harmony of the ECYS’s musicians, big and small. “You could be looking at the future of the San Diego Symphony,” whispered a woman in the audience to her husband.

The musical culture and education are available in East County with minimal fees. To learn more about East County Youth Symphony, visit their website at ecyssymphony.com.

Women do not have to choose between recovery and their children...