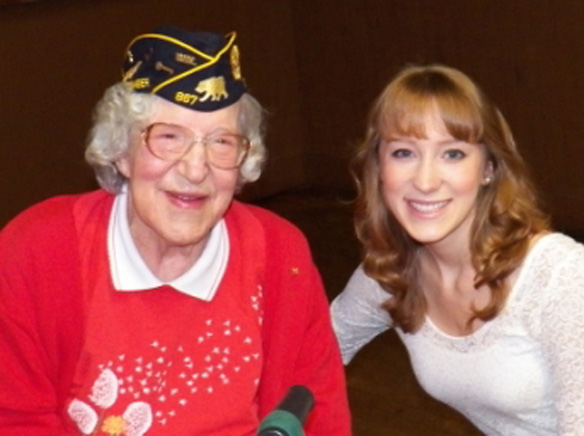 Think of The American Legion in organized assembly, and you likely will not envision women, front and center for celebration of their service on behalf of patriotism.

But the District 22 meeting of The American Legion on Saturday, June 2nd, which gathered veteran leaders from throughout San Diego County, honored two women of distinction for their efforts in support of the Legion’s mission “For God and Country.” Hosting the meeting was La Mesa Post 282, located at 8118 University Avenue.

Think of The American Legion in organized assembly, and you likely will not envision women, front and center for celebration of their service on behalf of patriotism.

But the District 22 meeting of The American Legion on Saturday, June 2nd, which gathered veteran leaders from throughout San Diego County, honored two women of distinction for their efforts in support of the Legion’s mission “For God and Country.” Hosting the meeting was La Mesa Post 282, located at 8118 University Avenue.

Joan De Munbrun, a member of the Charles W. Turner Post 867 at the Chula Vista Veterans Home, was celebrated for her 66 years of active membership in The American Legion and for her upcoming 100th birthday on Flag Day.

De Munbrun attained the rank of Army Sergeant, high for women in the military services at the time. She recalled that she was among the first group of women accepted into the U.S. Army.

She requested to go into the field, and she served as a photographer for the Army. Her military comrades called her “Miss Sergeant.”

She received an early assignment at the AT6 Flying School, where pride and anguish mingled, as she developed negatives for pictures of pilots completing successful training sessions and missions as well as photos for family members of pilots who had become casualties. She later spent a year and a half as operational director for aerial cameras.

When De Munbrun joined The American Legion in 1947, World War I veterans were not welcoming women in their posts, so female veterans formed their own distinctive posts.

De Munbrun was a member of Post 631, Lost Angeles Women, for 25 years. Acknowledged for her leadership and recruiting efforts within The American Legion, she was California Legionnaire of the Year 2002. District 22 Legionnaires serenaded “Miss Sergeant” De Munbrun with a rousing verse of “Happy Birthday.” District 22 Commander Rod Van Orden presented her with a slice of cake bearing one candle for her century of dedicated life.

Next up for recognition was Audrea Taylor, an 18-year-old East County resident and winner of this year’s El Cajon Post 303 Oratorical Contest, who advanced as top finisher in the District 22 patriotic speech competition, then was awarded second place at the Area 5 level.

Taylor delivered her winning 10-minute speech, which framed rebuilding the World Trade Center after the terrorist attacks in 1993 and 2001 as a metaphor for restoring citizen understanding of the Constitution.

She described both the physical structure of the towers and the constitutional structure of U.S. government as “architected” for strength and endurance. She identified the Constitution as the nation’s “most valuable asset,” and she remarked that today, “The power of a single person has never been greater.”

She called on everyone present to energize that individual power for renewal of dedication to the country.

District 22 is championing a resolution for consideration at the American Legion Department of California convention in Palm Springs later this month, based on the brief controversy that erupted when a repeat judge for the Area 5 Oratorical Contest was observed erasing and changing speech evaluation marks for Taylor.

Dubbed “Audrea’s Resolution,” for short, the measure, if adopted, would resolve that contest judges should not serve consecutive terms.

Ann Marie Pina-Brown, Past Commander of San Diego Post 6, and California Legionnaire of the Year 2008, described the maturing appreciation for women’s service, “Women Legionnaires are taking a more active part in leadership at this time.

This is a marked change from when women were placed in clerical and token positions. Women are accepted by peers as veterans and will continue to advance.”

In keeping with the day’s earlier theme, one of those female leaders, Pacific Beach Post 552 Commander Desiree Herrera, was tapped to advance within the District from Executive Board to 2nd Vice Commander.

Also acknowledged at the meeting was Eugene Michonski, Commander of Santee Post 364, the District’s newest post, formed during the past year. Michonski was named 2013 Veteran of the Year for the 71st Assembly District.

Tomas Luna, current Adjutant and incoming Commander of Post 282, summed up the event,

“Our Post enjoys hosting District meetings,” he said. “This was the last meeting of the calendar year, and we went out on a good note with a good event.”