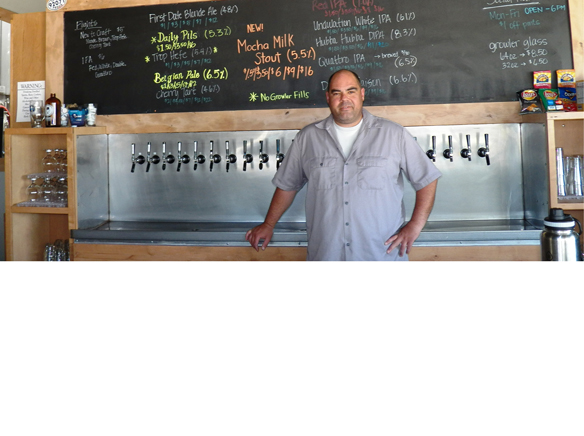 Alert observers of craft brewing enterprises in East County are already aware that three and a half-year-old local brewery Groundswell Brewing Company expanded into Santee in February. Not that Groundswell has been a stranger to the eastern portions of San Diego County. Founded in November 2013, the then-new brewery Groundswell’s original tasting room bar was set up in Grantville, not far off Mission Gorge Road.

Alert observers of craft brewing enterprises in East County are already aware that three and a half-year-old local brewery Groundswell Brewing Company expanded into Santee in February. Not that Groundswell has been a stranger to the eastern portions of San Diego County. Founded in November 2013, the then-new brewery Groundswell’s original tasting room bar was set up in Grantville, not far off Mission Gorge Road.

When URBN Craft Pizza in downtown El Cajon shuttered the brewing side of operations at that location, Groundswell began making beer at the left-idle brew tanks there. And Twisted Manzanita went into bankruptcy, not very long after adding distilling into its business portfolio, leaving its prime brewery location in Santee empty. Groundswell again found its way clear to make use of those resources to grow. By November 2016, Groundswell officially acquired all the former assets of Twisted Manzanita at 10151 Prospect Avenue. A license to brew followed in January of this year, with a grand opening of the Groundswell Santee site on February 12.

Seth Hirschenbein is also no stranger to East County brewing. He worked at Oggi’s in Santee for some time, and then moved to Chuck Alek in Ramona. He has been a sales manager with Groundswell since January of 2016. Hirschenbein praises the husband-and-wife owners of Groundswell, Kevin Rhodes and Christianne Penunuri. “I saw real potential for growth with Groundswell,” Hirshenbein said during a recent interview, and so the expansion into Santee as an added growth location has proven to be, leaving the Grantville tasting room intact as a satellite site. “We have a good atmosphere here in Santee,” Hirschenbein continued. “This place is family friendly, and the owners make everybody here feel valued.”

The Santee site is relatively barebones at this point — clean, airy, with a nice small bar space, one relaxation couch, and tables beyond the entry bar area. Entertainment available at this early stage consists of sport television and several boxed games behind the bar.

What impressed Hirshcenbein about the beer offerings from Groundswell? He mulled the question, then replied, “We focus on the beer,” he began. “We are working on being consistent in the quality of beers that we create.” After a moment, Hirschenbein continued, “Something distinctive about our beers is their pair-ability with food. Our brewers turn out beers with balanced flavor that don’t overwhelm the palate. That probably comes from Kevin being an instructor at the Art Institute. We have culinary students from the school who come in and talk about what a great instructor Kevin is.”

Longtime area brewer Callaway Ryan did a substantial amount of beer-making for Groundswell over at the El Cajon URBN tanks, and Ryan still brews part time for Groundswell. The primary brewers for the operation these days are Zack Hayes and Brent Donovan.

And this brew team really does deliver tasty, quality beers, several fitting into the class of “session beers” around 5% alcohol (plus or minus) so that beer lovers can quaff down a couple of pints with friends, camaraderie, and lively conversation, all without getting inebriated. The First Date Blonde Ale, for example, is at 4.8% ABV, with a clean, crisp freshness, attributable to its New Zealand hops. The Trop Hefeweizen is Bavarian style, clocks in at 5.4%, featuring tropical fruit notes including banana, pineapple and mango flavors. The Daily Pils, a collaboration effort with Chuck Alek, at 5.3%, is a European pilsner with a crisp finish that is easily drinkable.

Hirschenbein noted that Groundswell brews for San Diego, for people who spend time outside in open air and who appreciate clean-tasting beers with low ABV. Distribution sites include beach restaurants and bars, including SeaWorld and the Bahia in Pacific Beach. Hirschenbein said that what he considers the brewery’s “flagship beer” is the Undulation White IPA, which even at 6.1% is crisp and citrusy with appeal to beer consumers across the board. “I think of this as a sunshine IPA,” Hirschenbein stated.

In late May, Groundswell Santee had 11 beers on tap. Hirschenbein said that’s about the usual number, with eight to ten different beers most often available on draft. The variety among the late May brews ran the gamut, from good sour beers to a finely crafted dry hop saison, a very nice Belgian pale ale, and a delicious milk stout the brewers plan to continue experimenting with. One big beer at Groundswell on tap was the Hubba Hubba DIPA, at 8.3%, but again easily drinkable with malt character balancing sweetness and dryness.

“I think our beer speak for themselves,” Hirschenbein summed up in describing the offerings. And that is also distinctly impressive, because the brewing enterprise is still settling into its new larger facility. “Our main focus right now is getting the recipes dialed in,” Hirschenbein said. “We are still figuring out how to brew here,” he continued, citing the new 30- barrel system per batch. “We have to be more thoughtful about what we brew,” he said, in order to determine the relative popularity to consumer of their beers and set a brewing schedule on that basis.

“We need to get the word out that we’re here,” Hirschenbein concluded. “Come pay us a visit.” Groundswell Brewing Company in Santee is open seven days a week at 10151 Prospect Avenue. The brewery’s slogan is “Serving a Thirsty World.” More information can be acquired by phone at (619) 795-2337 or online at www.groundswellbrew.com.