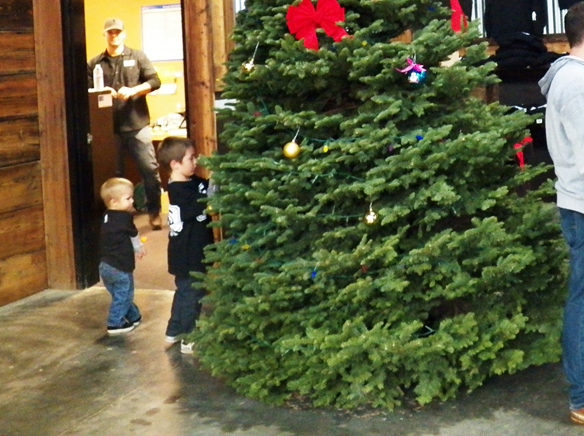 When Santa Claus harnesses his reindeer on Dec. 24, the North American Aerospace Defense Command stands on alert to track lead sleigh-puller Rudolph by the heat signature of his super-lit, red nose-so-bright. According to NORAD’s records, after departing from the North Pole, Santa travels south along the International Dateline then heads westward. He eventually arrives for everyone in East County on Santa’s “Nice List” during the last leg of his world-circling journey, last flying across the United States and South America.

When Santa Claus harnesses his reindeer on Dec. 24, the North American Aerospace Defense Command stands on alert to track lead sleigh-puller Rudolph by the heat signature of his super-lit, red nose-so-bright. According to NORAD’s records, after departing from the North Pole, Santa travels south along the International Dateline then heads westward. He eventually arrives for everyone in East County on Santa’s “Nice List” during the last leg of his world-circling journey, last flying across the United States and South America.

Upon reaching Santee, St. Nicholas will be full of milk and cookies that good children have left for him, and he should heartily welcome more bracing fare. Santee’s microbreweries are more than up to the challenge of energy-fueling Santa’s final Christmas Eve deliveries. And, of course, the seasonal and Christmas beers on tap will well wet the whistles of Santa’s Santee helpers who stop by to quench their holiday thirst.

At BNS Brewing & Distilling Co., brewmaster Wes Richey and his five business partners have been serving up quality beers in a fun, family atmosphere since opening six months ago. The wide variety of popular BNS core beers on the tap list hew to Western-themed names, from the Saloon Girl Saison Ale (a more-than-classic of the Belgian-style farmhouse brew, with layered citrus and floral notes), through Flintlock American Pale Ale (a coppery quaffable brew with a nod to Southern California taste for hoppiness), to Lawmaker American IPA (a West Coast-style light-touch, smooth India pale ale with excellent hop aroma and flavor).

A nine-year veteran of the Navy, Richey interned for a year with Coronado Brewing to learn the craft. He cites preplanning, patience, great partners, good employees, and family support as factors in the “awesome” early success of the enterprise. “We strive to make a quality product,” Richey said, “and to make the best of it each day.” The brewery is dedicated to mutual community support, hosting multiple fundraising events throughout the past half-year.

What does Richey recommend leaving for Santa? A pint of Gatling Gun Imperial Stout, (a hefty brew reliant on roasted malts with complex flavors reminiscent of coffee and dark chocolate) paired with a plate of homemade brownies. But there will be a surprise under the tree too, as BNS will be pouring traditional Christmas ale on Dec. 21 to begin the long holiday weekend.

At Butcher’s Brewing, brewmaster-owner Rey Knight has been serving tasty brews since opening his nano-brewery’s doors in May. One Butcher’s year-round favorite is also a fine beer to match with wintry holidays. Free Range IPA is a rye IPA with flavors of spice and caramel, balancing the lacing of Nelson hops in the mix. Bartender Randy Lewis makes his choice for Santa’s snack from one food truck vendor often on site, pairing Bacon Wrap Donny’s Dawgs with the Butcher’s Brewing Continental Breakfast Stout, which Lewis describes as having coffee and lactose flavors equating to “breakfast in a glass.” Lewis praises Rey Knight for “always trying to do something different, always something new and better than you’ve had before.”

Manzanita Brewing Co., coming up on its fourth-year anniversary in January, still had hearty fall beers on tap in early December. The brewery’s Witch’s Hair Pumpkin Ale is an excellently balanced and challenging drink to the bottom of the glass, based on over 30 pounds of pumpkin per barrel, matched with pie spices, with vanilla and raisin flavors. Night Fighter, English-Style Dark Mild Ale, is another warming dark brew, featuring sweetness and malt layers of flavor, attributable in part to addition of cold-pressed Ethiopian coffee beans to the ale. Another apt selection for countering wintry nights is Gillespie Brown Ale, extra malty and very hoppy, a Gold Medal winner at 2012’s San Diego International Beer Festival.

But Manzanita’s centerpiece Yuletide beer is Night Before Christmas, a mint chocolate stout reminiscent of cocoa and peppermint. The heft of this flavorful dark brew is wrapped in a creamy, delicate drinkability. And this is choice of Manzanita bartender Christie Maconnell to set out for Santa on Christmas Eve, alongside a bowl of vanilla ice cream decorated with a candy cane.

Since 1955, NORAD and its predecessor air defense organization CONAD have plotted the route Santa takes in his journey delivering presents around the world to children of all ages who believe in him. BNS Brewing, located at 10960 Wheatlands Avenue, Suite 101, will roll out the distilling side of business this spring, offering whiskey, vodka and gin. Oggi’s can be found in Trolley Square at 9828 Mission Gorge Road. Butcher’s Brewing is tucked away at 9962 Prospect Ave, Suite E. Manzanita is down the street at 10151 Prospect Avenue.

And as Santa might say, “Merry Christmas to all, and to all a good pint!”

Classic cars bring back the grand old days of summer