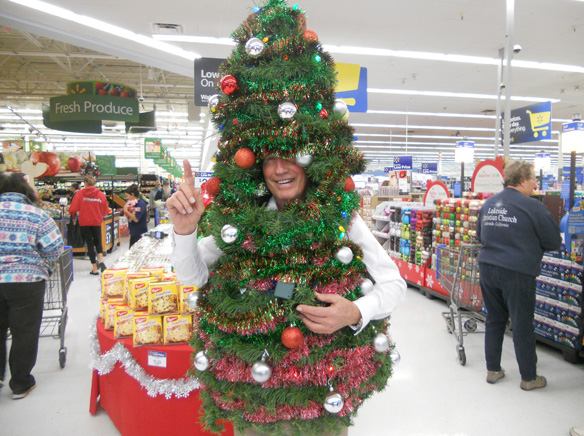 Oh, what fun it is … making spirits bright!

Lakeside Wal-Mart has something that many other stores in the country don’t offer—a singing entertainer/greeter in festive costumes.

Oh, what fun it is … making spirits bright!

Lakeside Wal-Mart has something that many other stores in the country don’t offer—a singing entertainer/greeter in festive costumes.

Mervin Lindner surprises most shoppers when they enter the Wal-Mart store, by busting into song and yelling out a friendly greeting, “Howdy partner! Hi five! Hi Sweetie, Or ‘Oh Christmas tree, how lovely are my branches.” Always something that goes along with the season. This holiday he dressed up as a Christmas tree, a costume he designed and made himself, like most others. He took the metal cage normally used to help tomatoes grow upward which created the framework for the shape of the tree. He cut holes for his face and arms to poke out, then he wrapped it in green garland, six strings of lights with a battery pack and he added some colorful balls. He enlists the help of other employees to get into the tree suit. Folks stop to chat and laugh at him, kiddies are sometimes scared of a talking tree, but he usually wins them over with a thumbs up or “I love you”. During the rainy days of December, Lindner had to stop his duties of greeting and get to work drying off the shopping carts for customers.

Lindner said he has been employed at Wal-Mart for 10 years and just loves his job.

“They wanted me to be a character, with personality,” he said.

Besides greeting folks, he also promotes various items that are on sale at the store. He said he is the number 2 salesman in the whole country and when it comes time for a raise he never has to worry. The present manager encourages his behavior and when she first heard him sing she asked, “What in the world are you doing here?”

Before coming to Wal-Mart, Lindner was a professional singer and square dance caller and traveled all over the nation and foreign countries to entertain or call dances. He mentioned that no matter what country you are in, the dances are called in English. His wife, Marlene, booked all this gigs and he was gone from home entertaining for eight weeks at a time, usually four times a year.

He has retired from other jobs three different times but doesn’t see himself retiring from Wal-Mart anytime soon even though he is 79 years old. He is now working on creating a CD with his son and granddaughters, singing religious songs, and he donates a lot of the sales money to his church.

He and his wife now live in Pine Valley but before they moved there from Yuma, he entertained at three different resorts and also in Canada and Minnesota. He has been the announcer at the Pine Valley parade for 25 years where he sings the “The Star Spangled Banner” and “God Bless America.” He also sings the national anthem at the Alpine Parade. He tried out for the X Factor TV show where there were 15,000 contestants, he made the first and second cuts, but when it came down to the finals, they said, “Merv, you have a beautiful voice but you’re not what we’re looking for.”

When Lindner is not on the job he likes to go fishing and he even shops with his wife and says they have a 50/50 relationship. “I make the money and she spends it.”

The secret joys of coloring as an art and therapy