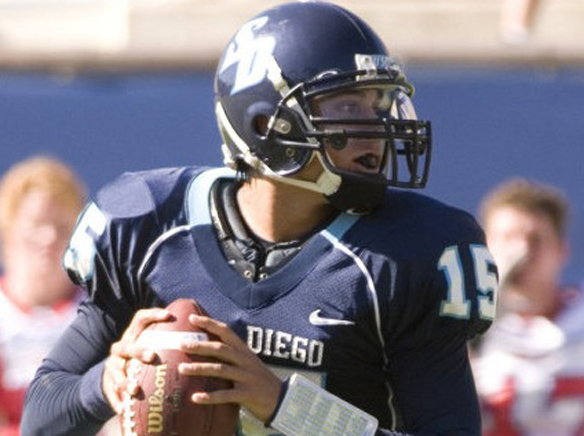 The land acquisition by San Diego Christian College to relocate to the city of Santee recently closed escrow, but an event involving Hawks athletics may not be the next collegiate sports event to be held in the city.

The land acquisition by San Diego Christian College to relocate to the city of Santee recently closed escrow, but an event involving Hawks athletics may not be the next collegiate sports event to be held in the city.

Following Saturday’s football thriller which saw the University of San Diego register a pair of late touchdowns to upend Western New Mexico, 34-27, at Torero Stadium, the head coach of the visiting Mustangs noted his ballclub may be soon coming to the East County.
“We’re looking at bringing our Spring Game to San Diego,” said WNMU head coach Adam Clark, who once was a standout performer for

West Hills High, then earned all-state accolades for Grossmont College. “We continue to get talent from Southern California , so it’s a great opportunity to play in front of their parents. We’ve become a good spot for kids to continue their football career while getting an education.”

Josh McIntire (West Hills) — so allowing his players to return home once per season to play in front of family and friends offers many benefits.

But a snafu occurred in the grand plan.

“We want to come to San Diego every year to play USD — we keep pushing for it,” added Clark. “But USD told us their schedule is full for next season and they can’t host us again until 2013, so we’re looking to play Azusa Pacific out here next year.”

That’s when the idea to move the spring game from Silver City, N.M., to somewhere in San Diego County made sense. Of course, West Hills’ Wolf Pack Stadium would be a prime destination.

“I think our crowd out-numbered USD’s crowd,” added the coach. “So playing our spring game in San Diego would be great for recruiting and fundraising.”

The USD game drew an announced crowd of 4,081 fans. Thus, a gathering of more than 1,000 for a spring game could raise thousands of dollars for the NCAA Division II program. And it could be exciting, too — Western New Mexico’s last Spring Game proved to be a barnburner, with the Purple Team taking a wild 51-50 decision.

Meanwhile against the Toreros (1-1), Western suffered its first setback in two starts when USD quarterback Mason Mills, who attended both Christian and Coronado high schools, tossed two of his four touchdown passes in the final five minutes, including the tie-breaking score with 60 seconds remaining.