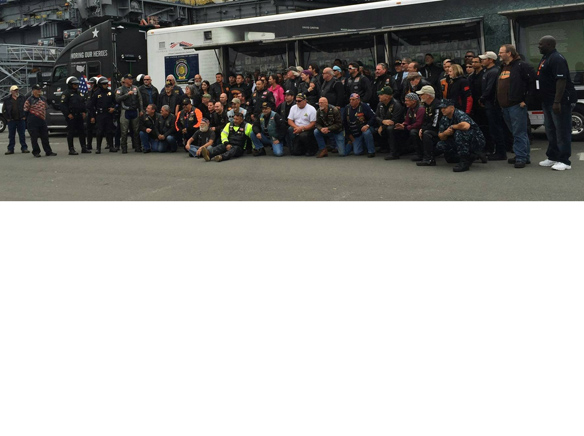 The dark streets of Lakeside were damp from overnight rains, with the weather forecast calling for a 20-30 percent chance of more, uncharacteristic for this time of year. In this Lakeside neighborhood, the quiet of the cool-to-chilly damp air began to include the sounds of a steady stream of motorcycles. In the dark beginning of the early morning nautical twilight, bikers were heading as quietly as possible to Veterans of Foreign Wars (VFW) Post 5867. What motivated these bikers, bundled in leather jackets and chaps or newer textile riding gear, to brave the elements before dawn in a relatively remote part of the county was a once in a lifetime trip to the USS Midway.

Singly, in pairs, or small groups the bikers arrived. After dismounting, handshakes were exchanged with friends, old and new. The most common greeting was, “Good morning, brother.” Each and everyone considered every other biker they greeted a brother. Like all good veterans, they knew there would be hot coffee somewhere, so most walked into VFW Post 5867 for a cup of “Joe.” Looking around, I noticed more trikes (three wheeled motorcycles) than normal, a visible reminder that the Vietnam generation is aging and older legs are having greater challenges holding a two-wheel motorcycle weighing several hundred pounds upright. So many of these vets are swapping out two wheels for the stability of three. Mute testament was the cane being used by one of the older trike bikers.

Bikers would be an appropriate way to describe the group, though veterans are more accurate. Military patches and insignia adorned the jackets and vets, visually proclaiming their branch of service. The majority is gray of beard and from the Vietnam era, with a smattering of younger vets from the Global War on Terror era. For the Vietnam era, the importance of this escort mission is remembering and honoring the 58,300 who didn’t come home. Very understandable, as it was my generation’s war. I wondered, however, why the younger vets were joining us this morning.

Asking some youngsters (at least in comparison to me) their motivation for joining the escort mission, I was told “we are all vets,” “honor those who went before us,” “show respect for the fallen,” and “they led the way.” Each answer resonated loud and clear, particularly since young veterans make up such a small percentage of the overall national population (less than one-half of one percent). With such small numbers, vets from all eras feel comfortable in the company of one another. As the morning continued, I could not also help but wonder if the Global War on Terror vets are borrowing “The Wall” as a surrogate memorial until the day when they are recognized with a national memorial. It also occurred to me that the national attention paid to the Iraq and Afghanistan vets has enabled a growing, but belated recognition of the Vietnam veterans…under the larger banner of acknowledging the sacrifices of those who wear the uniforms of our Armed Forces. Lost in these thoughts, I was brought back to the present by the shout out to form up to get “the word.”

We gathered in the hall at VFW Post 5867, where one of the mission leaders welcomed us all. The greeting went something like this, “40-50 years ago, we woke up, rubbed our eyes, took our malaria pills, unwrapped our smelly bodies from our poncho liners, and were welcomed by rain. This morning, we woke up, put on our glasses, took our heart medicine, and were welcomed by rain.”

To this, someone added a shout, “And we still smell.” After a bit of laughter, the mission leader provided guidance for how the escort mission would be executed, ending (in an emotion laden and somewhat quivering voice), “This isn’t for us, it’s for the 58,300 of our brothers and sisters who didn’t come home.”

Unashamedly and without hesitation, the call went out for a volunteer to lead us in prayer. Doffing our ball caps, we bowed and gave thanks. It was then time to mount up.

In an efficient, orderly, military manner, the bikers staged and awaited the roll out. At about 0630, with an old, restored military jeep in the lead, followed by two bikes with large American flags flying, the procession headed out toward the pier by the USS Midway. Traveling along Route 67, I-8, Route 125, Route 94, and I-5, we headed towards the Hawthorne Street exit leading to the airport and the bay. At 45-50 MPH (roughly the max speed possible for the restored jeep), I had anticipated some problems with the morning commuters. Amazingly and gratefully, there were no problems from my riding position towards the front. Maybe our fellow travellers figured out what was going on, seeing the large American flags waving from the bikes, the procession of bikers, or the emblazoned semi-truck pulling The Wall That Heals. The only reactions I saw were waves of support. By the way, that 20-30 percent rain forecast became 100 perent a couple of times during the ride. As we exited I-5 north and pulled onto Hawthorne Street, a five-bike San Diego Police Department (SDPD) motorcycle escort greeted the procession.

After stopping for a short bit in the far left lane to permit all the bikes to catch up, the SDPD motor officers started up and led us the final leg the ride to pier side by the USS Midway. At one point, a motor officer stopped cross traffic, dismounted, and stood saluting the large American flags flying from our two lead bikes as we rolled by. Joggers and others stopped to watch us, with many waving and offering encouragement. It must have been quite a sight, as the SDPD motor officers with lights flashing led us onto the pier and around to the gangway, where we were greeted by television cameras and other members of the media. Mission complete. The Wall That Heals had been safely and honorably escorted from the VFW in Lakeside to the USS Midway.

Once we had parked and dismounted, a group photo was taken (old, creaky knees were challenged as some of us kneeled down in front of the group for the picture), each rider was presented a commemorative pin, some guys were pulled out for TV interviews, smaller group pictures were taken, and the rest milled about for a bit. Looking up at the Midway, we could see where 58,300 ribbons had been attached to the fencing, in honor of those who did not come home. With the Wall display open, three members of the Combat Veterans Motorcycle Association came to the position of attention, faced the display, and rendered parade deck worthy salutes.

I then overheard one of the vets nearby speak of the rain, saying he “never” rode in the rain, so an extensive cleanup of his bike would be in order. Almost on cue, a light rain began falling, so we mounted up and departed, just as we had arrived, singly, in pairs, and small groups.

As this cool, damp early morning began in Lakeside, veterans from across at least 50 years came together for the honor of escorting the Vietnam Veterans Memorial Fund The Wall That Heals to the USS Midway, where it would be on display, the very first time the museum has been open 24 hours per day. I hope the residents of Lakeside and commuters who were impacted by our mission can understand and appreciate its importance.

Stuff yourself with consistency for better holiday health