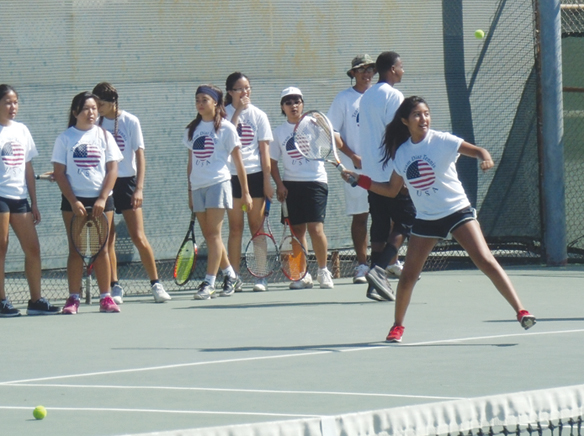 In the sports universe, winning and losing has become the focus for many of the fans, players and coaches alike. The great ones however, know that athletics provide so much more.

At Helix high school in La Mesa, one such coach can be found.

Jesus “Jay” Diaz is a homegrown tennis coach and Tennis for Team Diaz Tennis USA director. Diaz hosted a summer camp for kids of all skill levels to improve their tennis game and gain the fellowship of other players.

In the sports universe, winning and losing has become the focus for many of the fans, players and coaches alike. The great ones however, know that athletics provide so much more.

At Helix high school in La Mesa, one such coach can be found.

Jesus “Jay” Diaz is a homegrown tennis coach and Tennis for Team Diaz Tennis USA director. Diaz hosted a summer camp for kids of all skill levels to improve their tennis game and gain the fellowship of other players.

Diaz said he has played tennis for most of his life. He graduated from Patrick Henry high school and went on to Grossmont College before turning to professional tennis at 19, to some success. By age 26, Diaz was newly married and expecting a child. Diaz ended his pro career to go back to school and focus on his family, he said.

“Regardless of what you do, education is always important,” he said.

Diaz, the head coach of both the men’s and women’s tennis team at Helix, will be entering his 11th season and his 5th year of running his summer camp and said it is all about helping the kids.

“To give back, it’s important,” he said. “It was a kid who introduced me to tennis and as I progressed into playing professionally, you learn that if you never received help you wouldn’t be involved in it. My goal is for them to get out of high school, to get their education.”

The tennis camp lasts for three weeks, Monday through Thursday. Snacks and drinks were provided and participants receive a camp T-shirt all for $70. Diaz said that it is not about the money and that he will help kids by providing equipment or clothing out of his own pocket, if needed.

“For the last five years, the funds have been my wife and I,” he said. “People ask ‘How do you do it?’ It is credit cards that I’m tapped out on, but somehow or another God helps me to continue what I’m doing and does not get in the way.”

Diaz said he is thankful for the support he has received over the years from his family, the kids, Helix high school and the La Mesa police department.

Breanna Williams, 17, has been a part of the Team Diaz Tennis USA camp and school team for three years. She is entering her senior season at Helix and said that was one of her favorite memories.

“A lot of pro players were there, Serena, Azarenka,” she said. “We got to watch them play and hit with them, do some drills.”

Williams said her time here taught her more than how to blast a shot past an opponent.

“Since doing this camp I’ve learned how to lead people,” she said.  “I’ve been one of the coaches in this camp so I learned to teach beginners, intermediate and advanced players at the same time.”

Some players continue to be a part of the tennis program even after they graduate. Kimberly Tran, 18, just graduated from Helix and will be attending San Diego State this fall as a nursing major. Tran said she was the number one women’s singles player this past season, but she is helping pass on her knowledge this summer by coaching with Diaz.

“It’s something that I enjoy and something that I don’t want to give up,” she said. “When I find people who are beginners and don’t even know how to hold a racquet and I’m able to see them improve, it makes me happy.”

Hector Nunez just started playing tennis this past season with Helix’s men’s team. Entering his senior season, Nunez said Diaz has been a tremendous coach and has helped him to compete at a high level in a short amount of time.

“We just have to learn and absorb the knowledge that he gives us,” he said. “He improves us and makes us feel confident in what we learn and with us learning we give back out to the team. It makes us a nice family as a program.”

Tennis began as a hobby for Diaz, a game. But even after it blossomed into a professional and coaching career, Diaz said he still has not lost the joy or passion for what he does or how he can make a positive impact through tennis.

“It has allowed me to help kids that otherwise wouldn’t have the ability to do it,” he said.