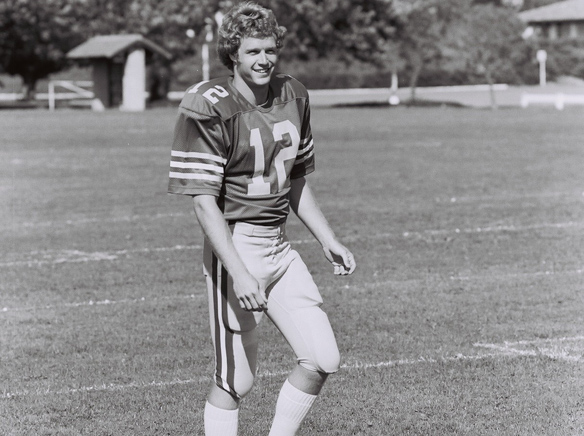 The story of legendary Grossmont College football quarterback Joe Roth will be shared with a new generation of sports fans through the upcoming release of a documentary that chronicles his life.

Taking five years to make, two graduates of the UC Berkeley, Bob Rider and Phil Schaaf, will screen, “Don’t Quit: The Joe Roth Story” as one of the honored selections at the La Costa Film Festival on Sept. 20 at the Cinépolis Cinema in Carlsbad.

The story of legendary Grossmont College football quarterback Joe Roth will be shared with a new generation of sports fans through the upcoming release of a documentary that chronicles his life.

Taking five years to make, two graduates of the UC Berkeley, Bob Rider and Phil Schaaf, will screen, “Don’t Quit: The Joe Roth Story” as one of the honored selections at the La Costa Film Festival on Sept. 20 at the Cinépolis Cinema in Carlsbad.

“We are really grateful for the opportunity to screen our film in Joe’s backyard through this wonderful festival,” said Rider. “Joe loved San Diego and is recalled fondly in the community. It’s a perfect fit.”

Born and raised in El Cajon, Roth led the Griffins to its first state championship during the 1974 season. He then transferred to Berkeley, where he teamed up with Chuck Muncie to pace the Golden Bears to a share of the Pacific-8 crown with UCLA in 1975.

Roth entered the 1976 season as college football’s top quarterback and a leading Heisman Trophy candidate, but his real battle that year would be with melanoma, the most predatory form of skin cancer. First diagnosed with the disease in 1974 at Grossmont, Roth had surgery to remove the cancerous tissue and then monitored the condition via frequent chest x-rays.

Joe went two years without complications, but doctors found a spot on his lung at the beginning of his senior year at Ca.

“It’s a heroic story,” said Schaaf, the film’s writer and co-director. “Joe didn’t tell anyone that he was sick during the season because he wouldn’t make any excuses. The fact that no one knew he was dying is the greatest secret in the history of college sports.”

“Joe’s story has been under-the-radar for almost forty years,” said Rider, the producer and co-director. “But it’s time people learn about a guy like Joe, a person who did things the right way and always took time for others.”

It is certainly still painful for those who knew him.

“I remember how sad it was, taken by a mystery illness,” recalled former Grossmont coach Dave Jordan, a member of the state community college hall of fame and Roth’s former Head Coach. “Joe confided in me at the end of the 1976 season, but I told no one. It’s the way Joe wanted it.”

The producers for JR12 Productions hope the 85-minute film informs a new generation of people to Roth’s inspirational example and generates awareness of melanoma, the disease that took his life.

“The story is told by the players, coaches and people who knew him,” said Schaaf. “Without exception, they describe Joe as a remarkable human being of sterling character and quiet confidence. The only reason no one knows about him is because an awful disease took his life.”

The film was made with great care.

“We wanted to get it right,” said Rider. “So we talked to over 150 people who knew Joe and worked closely with his family and friends to make sure we fact-checked everything. That also gave us time to source photos and film, which wasn’t always easy.”

It was not easy, because not a lot of footage exists as the Bears appeared on television just twice.

“We were helped by Joe’s friends to source material,” Schaaf said. “People like Tom Saska, who played with Joe at Grossmont and the folks at Cal, especially Herb Benenson.”

But Roth’s story is not about his exploits on the field, but his special qualities off of it.

“He always prioritized his friends and academics,” said Rider. “For example, he turned in a paper ten days before he died. That was the way he lived his life, with dignity, a sense of purpose and a complete absence of ego.”

Details on the film festival can be found at: lacostafilmfestival.org. It runs from Sept. 18-21, at three locations: Omni La Costa Resort & Spa, Cinépolis Luxury Cinemas, and the Schulman Auditorium at the Carlsbad City Library.

Santana opens season on a 5-0 streak, best in eight years