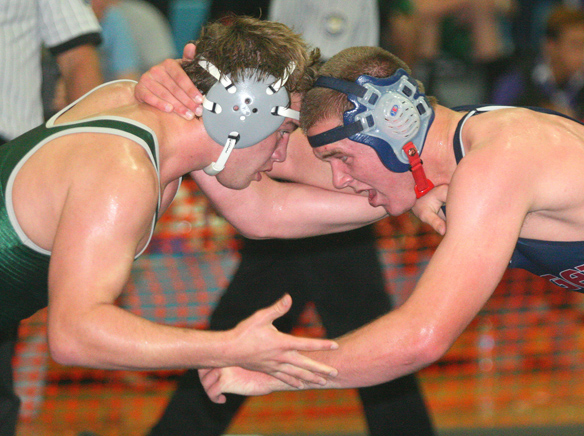 When Steele Canyon High School wrestling coach Dan Kida required hospitalization for a medical condition over the Valentine’s Day weekend, his wrestlers responded in nothing less than championship form.

When Steele Canyon High School wrestling coach Dan Kida required hospitalization for a medical condition over the Valentine’s Day weekend, his wrestlers responded in nothing less than championship form.

Both Cougar mat men came through with shiny medals while competing in the most challenging of the four section divisional tournaments scheduled last weekend.

Fischer made the championship round and placed second in his 197-pound weight class while Forman finished fourth in his 184-pound division.

Both grapplers wanted to win for their coach, win badly.

“He’s coached me for almost all my years of wrestling — he’s a big part of my life,” Forman explained in regard to Kida. “He’s been an inspiration to me ever since he told me he was a four-time CIF champion.

“Hopefully, when he gets out of the hospital, he’ll see this nice CIF medal.”

Kida and the late Glen Takahashi, his cousin, helped forge the future of wrestling in San Diego County. Both competed at Monte Vista High School in the 1960s and dominated the competition. Kida won four individual CIF championships (1966-69) while Takahashi won two (1966-67).

Takahashi, renowned as a coaching legend within the section during a 36-year coaching career at USDHS, El Cajon Valley and Valhalla high schools, died in 2008.

In his own right, Kida ranks among the section’s most knowledgeable coaches.

“He’s brought confidence, he’s brought skill and he’s definitely brought heart – instilling in us to never to give up,” Fischer explained. “He’s worked with me for three years and turned me into the wrestler I am today.”

“It was a huge shock to us when we found out he was in the hospital,” Forman said.

The top three place-finishers at the Masters tournament will advance to compete at the state championship meet March 6-7 in Bakersfield.

Both Fischer and Forman will keep wrestling as long as they can.

Fischer entered the Division II tournament seeded second in his weight class. He won his quarterfinal-round match by a 10-1 major decision and recorded a 3:05 pin in the semifinals.

The Steele Canyon grappler faced Poway’s Chris Bailey in the championship-round, dropping a 9-4 decision to the top-seeded Titan, who improved to 34-5 on the season.

Fischer (32-6) said his goal was just to go out and give it his all in the championship round.

“I lost but it was a good match to show me where I stand in Masters because he’s No. 1 in the rankings,” Fischer said. “I’ve got to come back and work harder and watch film on what I did wrong and correct it.”

Forman entered the Division II tournament seeded fourth in his weight class. He pinned Vista’s Joseph Delgado in 12 seconds in his opening match and then dropped a 12-6 semifinal decision to Poway’s Andrew Tausch, the second-ranked wrestler in the section.

Forman then pinned Grossmont’s Bryce Harmon in 57 seconds in the consolation semifinals to qualify for the tournament’s third-place match. However, Forman came out on the short side of an 8-3 decision to La Costa Canyon’s Brian Hissong in the bronze medal match.

“I’m wrestling a lot better than last year,” said Forman, who takes a 24-8 record into this weekend’s Masters tournament. “I’ve improved a lot since last year. I’m getting a little more technical. This was the toughest division, but it pushed me.”

Forman is especially motivated about competing at the upcoming Masters tournament. He has placed sixth in each of the last two section’s state qualifying tournaments. If he places in this year’s tournament, he will become the first Steele Canyon wrestler in school history to place in three Masters tournaments.

Helix finished third as a team at the Division I finals behind team champion San Marcos and runner-up Rancho Buena Vista. The Highlanders stole the spotlight with 10 Masters qualifiers and three finalists.

At the Division III finals, West Hills placed third in the team standings while Monte Vista was sixth and El Cajon Valley was seventh.