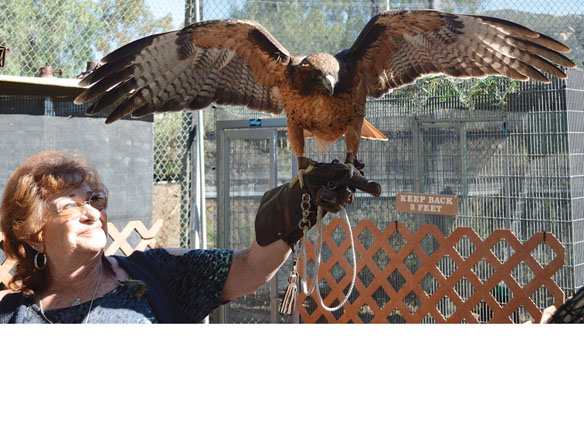 An eagle can break every bone in a human arm without proper gear and handling experience. A Peregrine falcon can surpass 200 mph on a stoop, or “dive,” and the eyes of a great horned owl are bigger than those of humans.

An eagle can break every bone in a human arm without proper gear and handling experience. A Peregrine falcon can surpass 200 mph on a stoop, or “dive,” and the eyes of a great horned owl are bigger than those of humans.

These are facts you would learn if you spent time with Nancy Conney, founder of Sky Hunters in the Japatul Valley. A few winding roads east off Tavern Road leads to Sky Hunters, Conney’s home and rescue for raptors (though it’s not like her to turn away any animal in need). “Raptor” refers to birds of prey — an eagle, hawk, falcon or owl. Sky Hunters has been at its current location since 1996, sits on 11 acres, and rescues approximately 300 birds per year.

In 1987, the road Conney was on led her to raptors, literally. She was driving and found an injured barn owl on the side of the road. She took it to a rescue that happened to need volunteers. Ten years of volunteering and conservation involvement later, raptors had become part of Conney’s identity, and expansion seemed like the natural course. Beginning in Lakeside, she found a property in Dehesa (Sky Hunter’s former location) that could accommodate a rescue facility and convinced her husband to move in. Around this time, Conney lost her partner to a fatal traffic accident. Conney persevered with the planned rescue in the memory of her partner, who was also a close friend. In 1996, Conney was permitted, first by the state and then the federal government to run a non-profit organization and rescue. Since then, she has taken on the life of not just a wildlife rescuer, but a wildlife educator, a conservationist, board member and former vice president of California Council for Wildlife Rehabilitators. Beneath all the titles is Conney’s connection to the animals, as well as the land. Conney’s home and rescue (which is the former Japatul school house, built in 1839) has a Native American feel and reverence. Almost as if the history of the natives and their piety for raptors still exists somehow.

The eagles, hawks, falcons and owls at Sky Hunters are “non-releasable” for various reasons—damaged wings, “imprints”, previous falconry careers—but Conney’s profound respect for the animals and their history creates a harmonious arrangement. Any animal that can be rehabilitated is released to reclaim they sky, and that is ideal. But the birds with permanent residence at Sky Hunters can’t make it on their own, and the care Conney gives them is the next best thing to soaring in the wild.

The raptors that are seen perching on light poles or hunting in valleys are the lucky ones. Only 25 percent of all raptors born every year survive their first year of life. Their biggest threats are, not surprisingly, humans. Other animals eat poisonous pellets used to eradicate raptor prey like gophers like rabbits and squirrels, and the raptors fall victim to what is called “secondary poisoning.” It is also not uncommon to find raptors dead from gunshot wounds. Aside from these man-made hazards, raptors are intelligent and recognize uninhabitable conditions like drought. They will not nest in an area where they can’t nourish fledglings with what is needed to survive.

The knowledge Conney has amassed in her twenty-eight years working and caring for raptors is impressive—she truly, and happily lives, breathes, and sleeps the rescue life. This is no 9-to-5 gig and it suits her fine. She talked about retiring but the subject passes very quickly. Finding someone would love these birds the way she does would be no easy task. Her screech owls hop right on her arm. Standing outside the mew of Conney’s Harris hawk (the only social raptor, polygamous and group hunters), the raptor seemingly communicates with her. She has had a red-tailed hawk for more than twenty years, which has led to an intense trust and bond between them. “I’m going to have a hard time letting go of this one,” she said, in a clear understatement.

Conney is not Native American, therefore not permitted to keep eagle feathers, so she sends any molted eagle feathers to the Native American repository. Raptors molt their plumage twice per year. Her two eagles, one golden and the other bald “are a bit of a mystery,” she said. Instinctively, the two males shouldn’t desire to share space, or even be social with each other, but when Conney had them in separate enclosures, the bald eagle chewed through his mew to get to the golden eagle. The two eagles now share a mew, hanging out together, in all their majesty.

The raptors are not the only aviary presence at Sky Hunters. Conney has chatty parrots, loud ducks and geese, crows and ravens (you will hear the word “Wow!” exclaimed from their mew). The owls have eyes that make it difficult to look away, particularly the yellow, mesmeric eyes of great horned owl, a wise raptor that seeks out abandoned nests of hawks and ravens. The plumage of the American kestrel has a better-than-Crayola-box variety of distinctive, only found in nature colors. Meanwhile, the bald eagle sits on its perch regally, next to his buddy, the golden. Next to the eagles is the ferruginous hawk, which, with a five-foot wingspan, is also referred to as the smallest eagle. Beholding such creatures feels like nothing short of a gift.

Sky Hunters does field trips to nature centers and campgrounds, approximately three days a week. Conney works with home schools, community programs, churches, interpretive centers, and takes her golden eagle to Eagle Scout Ceremonies, as well as military funerals. Sky Hunters is available by appointment on Saturdays and Sundays from 12:00 p.m. to 4:00 p.m. The Sage and Songbird Festival and Garden Tour (www.chirp.org) will take place May 1-3, 2015, and Sky Hunters is a bonus site on the tour. Conney has had up to 500 visitors during the tour.

There is something about the raptors that creates a sense of awe in people. In the mew as in the wild, the raptors have a boundless quality, appealing in it’s undefinability. With Conney, there is no need to try to explain it. She understands.

Sky Hunters is a non-profit, volunteer run organization that accepts members, donations, internships and those in need of community service. For more information visit www.skyhunters.org.