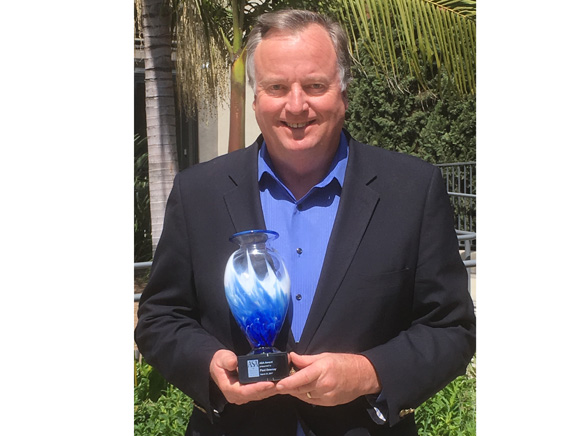 Paul Downey, president and CEO of Serving Seniors, received the distinguished American Society on Aging (ASA) Award for Outstanding National Contributions to Aging-related Service, Research, Administration or Advocacy. Founded in 1954, ASA is the premier national association for more than 5,000 members who seek to improve the quality of life of older adults and their families.

Paul Downey, president and CEO of Serving Seniors, received the distinguished American Society on Aging (ASA) Award for Outstanding National Contributions to Aging-related Service, Research, Administration or Advocacy. Founded in 1954, ASA is the premier national association for more than 5,000 members who seek to improve the quality of life of older adults and their families.

“It has been my honor and privilege to advocate for seniors living in poverty for more than two decades,” said Downey who lives in La Mesa. “I am humbled by this recognition and grateful for the incredible team at Serving Seniors dedicated to making life better for elders in need. They are the true heroes.”

Downey dedicated his award to every senior who has persevered with “grit, determination, grace and dignity” to overcome hardship and remain active, vibrant members of the community.

The award was presented on March 21, 2017 at ASA’s 2017 Aging in America Conference in Chicago in front of 3,000 advocates from across the country.  An ASA Awards Committee reviewed nominations from around the country and selected Downey for the society’s top honor.

“Paul has a remarkable record as a direct service provider for low-income older adults in San Diego. He is also a fierce advocate for older adults at the local, state and national level, and his counsel is often sought by elected officials,” said ASA Board Chair Robert Blancato. “Paul is an innovator who always sees what is in front of him and what is around the corner. He blends front-line day-to-day service work with a deep vision for the future and is an ideal ASA Award winner.”

Blancato noted that Downey’s commitment to older adults has been nothing less than admirable. He has skillfully led Serving Seniors, a nonprofit dedicated to helping seniors in poverty live healthy and fulfilling lives, for more than 22 years. Downey also works with senior advocacy experts on a national level in his role as a member of the ASA Board of Directors as well as immediate past president of the National Association of Nutrition and Aging Services Programs (NANASP). Additionally, Downey is a two-time appointee and chair of the California Commission on Aging (CCoA). He serves on the City of San Diego’s Social Service Advisory Board, is past chair of the City of San Diego’s Senior Affairs Advisory Board and also past chair of the Dean’s Advisory Committee for the College of Health and Human Services at San Diego State University. Downey is frequently called upon by media to provide prospective on issues and challenges facing seniors, as well as provided testimony on several occasions before United States Congress. Prior to joining Serving Seniors, he worked in local government and was also a reporter for various news outlets in the region.

Serving Seniors is a nonprofit agency dedicated to helping seniors in poverty live healthy and fulfilling lives. Founded 47 years ago, the organization meets its mission by offering a coordinated wellness model addressing many senior issues under one roof. Through collaborative partnerships, Serving Seniors is able to provide nutrition, case management, care coordination, mental health services, life-long learning, advocacy and transitional housing for homeless seniors and permanent supportive housing. This safety net of services encourages seniors to live healthier lives by addressing successful aging. As a result, it keeps seniors out of emergency rooms, reduces hospital days and delays and/or eliminates the need for long-term care. For more information, please visit www.servingseniors.org, Facebook or Twitter, or call (619) 487-0701.